‘Cabaret’ to open this weekend 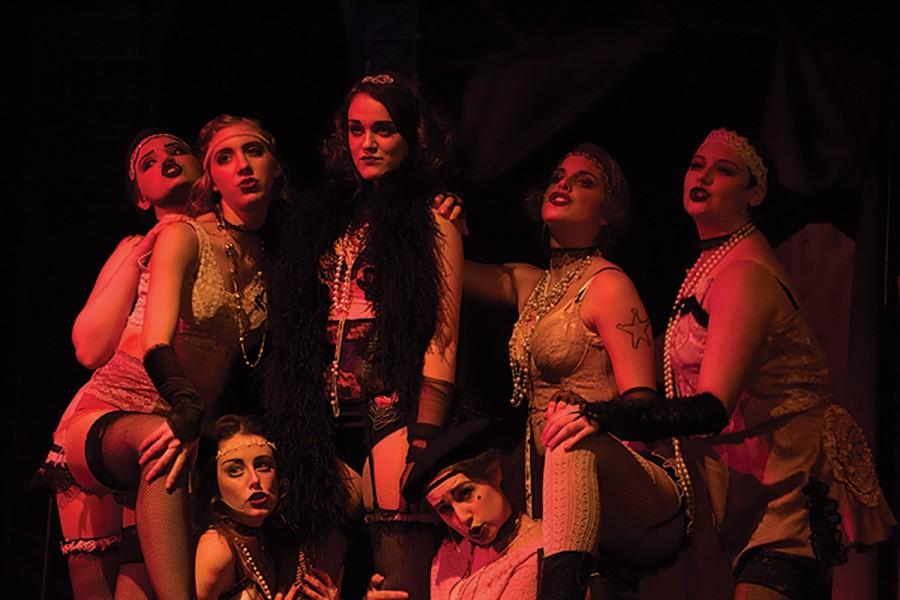 The masses are crippled with debt, their country in ruin and divided within. As political society shatters at its core, from afar one can hear the soft but candid music of an underground nightclub. Its tune fills the ear with a sudden burst of simultaneous ecstasy and unease while seductively pulling you through its door.

Suddenly you are in the presence of a frivolous, bohemian-style dance club, the infamous Kit Kat Klub.

Willkommen. You have arrived.

Such is the scene of UW-Eau Claire’s upcoming performance of “Cabaret.” Set in Berlin during the rise of Nazi-Germany, this musical features sexual promiscuity, political tension and a prodigal love story.

“Cabaret” is centered around the true story of the Kit Kat Klub, a German speakeasy that encourages sexual freedom and homosexuality. The plot surrounds Cliff Bradshaw (Seth K. Hale), an American novelist who has just moved to Berlin and is drawn to the Kit Kat Klub, where he meets dancer Sally Bowles (Audra Boettge).

The production is based on true events, first written as a novel by Christopher Isherwood then adapted into a musical featuring music by John Kander and lyrics by Fred Ebb.

Sebastian Armendariz, a senior music student, plays the role of the emcee, who introduces the audience to the Kit Kat Klub and acts as an an intermediary between “real life” and life portrayed by the cabaret.

“‘Cabaret,’ when it really comes down to it, speaks to the forces of society and different ways people succumb to or react to those forces,” Armendariz said. “As the show unfolds, you really see several characters fold under fear, you see characters become apathetic to what is happening around them, you see characters gain power and strength.”

In regard to the Kit Kat Klub, Armendariz said there’s something “alluring” about the characters as the audience sees them oppressed and targeted, which then raises the question: How does one respond to that?

A performance with historical context and relevancy to the present, it will keep you on the edge of your seat, entranced from beginning to end. Armendariz said this hopefully makes audience members pause and “think about things for a while.”

“This performance is going to make you laugh and probably make you feel uncomfortable. You’re probably going to cry,” Armendariz said. “You’re going to walk out of the theatre thinking, ‘What did I just watch?’”

Autumn Schacherl, a senior vocal performance student who is playing the role of dancer Rosie, agreed.

“It’s a musical that breaks the fourth wall,” Schacherl said. “‘Cabaret’ is super relevant to times now. People are oppressed – a theme that speaks to today’s audience.”

Both Armendariz and Schacherl expressed their overwhelming excitement for the upcoming performance, but many are at odds with the subject of this spring’s musical, as it was originally planned as “Pippin.”

The university’s rights to “Pippin” expired, and since the production is on a national tour, the university cannot get those rights back, Schacherl said.

Armendariz and Schacherl said they were not in the least disappointed about the change up.

“Pippin is great,” said Schacherl, “but I love Kander and Ebb. I love this musical.”

However, short notice of the switch between musicals gave the cast only one month to prepare every aspect of the production: casting, lines, set and costumes.

Theatre professor Arthur Grothe, who has dealt largely with publicizing the event, commends the student’s motivation and hard work.

“This experience mimics the time frame of a professional show,” Grothe said. “[It is] a great learning experience.”

The cast and crew will unveil their production beginning at 7:30 p.m. Thursday in Kjer Theatre.

Tickets are available online, through the service center or at the door.