Bringing laughter to The Cabin 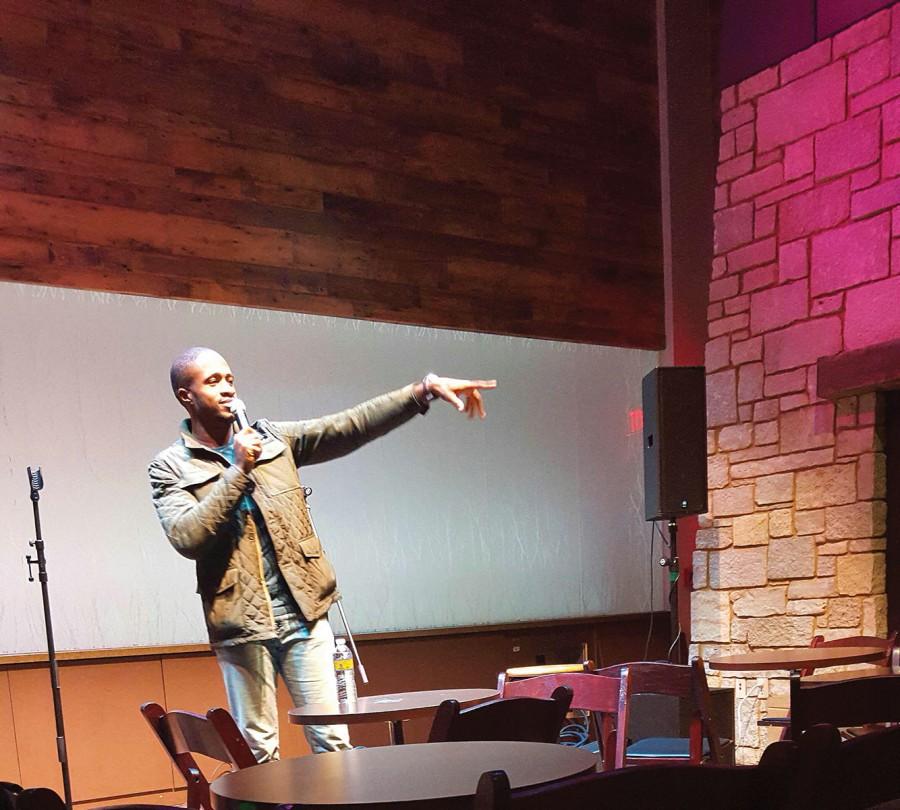 Laughter is the best medicine, and such was the case Friday night at The Cabin when the Clear Water Comedy group came to perform.

“It’s a really unique, amazing feeling to be on stage, to say something and have the entire room erupted in laughter,” Christenson said. “And all of us are constantly chasing that feeling every time we get on stage.”

Every member lives in Eau Claire and met through their mutual love for open mic comedy.

“Yeah, we just all really enjoy performing and there is no better feeling than connecting with people as we share laughter,” James said. “There is something very cathartic, special, and communal about it … the fact that we get to facilitate that for people is really meaningful for us and at the end of the day that is why we do it.”

The latter turned out to be true because a crowd of about 50 people filled the room with an outpour of laughter as each of the six comedians entertained them with their comical storytelling.

Audience member Sophia Thoen said she thought it was amusing to see their stand-up performances.

“It was really cool seeing such vocal talent and versatility in Eau Claire,” Thoen said.

James said it was extremely satisfying to be able to perform their standups in different venues. The group started with open mic at The Plus in Eau Claire, stuck with it for a while and eventually people started noticing, James said.

“It was tough in the beginning, but we kept at it,” James said. “It’s kind of an ‘if you build it, they will come’ type of thing.”

The Clear Water Comedy group said they drew their inspirations from personal experiences and watching their favorite comedians from childhood evolve onto the live screen.

“I was in school for marketing and I got really bad stage fright,” Schenk said, “and I realized that I was going to have to sell things to people so I needed to get better at public speaking.”

Even after that, Schenk said he spent six months writing jokes before he mustered the courage to perform.

“It was a blackout experience but I remember hearing laughter on the other end and have been doing it ever since,” Schenk said.

James had a different experience.

“I was trying to impress a girl, who had already done stand-up,” James add. “On our second date I thought it would be a spontaneous fun move for me to take her to an open mic and not tell her I was going to perform.”

James and Wolff have been together ever since, and are currently engaged.

Chinedu Unaka was the headliner comedian, who did his stand-up of humorous stories, jokes and one-liners following The Clear Water comedy group, which produced a steady stream of laughter from the crowd. Unaka said he performs for this very reason.

“I think that laughter itself is one of the most generous compliments you can give someone,” Unaka said. “You can fake a hand clap after a horrible singer and you can fake a standing ovation, but laughter you can’t fake and I’ve always enjoyed making people laugh.”

“I liked that Unaka talked with the audience a decent amount and kind of worked off that,” Martin said.

Unaka started on the comedy scene in college at the University of California-Santa Barbara. After graduating Unaka said he moved to Los Angeles to pursue his dream of making a name for himself in the entertainment industry.

Unaka wants to make a household name for himself and hopes his comedy is recognized across the globe, he said.

“Be true to yourself and listen to all advice but take what makes sense to you,” Unaka said. “And besides that, have fun and don’t get caught up in the goals…just stick to the jokes and things will work out.”
Clear Water Comedy performs at 9 p.m. every Tuesday at The Plus.