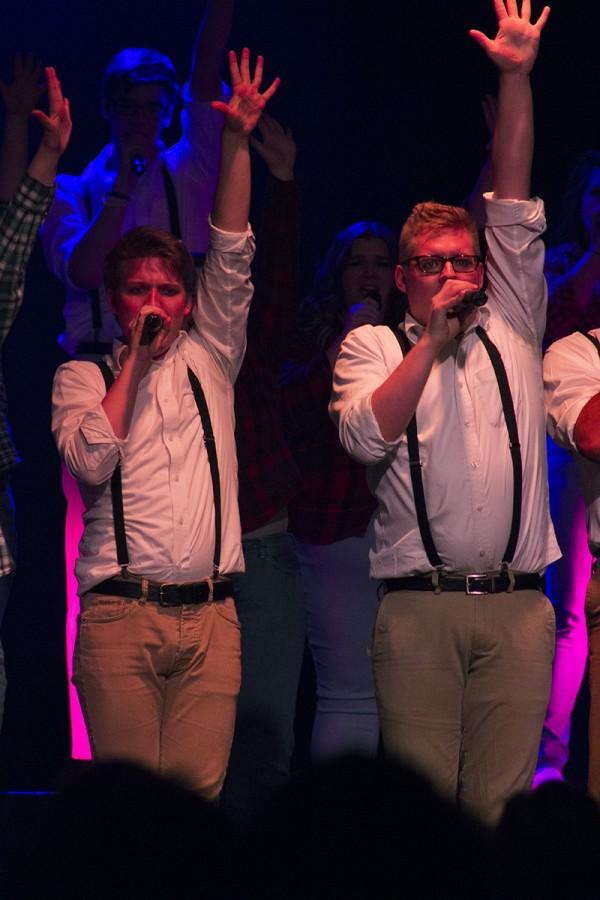 From city to city, from one genre to another and from faster to slower songs, the UW-Eau Claire music and theater arts department’s production of “Cabaret XXXVIII: Getaway” stayed true to its title and took its audience on a truly enjoyable musical journey across the U.S.

The performers’ energy was palpable from the moment the first group took the stage on Thursday, Jan. 21, the 38th annual production’s opening night. Performers were members of the university’s ensembles, including the Concert Choir (split into two groups for the show), the Singing Statesmen, Women’s Concert Chorale, University Symphony Orchestra and jazz ensembles.

Each three-song set revolved around one of 12 major American cities. However, each song in the set could represent a different genre or time period.

When I read in the program before the show that Women’s Concert Chorale’s San Francisco set featured a tune by soul singer Otis Redding and another by rock band Train, I’ll be honest: I doubted them.

But I was so wrong. Everything flowed together, in this set and all the others. Humorous skits performed by the Entr’acte Players between each set helped to smooth any time performers needed to prepare for the next act.

Concert Choir I kicked off the evening with a Nashville set, which to my surprise, did not feature solely country songs. The singers poured their energy into a rendition of “Home” by Michael Bublé, each person on stage clearly emotionally invested in the lyrics.

The true stars of the first act were The Singing Statesmen, who romanced the audience with their soulful New Orleans set. Despite choreography that was clearly exhausting and fast-paced at times, vocals and overall performance never suffered.

Another highlight of the first act came when soloist Cullen Propp brought the audience back home with his performance of Bon Iver’s “Holocene.” Not only were his vocals a nice twist on Justin Vernon’s original, but the orchestra’s instrumentation was simply breathtaking.

Though the number certainly was not what one would call a showstopper, it stood out to me as a nice reminder of where the performers as well as many audience members come from before being swept away in the idealistic images of all of the other large, exciting cities.

The beginning of Act II did not disappoint either. Members of Concert Choir II charmed the audience when they opened with “Viva Las Vegas,” donning elaborate costumes and huge smiles. And, besides, any number with a kickline automatically becomes a crowd pleaser.

The standout of the show’s second half was soloist Brogan Resch’s rendition of Ray Charles’ “Georgia on my Mind.” Resch managed to be sweet and soulful simultaneously, her soprano voice providing a fresh take on the classic song. No questions asked.

Without a doubt the most entertaining and energetic numbers of the show were Women’s Concert Chorale’s “Respect” and the closing number “We Are Family.”

Performed by the entire cast, “We Are Family” warmed my heart, leaving me with a warm, fuzzy feeling as I left the show. “Respect” featured incredible female soloists and fun choreography.

The cast had most of the half-full room on their feet and dancing, singing and clapping along by the end of the song. The students’ energy and passion for the music and performance was contagious and made the entire show one you shouldn’t miss.

The show’s final performances are this weekend, starting at 7:30 p.m. Thursday and Friday nights, with two additional performances at 2 and 7 p.m. Saturday in Davies Center’s Ojibwe Ballroom.