Writers unite to motivate each other to write 50,000 words during November 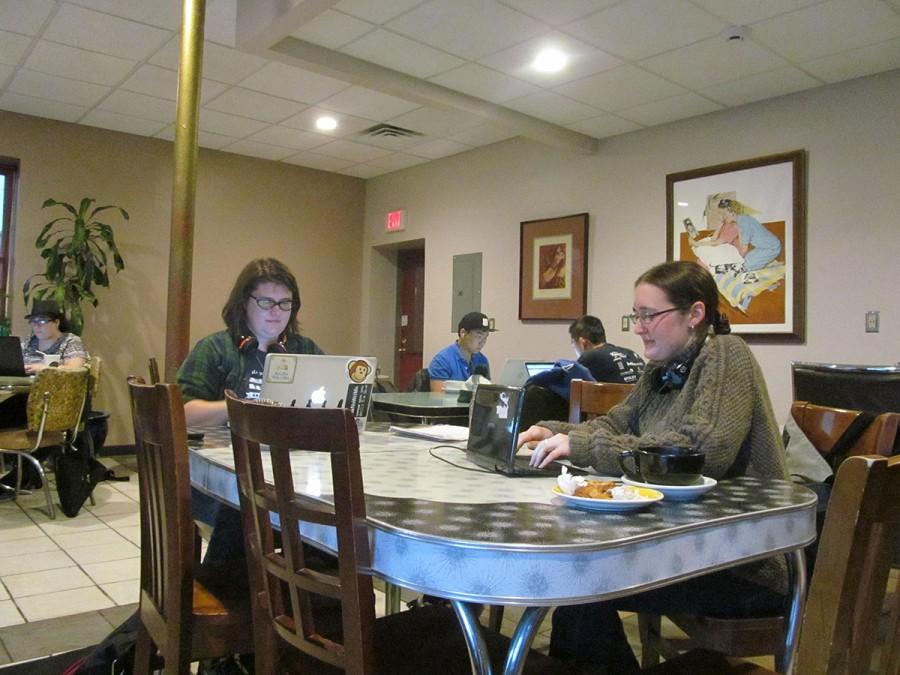 Aimee Johnson and Cheryl O’Brien write during National Novel Writing Month during a write-in at Racy’s.

Writing 50,000 words in a month can be daunting for some, but for the 130 Eau Claire writers signed up for National Novel Writing Month, they accepted the challenge and let their creative juices flow.

National Novel Writing Month, or NaNoWriMo, is a call for writers made by author Chris Baty’s book entitled “No Plot? No Problem!” In the book, he wrote about the concept of writing a novel in a month, because if you give yourself a deadline you are more likely to do it.

Baty started NaNoWriMo in November, and the idea spread nationwide. In the book, he proposed the idea of writing your novel during this month.

Throughout November, writers have met, offered ideas and motivated each other to complete the challenge. Each week there are write-ins where writers gather and write. In order to keep track of their progress, they must write 1,667 words every day, or three pages of standard type.

As part of the rules, writers can outline, plan, plot and write out their story as much as they want before November begins, but the words they write do not count toward the 50,000 words they have to write during the month.

Nationwide, liaisons like Johnson who serve as volunteers, plan events for their community and work with National Novel Writing Headquarters.

Each community is expected to have a kick-off party to get everyone in the mood and inform new participants about NaNoWriMo, a Night of Writing Dangerously (an optional all night write), weekly write-ins and a wrap-up party during the month.

Although there are 130 participants in the Eau Claire NaNoWriMo group, only about 20 people have attended the events associated with the group, Johnson said.

Cheryl O’Brien, NaNoWriMo member in Eau Claire who has attended many events, said they help her focus on writing and not get sidetracked.

“Writers are not always the most social of people,” Cheryl O’Brien said. “But I find that it (going to events) helps.”

Although writing is often considered a solitary activity, O’Brien said she appreciates the events’ social aspects in addition to it motivating her progress.

“Writing is so lonely, a lot of people do not understand why you would want to spend all your time cooped up in a room, writing,” Johnson said. “It is nice to share ideas, and are okay with having people around you typing, not talking. You can be social without being social.”

Throughout the challenge, writers make up their own obstacles such as writing the whole 50,000 words on paper or trying to meet 50,000 words in a weekend.

O’Brien said she writes for about two to three hours each day, and reaches the goals she set for herself. So far, Johnson is a little behind and O’Brien is on mark for this week’s halfway point.