A glimpse into the International Folk Fair 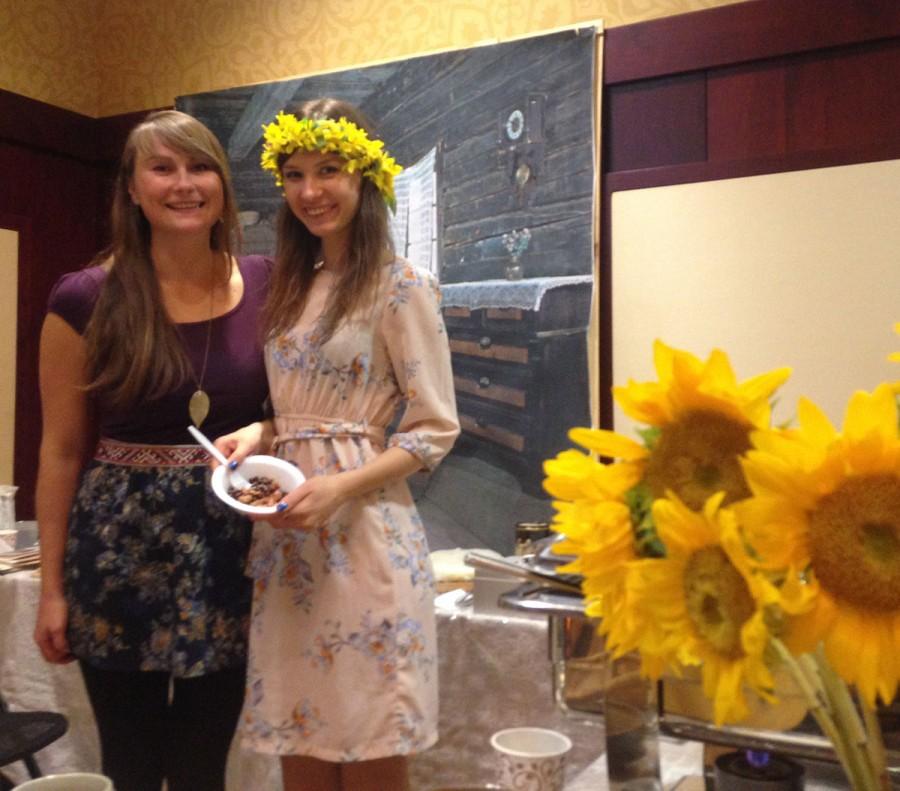 Egija Logina and Laura Freija, both from Latvia, are visiting UW-Eau Claire for the first time since their study abroad experience three years ago. Logina and Freija helped serve bread, cheese, tea and other Latvian foods.

Sunday at the Davies Center wasn’t the typical beginning of the week study scene – there were no students clustered in The Cabin with their nose buried in books and no stress-induced tear droplets on the tables.

A short walk up the steps to the second floor brought a stark change in scenery: people milled about in various traditional garb, national flags lined the staircase and the smell of foreign food wafted through the air.

Directly to the right of the staircase, community members were greeted with Korean pop music, cuisine and students carefully crafting Korean name tags for new arrivals. Down the hall, attendees could experience about nine different African countries and cultures and directly next to that, France.

Stacy Woodward, Intensive English Program Assistant with the Center for International Education, said the fair’s value lies in the opportunity for different cultures to come together.

“It’s so cool to see all the people who make up the (Eau Claire) community represented,” Woodward said.

For others, the International Folk Fair means sharing their culture with those who know little to nothing about it.

Chris Gomes, president of the African Student Association, said the chance to explain his background doesn’t normally come up in daily conversation. Gomes said the one thing he hopes students took away from the ASA part of the fair is that Africa is not one country – there are many countries and cultures within it.

“Even though we come from one continent, we are all very different,” Gomes said. “I want them (attendees) to realize those differences.”

Some exhibits, like the Baltic Student Organization, focused on a specific cultural celebration to educate passerby. This year, the organization centered its exhibit on the Latvian summer solstice celebration.

The Latvian summer solstice celebration takes place on the shortest night of the year. Participants spend the entire night with family and friends by the light of a bonfire. Traditional activities include drinking homemade beer and eating cheese and wearing crowns made of flowers or oak.

Logina described the celebration as one of the biggest parties of the year in Latvia. “After you’ve had a few drinks, you jump over the fire and hope your pants don’t catch on fire.”

Freija said sharing Latvian customs with others comes from a love of their country. Freija said she hopes the International Folk Fair inspires others to travel and experience the cultures they didn’t previously know a lot about.

“Somewhere across the ocean,” Freija said, “there’s a country worth visiting.”