A connector: more than just an adviser 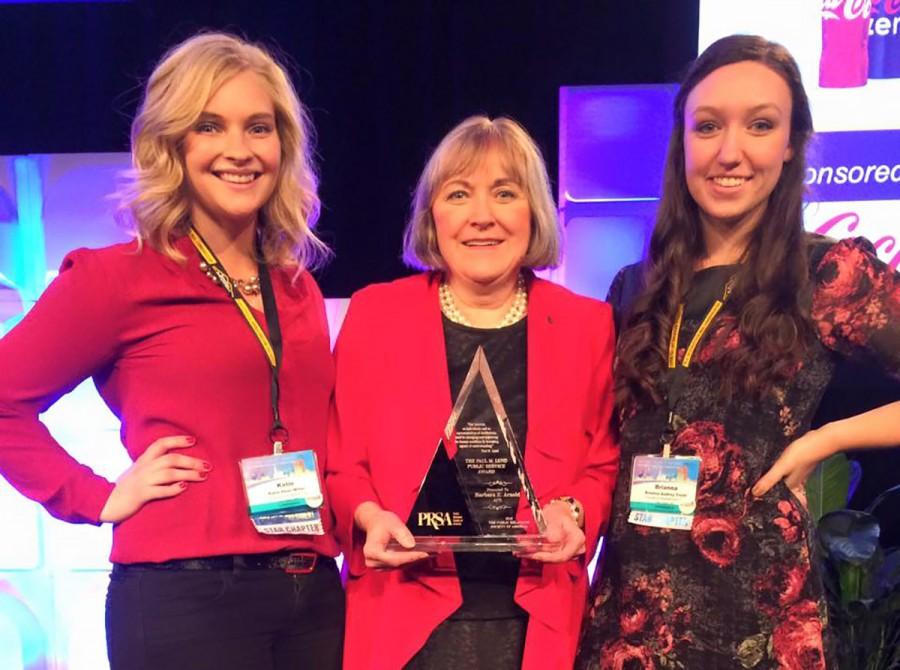 These are the three types of people in the world, according to Malcolm Gladwell’s book “The Tipping Point.”

Connectors serve as hubs in this world; connecting people across different places and different social, political, financial and professional rings, according to Gladwell’s book.

This may be why Arnold became one of 35 public relations professionals in the world to receive the Paul M. Lund Public Service Award at the PRSA 2015 International Conference in Atlanta, Georgia.

This accolade awards successful public relations professionals who are not only accomplished leaders in their fields, but are leaders within their own communities.

“I guess I just have this gift where I can connect people, get them to try something they weren’t thinking of,” Arnold said. “I can listen to someone and hear about what they want to do with their life, hear their dreams, and say, ‘Well, this person is looking for this, (so they should) go talk to this person.’”

Arnold’s award is only bestowed on distinguished public relations professionals whose volunteering has made a significant impact on society. There have been four years in which no one was awarded because the qualifications are so high.

After a successful 30-year-long public relations career, Arnold moved back home to Eau Claire from Minneapolis and downsized her career to take care of her mother as she declined due to Alzheimer’s disease.

In her time back home, she helped found and serves as the UW-Eau Claire chapter advisor of PRSSA while also serving as the university Academic Publications and Curriculum Coordinator.

“If you talk about ‘The Power Of And,’ I would say I’m a connector and mentor,” Arnold said. “…For easily 100 students and professionals.”

Katie Dean Miller, public relations student and current campus PRSSA president, considers herself one of Arnold’s mentees, and said it is she who “has really made all the difference.”

“She’ll drop anything to help anyone who needs it,” Miller said. “She’s not a professor, but in our eyes, she’s more than that.”

Hanna Johnson, past chapter PRSSA president, said her connection with Arnold has been one of her most valuable during her time at Eau Claire.

“Ever since I met her, she’s not only been a mentor, but she’s been a friend and kind of like a mom to us,” Johnson, public relations and Spanish student, said. “I can’t imagine my college career without her.”

While taking care of her mom, Arnold spent her spare time mentoring and volunteering extensively within the Eau Claire community.

The child of a teacher and a bridge builder, Arnold said her motivation to help others and to be a mentor has been lifelong.

“I’d say volunteering is probably in my DNA, but it probably came from my parents,” Arnold said. “I grew up with parents who said ‘For those to whom much is given, much is expected.’”

“She works all hours of the day to make other people’s lives easier,” Miller said. “She’s making our community a better place, and every other community she’s ever lived in.”

Although Arnold’s position at the university was eliminated due to recent budget cuts, she plans to remain the professional adviser of Eau Claire’s chapter of PRSSA as long as she is in the area. At the end of the day, she said what she really wants is to help her students achieve their goals.