Students, alumni and professors alike gather to share words on the topic as a part of the ongoing Risking Everything series 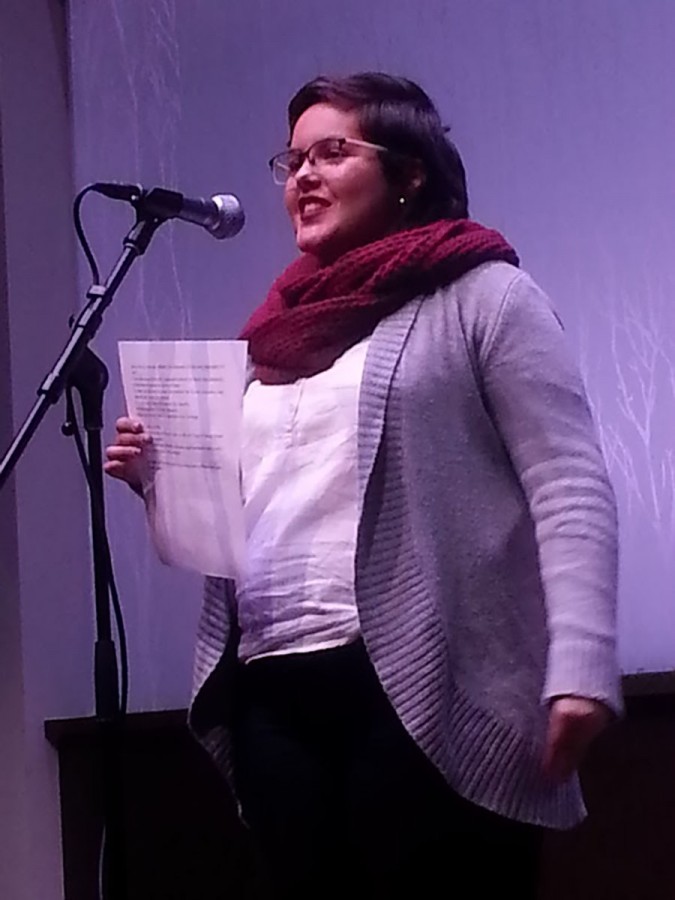 Alejandra Estrada reads to a sizable crowd at The Cabin.

Poetry readings are known to be vibrant events, both vulnerable and empowering. Readers create a mood for the audience, ultimately helping listeners understand their message.

On Oct. 15 at The Cabin in Davies Student Center, speakers shared words about the path toward equality and what it means for them during the readings and discussion event “Freedom Readers.”

Different from other None of the Above (NOTA) events, this reading had a civil rights theme. It was a part of the month-long series “Risking Everything: History and Civil Conversation.

A total of nine students, alumni and faculty who read stood at a microphone and shed light on their ties to civil rights, what it meant for them and where it still needs to go.

The number of observers began with 20, then increasing to the point of standing-room-only intermission.

The audience was silent during each speaker’s time. Only the occasional background hiss of the coffee counter steamer could be heard.

Senior Sarah Hanson, a double major in critical studies and literature, said she felt “the importance of having issues of civil rights present in mind and actions.”

Bystander complacency, speakers emphasized, does nothing for progress.

“How I live my life has more meaning than convincing others,” associate professor of English David Shih said. “To be accountable to yourself is to stay awake.”

Professor of journalism Jan Larson spoke of the work ethic it took to pave her way toward her goals. Her “outrage turned to determination,” she said.

Students Alejandra Estrada and Emilio Taiveaho touched on an inquiry they hear often. Perhaps innocent in its intention, but hurtful nonetheless.

“No, where are you really from?” Estrada said people ask of her.

“I like that you are not from here,” Taiveaho said.

“Not from here” is an assumption, a message Estrada and Taiveaho said they have received time and time again.

Student Kaiah Sexton shared a poem previously written for class. The lines, true to her theme on women’s rights, questioned how society can tack judgements onto people.

“They stare,” she said, holding eye contact with the audience, “upon the label they’ve assigned me.”

After the event, Sexton said her topic is one she is passionate about and seeks to perpetuate.

“We’re told we need to practice what we preach,” Sexton said. “This is a conversation everyone needs to be a part of.”

Flottum said assistant professor B.J. Hollars had invited the speakers to come in, knowing their stories would have impact.

The positive feedback NOTA received from the event, Flottom said, was substantial.

“I’m honored to be a part of this heartfelt event, hearing moving people speak,” Flottum said.

As The Cabin, originally filled to the brim began to clear out, Bob Dylan’s anthem “The Times They Are A-Changin’” accompanied the conversational chatter.