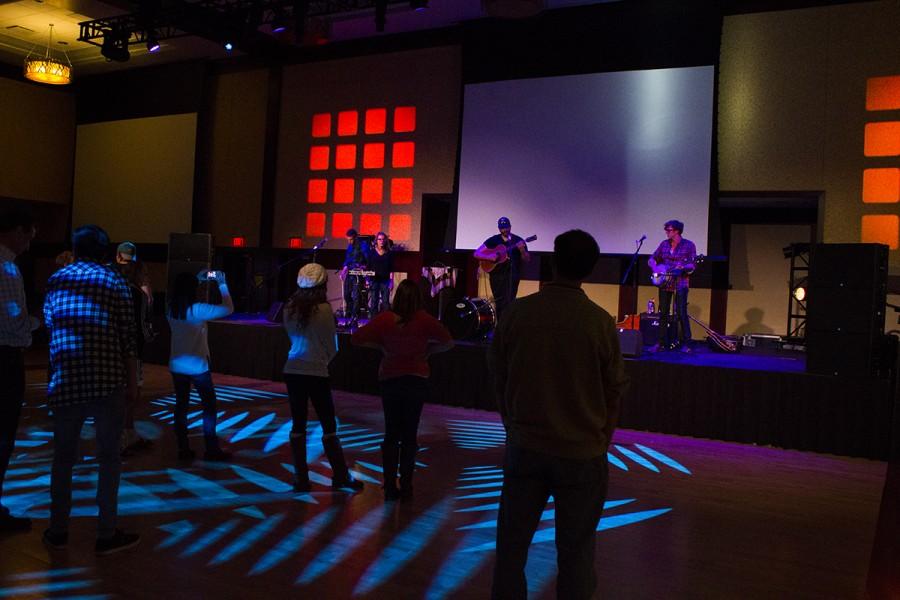 Senior Nick Doherty, a co-chair of The Cabin committee, said he proposed the idea to the University Activities Commission last spring, and from there they began planning.

Doherty and his supervisor Nicole Rindone brought local artist Aero Flynn onto campus, along with five other artists in the area.

Organizing this event to search for line ups fell into place rather quickly. Doherty recruited the artist Sayth because he had great following.

Doherty said he talked to his friend Nick Lanser, frontman for the three piece indie folk band Len Voy, immediately bringing them on board.

The rest of the bands: Idle Empress, Two Castles and Waldemar were quick to follow in joining the festival, as it gave local musicians the chance to perform and share their art with the community.

“We decided to call it a festival because it was a celebration of the music that shapes this community,” Rindone said. “Our goal going into it was to try and expose more students to the local music scene here.”

Eric Wells, better known as Sayth, said they had a good experience with the show and would be willing to come back next year.

“I’ve played quite a few shows with Two Castles but they are usually sweaty basements or small do-it-yourself events,” Wells said. “It was great to hear him on a proper sound system and in a space where I’m not soaked in beer and sweat.”

David Janakey, better known as D. Janakey, said the idea of the event alone made him want to be part of it.

“I wanted to do the show because I love the idea of an event thats aim was to celebrate the art that our local musicians are making,” Janakey said. “Also I needed money for groceries.”

The bands helped advertise this event by handing out flyers and hanging up posters all around campus. The event production crew crafted the lighting and sound for the entire show.

UAC funded this event, and ticket sales went towards band costs. The turnout was relatively strong, an estimate of 100 people gathering for five hours of live Eau Claire music.

“It was a really intimate festival because it was so small,” freshman Becca Wickler said. “That made for some really amazing moments between the artists and the audience.”

The artists were able to bring a unique set to campus, ranging from folk all the way to rap.

“I love taking the chance to discover new music and this festival was the perfect opportunity for just that,” senior John Schiel said.

With the many different combinations of music, UAC, the bands and attendees consider the event an overall success, and UAC plans the event’s return next year.