Singer and guitarist played songs from their newly released album 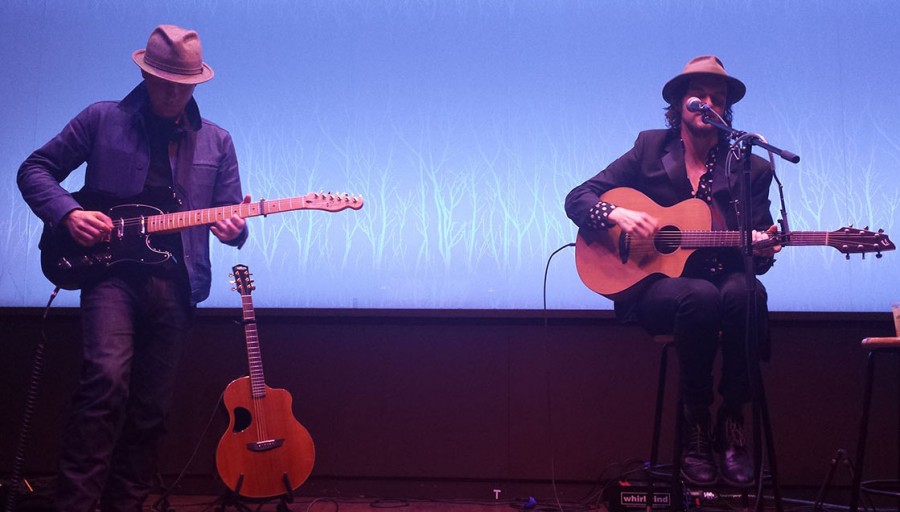 Two men walked on stage, one tall with long hair and a thin frame, the other shorter with no hair and a slightly more muscular build. As different as the two sound, the way they played music together made them one.

Their names are Luke Redfield and Glenn Alexander, and they’ve been a group for around two years. They met on the west coast, a place that has inspired some of the music on their new EP, “Uncover the Magic,” which Alexander produced.

Redfield has also released four other LP’s, one called “The Cartographer,” released in January of this year. When they performed at the Cabin on Oct. 24, the songs they showcased were from “Uncover the Magic” and “The Cartographer”.

The set list featured musical styles ranging from midwestern folk to old Western styles, all inspired by the places Redfield has visited.

“If I’m sitting in one city, living in an apartment, working a day job, that grind doesn’t allow me to get inspired like traveling does,” Redfield said.

In his ten years of performing, he’s traveled across the US, playing coffee shops, house parties and venues like the Cabin, so it’s no wonder he’s found inspiration for so many songs.

Though he’s a traveling man at heart, Redfield said he still views Duluth, MN as his hometown.

He also said that as a child, his first dream wasn’t to be a nationally recognized singer.

“I grew up wanting to be a professional baseball player,” Redfield said. “But that changed pretty quickly when I started listening to music and at age 12 or 13 I realized I wanted to play music.”

His teenage self must be proud, as Redfield has shared the stage with the likes of artists such as Gregory Alan Isakov and Marissa Nadler. He is also gearing up for a national tour.

Redfield will be visiting Iowa, Illinois, Texas, Oregon and 10 other states starting Nov. 1. He’s also going to be in Wisconsin again on Nov. 5, playing at The Frequency in Madison.

Music is said to be a universal language, and Redfield seems to speak of his love for travel and the places he visits through his lyrics at The Cabin.