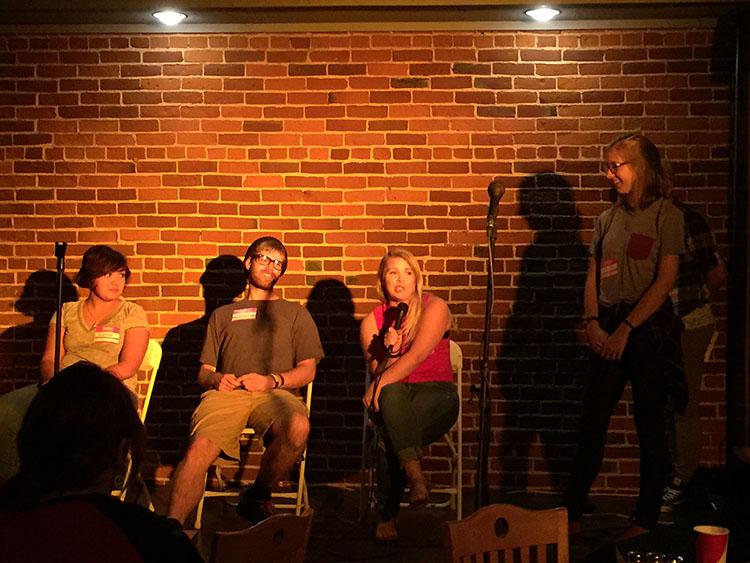 The Plus in downtown Eau Claire helped the community celebrate National Coming Out Day with a night of open mic, music, stand up comedy and the sharing of coming out stories on Oct. 11.

The all-ages event was put on by Q2, a local youth group geared at providing a safe space and resource center for LGBTQ community members.

While the UW-Eau Claire campus has celebrated National Coming Out Day for years, this is the first time The Plus held this event in an effort to get the community involved outside of campus.

“It’s important to have a space where people can live openly, proudly and happily in a supportive environment.” Alex Delakis, junior social work major and Q2 co-facilitator said.

Q2, The Family Support Center, Women’s and LGBTQ resource center, and P.R.I.D.E had tables set up at the event which offered resources and information on their services.

Delakis said he was happy with how many people, youth especially, attended the first ever event at The Plus. At one point there was only room for guests to stand.

Cullen Ryan, local comedian who performs weekly at The Plus, hosted the event and stressed that it was an inclusive and safe space welcoming to all identities from the start.

“It’s so important not to view coming out as an all in or all out thing,” Ryan said. “People come out to different people at many points in their lives, including on stage tonight.”

The three hour event included three musical performances by local bands such as Ideal Empress. It also welcomed a number of open mic performances where people shared their experiences of coming out through various mediums, including song, slam poetry, story reading and a drag king performance.

People ranging from college-aged to 50 year olds got on stage and shared their story, explaining what coming out has meant to them personally.

Among the people in attendance was Claire Armstrong, a freshman organizational communication major who told her story of coming out as a high school student last December.

“I think people have an idea of what it’s like to come out, but some people don’t necessarily understand the severity of other’s experiences,” Armstrong said.

Dawson said it was his second time coming out publically as trans. Even after he first came out as gay, then again as trans-androgynous, and a third time as queer, he still has times when he feels people view his identity as invalid, he said.

“I very rarely, if ever at all, hear people come out as my identities,” Dawson said. “So I felt that sharing my story was important for individuals who may feel the same way as I do … but never get the chance to express that.”

Not many people share their bad stories, Dawson said, and it’s even more important for those to be heard because one can’t expect to always have a positive experience coming out.