John Mark Nelson gives you more at The Cabin 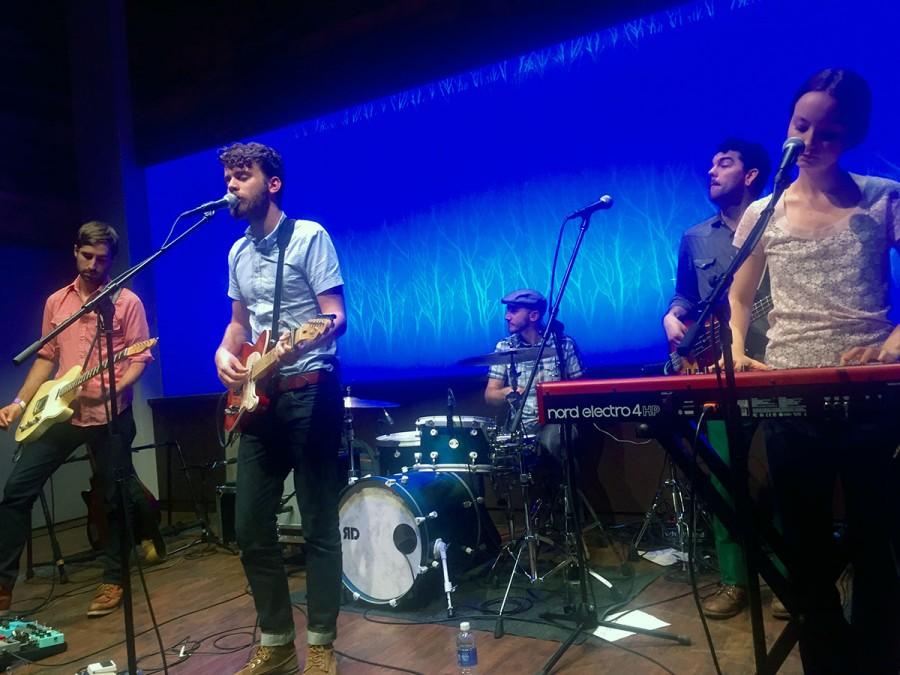 Local indie folk band Len Voy warmed up the crowd at 8 p.m. and played for just under an hour.

The performance served as a “trial run” for their upcoming performance at UW-Eau Claire’s Local Aire Festival next Saturday.

“We told ourselves it didn’t matter if we screwed anything up tonight,” violinist Jake Brunquell said to the crowd between songs.

After quick restaging, John Mark Nelson and his band took the stage, thrilled to be performing their second time in Eau Claire, what he deems “a good town.”

“We spent the day exploring the landmarks of Eau Claire. You know, like Erbert and Gerbert’s,” Nelson joked.

But Nelson and his band are certainly proud of their Minneapolis roots, though he wittily played it off, claiming they only “like it” after the crowd, filled with many Minnesotans, cheered and hollered for the neighboring state’s notorious music scene.

His entire band was able to join him for this performance, unlike last year when only he and backup vocalist and keyboardist Kara Laudon graced The Cabin stage wtih an intimate acoustic performance.

This year, the atmosphere was entirely different, but not just because guitarist Steve Bosmans, bassist Benjamin James Kelly, and drummer Nate Babbs were able to join Nelson and Laudon.

John Mark Nelson’s newly released album “I’m Not Afraid” transcends his last three albums, as he all but abandons the gentle folk sound of his previous three albums, instead turning to more complex melodic instrumentations and a sound better described as folk rock.

The band wowed with his latest songs “Dream Last Night,” “I’ll Give You More,” and “Control.”

“It’s a nice break from his usual sound,” Plaziak said. “But he still holds onto his old sound, he’s just modified it, putting it into a more upbeat tone.”

Crooning songs mostly from his new record, Nelson and his band’s sound rocked The Cabin and kept the audience engaged the entire concert.

Despite introducing a new sound, Nelson made sure he didn’t disappoint longtime fans, playing fan favorites “Boy,” “Reminisce” and “The Moon and the Stars.”

Plaziak also said he enjoyed the band’s visible onstage chemistry, as they danced and laughed while making music together.

“They all seemed to get along really well, and they kept the audience informed about the jokes they were laughing at,” Plaziak said. “They wouldn’t keep it to themselves and awkwardly chuckle onstage by themselves.”

The band visibly enjoyed one another’s company, at times taking moments to simply look at one another, both seriously and playfully.

John Mark Nelson graciously introduced each member of his band, even declaring guitarist Steve Bosmans as “the real star” of the band. By the end of the night, the audience was chanting Steve’s name at Nelson’s encouragement.

“These are some of my very best friends,” John Mark Nelson said before introducing older song “Reminisce.” “I couldn’t do this without them.”

Plaziak said his overall humble attitude and passion for his music was infectious.

“He seemed very happy to be there,” he said. “You can tell he’s a very genuine guy.”

Fellow audience members felt the same. At the concert’s close, Nelson sold his own merchandise and greeted an extremely long line of fans.