“The Amazing Catfish” in review 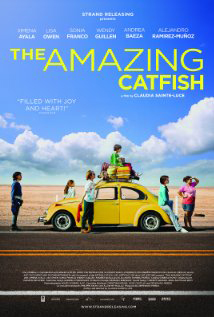 She lives her day-to-day life in total isolation, even when she’s working at the supermarket. One day she’s hospitalized with appendicitis and meets a terminally ill mother who invites Claudia home with her family, where she finds her world and heart become full.

This story had me feeling all the emotions I could possibly feel toward a movie, and I didn’t know which one was the strongest until the screen went black. It was only when I was laying there in the dark did I realize the story “The Amazing Catfish” told was quite beautiful.

My initial concern was the film would be a sappy, cheesy Lifetime movie where they all fall in love and everything is perfect. To my dismay, the film elegantly weaves each character’s highs and lows and makes the whole cast enjoyably dynamic.

Comedy dramas can be a tough genre to break outside the traditional formula to actually seem unique and interesting. I believe this first-time director, Claudia Sainte-Luce, makes the film a heartwarming, intelligent story and is well deserving of her 7 out of 10 IMDb score.

This foreign film begins in total silence as you follow Ximena Ayala’s character Claudia around until it thrusts you into the madness that is Momma Martha’s house, a home to four other children who are add to the chaos.

It was overwhelming, confusing, and it seemed neither me nor Claudia had any idea what was going on. Every character is so contrasting to the last one, I was struggling between laughing, hating and getting all teary-eyed.

The plot of this film is pretty loosely based, but as the pandemonium wears down, I got to connect to everyone vividly. I didn’t get a chance to truly appreciate each character’s feelings and motives until after the movie ended, especially Claudia’s.

Throughout the film, it’s interesting to watch how both Claudia — a complete stranger — and the rest of the family have such a significant impact on each other’s development. Even though the plot is simple, the story behind it is incredibly endearing and worthy of recognition.

Don’t worry, it hasn’t gone unnoticed. The film has won awards at international film festivals such as Toronto’s, Locarno’s, San Francisco’s and others, with a San Francisco judge noting the film as “a warm and exhilaratingly unpredictable dramedy from Mexican filmmaker Claudia Sainte-Luce.”

“The Amazing Catfish” is charmingly simplistic, subtly brilliant and has a chance to melt your heart. Watching Claudia with Martha’s family is a dramatic journey with an ending that puts your tear ducts to good use.

The film will play 7 p.m. Friday, 2 and 7 p.m. Saturday and 2 p.m. Sunday in the Woodland Theater in the Davies Center.