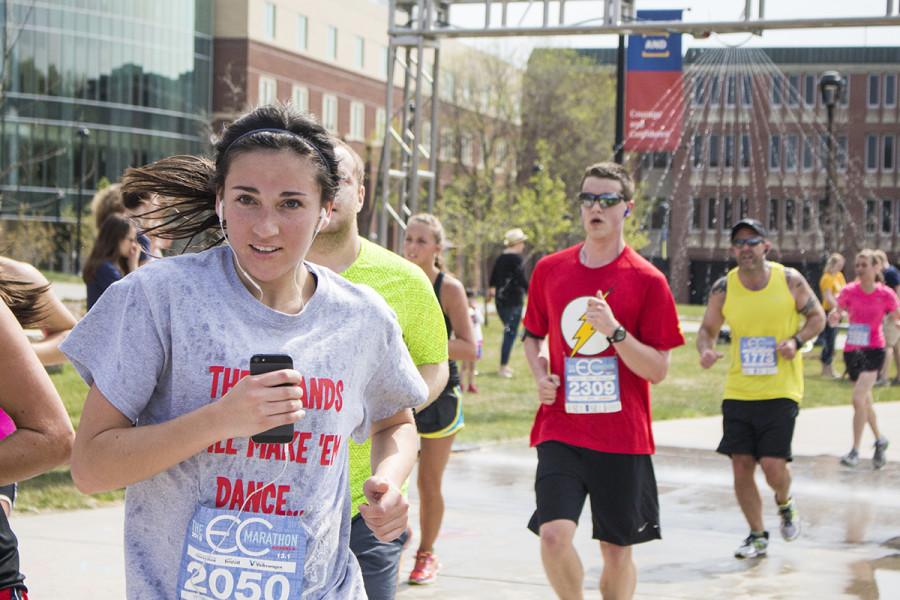 Five years ago, Scotty Hayden wanted to be done running.

The Eau Claire North High School graduate had just wrapped up a collegiate career at UW-La Crosse, and he felt burned out.

But when he returned to his hometown, UW-Eau Claire cross country coach Dan Schwamberger invited him on a run. After seven miles, Hayden had to turn around and walk.

Though they didn’t finish that run together, Schwamberger wasn’t ready to give up on the former runner. He gave Hayden an opportunity to be a volunteer assistant coach for the Blugolds. That opportunity turned out to be the spark that reignited Hayden’s running career.

And on Sunday, Hayden won the Eau Claire Marathon in 2 hours and 46 minutes, flashing the Blugold logo on his jersey as he crossed the finish line at Carson Park.

“I wanted to wear this singlet as a statement,” Hayden said. “It’s a program that believed in me.”

The university was more involved with this year’s race than any other year of the marathon’s running. The course went through the campus mall for the first time, which was called the Blugold Mile. A couple hundred people lined the pathway from Schneider Hall to the footbridge.

“It was in the perfect spot to give me the extra energy and motivation to finish the race strong,” freshman Erin Brault, who ran the half marathon, said. “Plus it was amazing to see how many students and student orgs from UW-Eau Claire were out there supporting all of us runners.”

Fast runs in the family

Not only did Hayden get to represent the team that fuels his passion for the sport, but he also got to share the moment with his older brother, Cory.

The eldest Hayden defended his title in the half marathon by running the 13.1 miles in 1 hour, 10 minutes and 47 seconds.

Both Scotty and Cory Hayden finished about 10 minutes ahead of their next closest competitor. The Eau Claire brothers embraced at the finish line of Cory’s race.

“We don’t live in the same city anymore, and we don’t see each other as much,” Cory Hayden said. “So an opportunity to not only see each other but compete on the same day like we’ve done most of our childhood, it’s a really unique experience that I really enjoy.”

Running has always been a part of life for the Haydens, but the top women’s finisher only started marathoning just over a year ago. That doesn’t mean she’s not up to speed.

Competing in just her fourth career bout with 26.2 miles, Tammi Braund, a mother of six from Cushing, was just looking for something to do, but then decided to get serious about it.

Braund competed at the Boston Marathon two weeks ago and broke the 3-hour barrier. She didn’t quite do that Sunday, but she did win in 3 hours, 3 minutes and 46 seconds, a 4-minute margin of victory.

She said she got out too quickly in Boston, which she felt cost her a bit. While she felt the same fatigue at around the same spot Sunday, she regrouped and led a strong effort into the finish.

“I crashed around 14 miles, and then somehow pulled it together,” she said.

Steph Sjostrom, a former All-American for Schwamberger and the Blugolds, won the women’s half marathon in 1 hour, 32 minutes and 29 seconds.

Freshman Erin Brault was also part of the marathon training class, co-taught by kinesiology professor Tracy Yengo and physics professor Matt Evans. The class had 85 students participate on race day after a semester’s worth of training.

The students in this class substituted blue books for miles of roads as a final exam.