As part of a solo tour, the 29-year-old musician played a variety of folk/pop music for audience 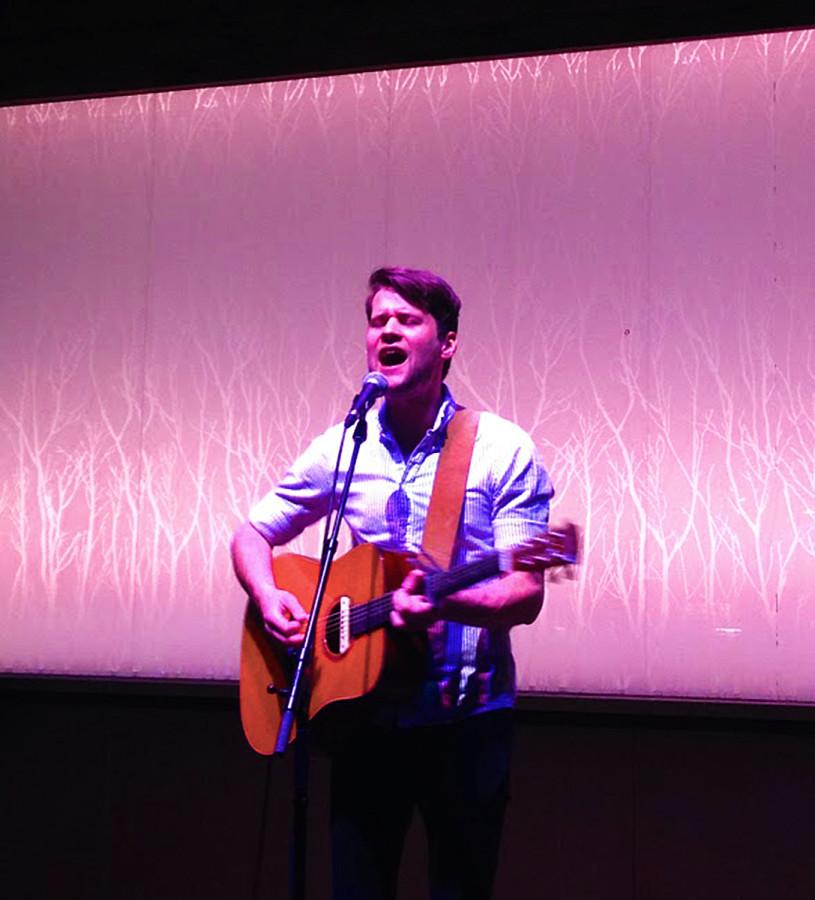 Matt Hires sings to the crowd at The Cabin on Friday.

Crooning to a welcoming crowd Friday night at the Cabin, Matt Hires had the audience singing along by the end of the show.

Hires, a 29-year-old musician hailing from Tampa, Fla., traveled to Eau Claire Friday evening as a part of his independent tour. Classifying his music as “folky, pop, rock,” Hires played a variety of songs inspired by anything from walking his dog to Miley Cyrus.

Hires said he began playing his first shows, so to speak, for crowds at house parties at Flagler College in Saint Augustine, Fla., where his brother went to school. That was before his dreams turned into a reality.

After spending a year and a half at community college in Tampa, Hires decided to focus his time and energy into his musical career full-time. He harbored a passion for music and played in multiple bands back in Florida, which led him to sign with Atlantic Records in 2008 for six years. This is his first year going solo.

Through his deal with Atlantic, multiple songs of Hire’s were features on popular TV series, including “Grey’s Anatomy” and “Private Practice.”

While at Atlantic Records, Hires produced two albums, “Take Us To The Start” (2009) and “The World Won’t Last Forever But Tonight We Can Pretend” (2013).

During his two-part acoustic guitar performance, Hires played a variety of songs, both old and new, from each of his albums, which included “Rock’ N Roll Heart,” “Hold You Up,” “Red Eye” and “Begin Again.”

“I wrote ‘Begin Again’ after spending too much time on Facebook, which made me really cynical,” Hires said. “It’s the most optimistic song I’ve ever written as a result.”

In addition to his own music, Hires also performed a cover of “Kids” by MGMT.

Hires said he attributes much of his inspiration to mindless activities, such as taking a shower or mowing the lawn, because it allows space for other thoughts to come through.

“His songs were written about realistic feelings that didn’t come across as cliche, which was really refreshing,” Sarah Fredrickson, audience member, said.

One of the songs he performed, for example, “Red Eye,” was written about two people who fell in love on a plane that was going down.

“I want to continue touring and building my fan base so that hopefully this can be something stable and long-term for me,” Hires said.