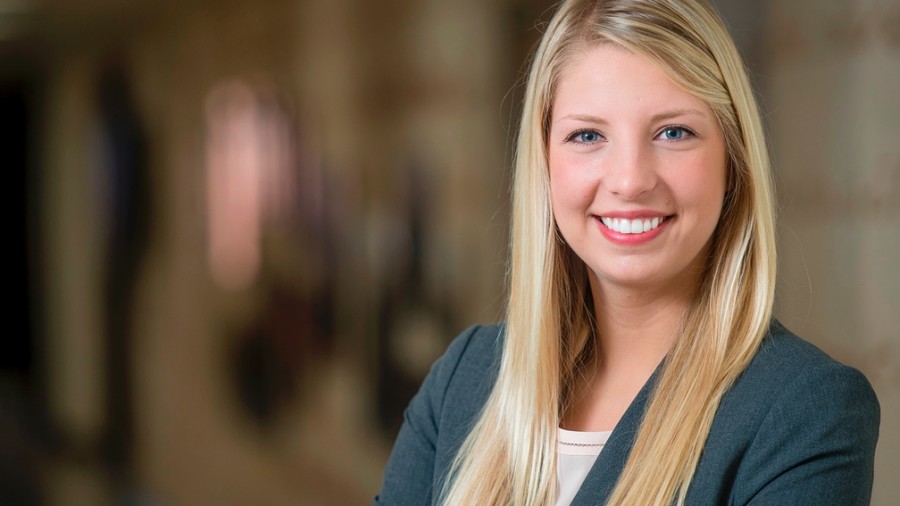 Students are chosen by faculty members who submit a pool of names to be narrowed down to approximately ten candidates. Those remaining candidates are then asked to submit a resume and essay which are reviewed for final selection.

Verkuilen, a junior professional sales marketing major, was both surprised and grateful to be honored with the title, she said.

“I spend so much of my time working with Phi Sigma Epsilon and the sales team so it was extremely rewarding to be recognized for my efforts by the College of Business faculty,” Verkuilen said.

During the first semester of her freshman year, Verkuilen quickly became involved with PSE, Eau Claire’s co-ed national sales and marketing fraternity, because she knew she wanted to pursue a degree in business following her involvement with DECA in high school.

Beginning as a general member of PSE, Verkuilen earned the position of marketing director, moved up to vice president of professional development and from there became the group’s current president.

Verkuilen said former president Tim Bortner played a significant part in her achieving the position as he spent much of his time working with her and encouraging her to take the next step.

“It’s my goal by the end of this year for PSE to reach a gold chapter standing,” she said. “It would be the first time ever in Eau Claire history to achieve that.”

Jerry Kollross, PSE adviser and Eau Claire sales team coach for the past three years has worked directly with Verkuilen and has been a first-hand witness to her positive impact on the group.

“The growth of PSE under her leadership is outstanding,” Kollross said.

Kollross said what sets her apart from other students in the college of business is Verkuilen not only has an exceptional GPA but exhibits senior credentials as only a junior in the program. Verkuilen has completed two internships already in her college career and has yet another lined up with Laird Plastics in Philadelphia for the upcoming summer.

Verkuilen said her involvement in both PSE and sales team has allowed her to build a network for communication with potential recruiters which has given her the ability to acquire her internships.

“I personally believe that the UW-Eau Claire sales program is one of the best in the country and it’s one where students can succeed,” Kollross said. “(Verkuilen) enhances that reputation.”

As a model student who is driven to get as much out of the college experience as possible, Kollross said Verkuilen deserves to be the college of business’s 2015 Emerging Leader.

Thinking ahead to the future, Verkuilen said she sees herself in a field sales position where she hopes to become a sales manager and lead a team of sales representatives.

She is looking forward to working for Laird Plastics this summer as she plans to further explore and consider her opportunities come graduation.