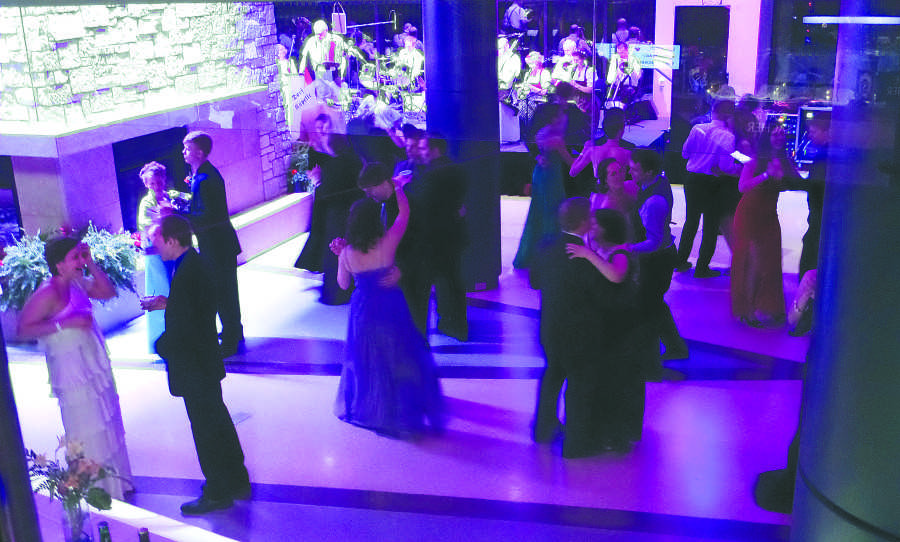 Guests are able to enjoy many forms of dancing at the annual Viennese Ball.

In fact, Stuber’s involvement dates back to the very beginning, 41 years ago.

“When I started, I was the secretary of the ball, and then years later they changed my title to ‘house management and scheduling coordinator,’” Stuber said. “Several more years later, I became the executive director.”

In retrospect, Stuber said “it was a massive change,” but it’s a change that dates so far back she cannot remember exactly how long ago it occurred.

“I’ve had this position for years and years,” Stuber said. “I can’t even remember how many years anymore.”

In the beginning, Stuber remembers the idea of holding a Viennese Ball questioned heavily.

“There was some skepticism regarding whether Eau Claire and the surrounding communities would be interested in the elegance of the evening, and the waltzes,” Stuber said.

The skeptics were clearly mistaken. The first Viennese Ball hosted a total of 688 guests. Today, the event hosts approximately 1650 guests each night.

“Due to the popularity of the event, we now have jazz,” Stuber said. “After 688 people came, we realized we do have that interest. We had successfully created the opportunity for an elegant, special evening such as this.”

Though the tradition of the event has largely remained, Stuber has been part of the Viennese Ball’s many changes over the years, one which stood out most to her.

“Technology has really changed it all,” she said. “If somebody came from 1974 to today’s event they would be astounded by the mass production we now have, though the idea has not changed.”

Another great change came with the building of a new student center in 2012.

“We had to make some major changes after the first year in this building to better suit and meet the needs of the guests,” Stuber said.

Overall improvement from year to year is what really matters to Stuber and the committee, which is why they began encouraging guests to fill out comment cards.

“We realized we needed to make major changes that year, and that’s why we continue with the comment cards,” she said. “We like to find out what guests liked and disliked about the event.”

Immediately following the event, Stuber and the event committee meet to discuss what can be improved for the next year, as well as what changes can be made.

Dedicated to preserving the tradition of a “magical evening” for all guests, the quest for improvement remains each year.

“What we like to do is to have something different each year so that it’s not always the same,” Stuber said. “This year, we have a nationally known silhouette artist who was with us in the early ‘80s.”

Through the committee and Stuber’s hard work, Stuber said the balance between maintaining tradition and making necessary refinements in the event is maintained each year.

“I couldn’t do it without the committee and the vendors and the volunteers,” she said. “There are so many people who are involved in the event, and it’s great to see it all culminate at the event.”

“I love seeing the transformation of the building from the beginning,” Stuber said. “When I hear that first waltz, I kind of have this feeling of satisfaction and release — that now the evening has begun.”

Contributing to the event over the years, Stuber finds a simple yet satisfying sense of pride in what she and the committee accomplish, and personally seeing the enjoyment in each guest.

“The idea of everyone having a sort of ‘magical moment’ at the ball is very satisfying,” Stuber said. “That sounds kind of cheesy, doesn’t it?”