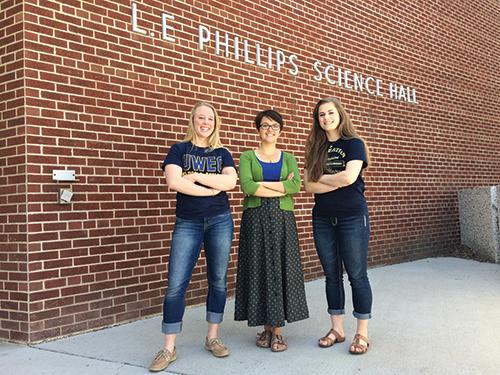 Elizabeth Stubbs and Sarah Knutson were awarded the Goldwater scholarship for their commitment to sciences and undergraduate research in their departments. Kelsey Steinke received an honorable mention.

Despite recently winning what is dubbed as “the most prestigious undergraduate research award,” three UW-Eau Claire science students are quick to credit others for their success.

Elizabeth Stubbs, Sarah Knutson and Kelsey Steinke all have a passion for science. They all say they “basically live in L.E. Phillips Science Hall,” they have all done extensive undergraduate research and now they can add another common accolade to their resumes: they are all Barry Goldwater scholarship recipients.

Stubbs and Knutson were selected among the 260 students nationwide for the award, while Steinke received an honorable mention.

They follow in the footsteps of UW-Eau Claire material science students Tayo Sanders and Max Dylla, who won the prestigious award last year.

The scholarship, named after late U.S. Senator Barry Goldwater, is limited to students pursuing careers in science, mathematics or engineering and includes a $7,500 stipend.

“The Goldwater opens the doors for so many opportunities,” Knutson said.

To receive the Goldwater scholarship, applicants must have strong academics as well as research experience.

Stubbs, junior material science major, said she came to Eau Claire knowing science was her strong suit. However, she was unsure how she was going to apply her love for science to a career. She found herself stuck between physics and chemistry.

“My experiences here have been really great, especially in the material science department,” she said. “I couldn’t have done it without all the support.”

What made material science stand out for Stubbs was the real world application opportunities it presented, she said.

Among the Goldwater gals, Knutson is the only one who came to college with a non science-related major planned out: she was on her way to being an elementary school teacher.

Knutson, a senior geology major with an emphasis on hydrogeology, has focused her undergraduate research on agricultural soil thus far. However, since Knutson’s research professor Katherine Grote is leaving Eau Claire, Knutson will change topics next year.

A change she’s excited and anxious about, she said.

Steinke knows when she needs anything at all she can depend on her material science professors, she said. Even if it’s not confiding in her research mentor, Doug Dunham, she likes having a group of people there for support, she said.

Steinke said access to a variety of instruments has made a world of difference in her undergraduate career, noting she works extensively with machines most students won’t get to use until graduate school.

Last summer Steinke worked full time on her research project, but this summer she will work on a new project at University of Pennsylvania through the National Science Foundation’s Research Experience for Undergraduates.

Eau Claire has been a springboard for the three students into the fields they hope to work in, but their education is far from over. All three have plans to continue their education through a doctorate.

However, they know the process of getting into school beyond Eau Claire may be just that much easier now that they have Goldwater to their name.