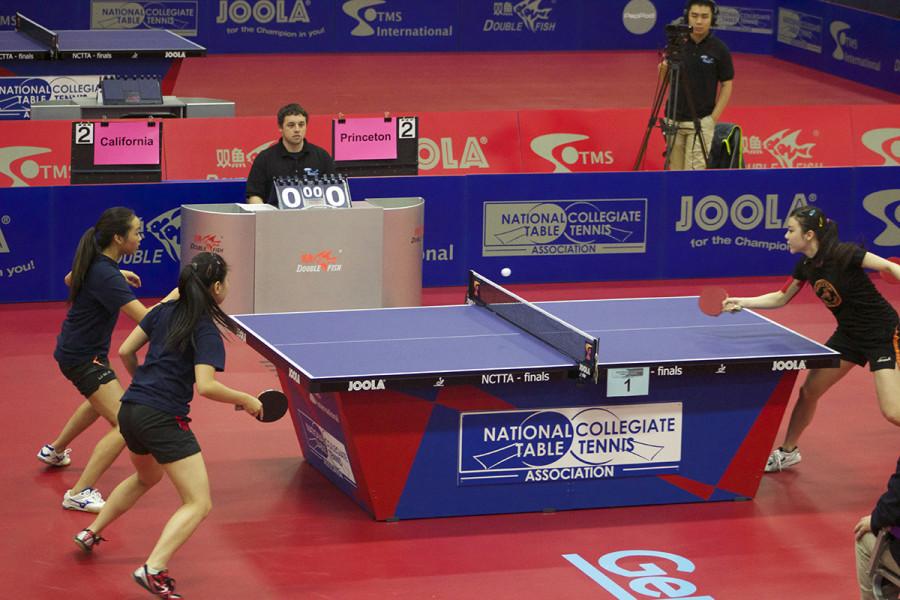 University of California, Berkeley faces off against Princeton University (New Jersey) in the women’s doubles final.

The sounds of celluloid balls rocketing and exhaustion echoed throughout the halls of McPhee Strength and Performance center last weekend.

On one hand, UW-Eau Claire hosted a ping-pong tournament. But on another, more than 40 schools’ teams traveled to Eau Claire to try to reach the pinnacle of their college table tennis careers.

For more than 250 competitors, their years of practice were being tested as the National Championship was within reach.

Of the 40 schools participating, Eau Claire’s ping pong club made it into tournament play. The Blugolds were ranked No. 24 in the Men’s/Coed team category at the beginning of the weekend.

“One of our players took a match against Harvard,” Tollison said. “We broke our seed and we finished No. 23. We went out there wanting to win anything and as far as I’m concerned, it went wonderfully perfect.”

Eau Claire did not place into the championship bracket after being swept by No.1 Texas Wesleyan University, No. 12 UCLA and No.13 Columbia University (New York) in preliminary round robin play.

On the other side of competition, Princeton University (New Jersey) came to Eau Claire listed as the women’s team favorite.

With calculated counterattacks and a national championship to retain, Marisa Chow and her teammates won the women’s team championship for the second year in a row last weekend.

The Co-President of the Princeton University table tennis club was pleased with the changes Eau Claire made to its gymnasium for the NCTTA’s main event.

“It all felt really good,” Chow said. “The lighting was great and ventilation wasn’t a problem at all.”

Playing table tennis with the power and finesse of these competitors, something as simple as which way the air conditioning is blowing or whether a breeze is present can drastically alter the direction a ball goes. When using strong spin on the ball, all bets are off.

“Maybe it wouldn’t have been as important because it was a big facility,” Chow said. “The lighting was very important. Sometimes it’s not always easy to see the ball.”

Difficulty seeing and reacting to the ball has been such an issue that in past tournaments, people had been banned from wearing certain colors.

Besides the team championship, Chow’s teammates Ariel Hsing and Erica Wu won the women’s doubles title. Both Hsing and Wu were members of the 2011 USA Table Tennis National team.