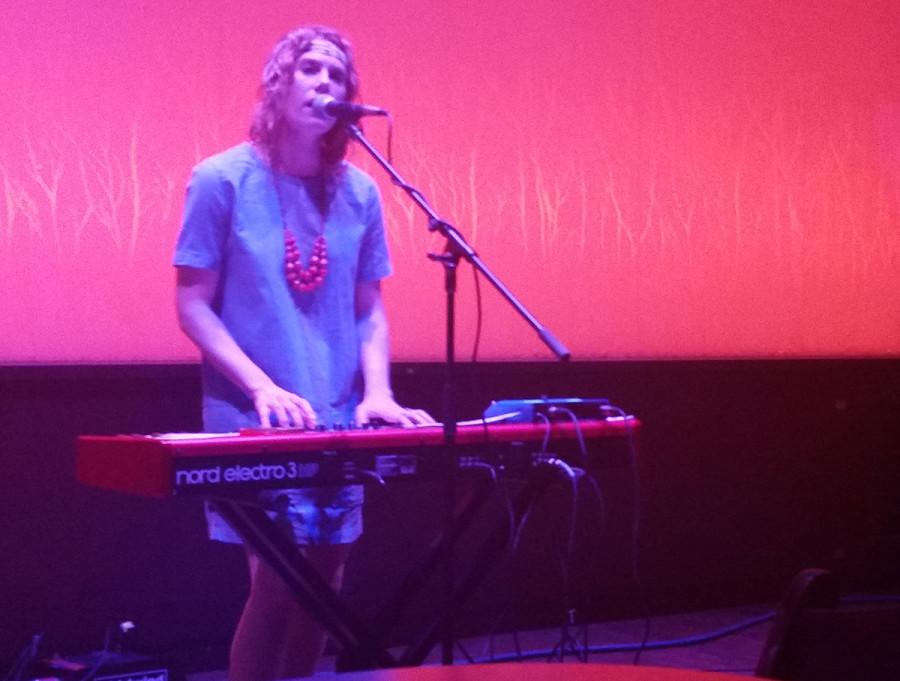 Minneapolis-based musician Jourdan Myers performs “Fire Light”, the title song on her second album, “Ruin Me With Love,” Friday night at The Cabin.

Armed with an electric keyboard and VoiceLive Play, a device that modifies voices, local talent Jourdan Myers warmed up an unfamiliar crowd Friday night in The Cabin by sharing her own take on indie-alternative music and attempts at awkward conversation with the audience.

Myers, a Minneapolis based artist, performed two hours for a crowd that grew from just a handful of members to over 20 by the end of the night, thanking them for coming and apologizing for her awkward comments.

“I’m going to take a drink of water and then I’m going to play the next song,” she told the crowd. “Sorry, I’m awkward. Sometimes it works and sometimes it just makes people uncomfortable.”

Awkward, maybe, but the audience was supportive of Myers all the way through, clapping and stomping along when asked and cheering her on.

Matthew Mantel, senior philosophy major, was in attendance for the performance but had seen her perform in January at Acoustic Cafe, the only other time she has played in the area.

Mantel said she reached out to him on Facebook, asking him to bring friends to her show, and he did not disappoint, bringing two others with him.

He came to the performance because he wanted to hear her music again, he said.

“I thought she was really inspiring,” he said. “Her whole outlook on alternative music is refreshing. She had this indie electronica style, which I like.”

While he could sense Myers was nervous playing for an unfamiliar crowd, he could tell by the end of the evening she had taken control of the room.

“As the night went on, the second half especially, there was a lot more confidence and enthusiasm on her behalf,” Mantel said. “She just kind of warmed up and I felt like that was really cool to see that transition, her feeling comfortable to perform.”

The set included many songs off her second album, “Ruin Me With Love,” and covers by some of her favorite artists, all of which she incorporated her own unique style.

Overall, Myers said she enjoyed the night and had a fun time, despite a few minor bumps in the road. Her favorite part was having the room full of people who didn’t know her but were willing to listen.

“That’s always a challenge is finding new people to play for,” she said. “It was really fun to be in a room full of good listeners. People stayed for the full two hours and they didn’t get bored. That was really encouraging.”

While she first began doing music professionally last June, Myers said she has been singing and playing the piano since before she could read. When she was younger her mom would make picture flashcards of the words so Myers could sing them.

“My mom had drawn pictures of symbols of like raindrops on roses and whiskers on kittens,” she said.

She went on to win her high school’s Eden Prairie Idol competition and sang around her hometown. Though she wrote and released her first album around the time she graduated with a Spanish major and business minor, Myers took a job in investment banking for two years after graduation.

Then, after suffering from a serious illness, Myers left her job and saw the opening as a chance to return to her musical passion.

“I was like ‘this is my chance to reinvent myself’ and so I took the opportunity,” she said. “Since I just kind of finished my second record, I was like I’m going to take this opportunity to just start over.”

Her favorite part about writing music is that, while it is hers, it’s also whatever the audience makes of it.

“Once it’s out of my mouth, it becomes someone else’s story,” she said. “It can be thousands of stories because it’s meaningful to everyone. And I would hope that through that people would feel known and understood because the music was able to articulate something maybe they haven’t been able to say.”