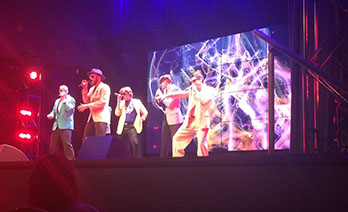 A cappella group Fifth Element was the winner of The Sing-Off: A Cappella Gives Back Saturday evening, a performance and fundraiser for local charities.

On Saturday, five a cappella groups took the stage in Schofield Auditorium for The Sing-Off: A Capella Gives Back. Half the proceeds went towards the winners’ chosen charity, and the other half was split between the other four groups’ charities.

“I think this was the best fundraiser I’ve been to,” Karina Moen, audience member, said. “It was really fun and entertaining.”

Along with the purchase of a ticket to attend, people were also encouraged to donate throughout the show. This was coupled with a $1,000 donation given by U.S. Bank. Money raised totaled $4,372.83 by the end of the night.

The group performances were very lively and upbeat. Another audience member, Sammy Lefaive, enjoyed the show.

“I loved the choreography and show overall,” Lefaive said. “It felt like I was watching a game show.”

Throughout the event, audience members were encouraged to Tweet using the hashtag #singoffec. Questions were posed via Twitter, which were answered by members of the singing groups backstage.

Chancellor James C. Schmidt, Cathy Reitz and Nikki Harper judged the event, all of whom have musical backgrounds. Judges provided feedback after each song was performed.

This allowed the groups to come back for their second performance knowing how to receive more audience votes.

Performer and group member of Audacious, Alyse Weber, spoke about the excitement of the show.

“Rarely do we get to sell out for our own concerts, so singing for a packed house was really fun,” she said. “Also, knowing that we gave a performance we were proud of was exciting.

As a sixth semester member of Audacious, Weber thinks of her a cappella group as more than an ensemble.

“We spend so much time together, it feels like they are my family,” she said. “They are the people I go to for whatever I need.”

Audacious chose to sing for the Sojourner House, a homeless shelter in Eau Claire.

“We chose it because we wanted to give back locally,” Weber said. “Sometimes it’s missed how privileged we are so we thought why not give back to people in the area.”

After ten overall performances, Fifth Element was announced as the winning group and was awarded a check from U.S. Bank.

Audience member Danielle Jensen was happy with the outcome.

“Fifth Element was not only vocally good, but they were funny and they kept me wanting more,” Jensen said.

With regards to the charity event overall, Jensen thought it was a creative idea to give back.

“It’s really cool that the performers get to support a charity and the crowd gets to as well,” she said. “No matter who wins it all goes to a good cause for each charity.”