A change 50 years in the making 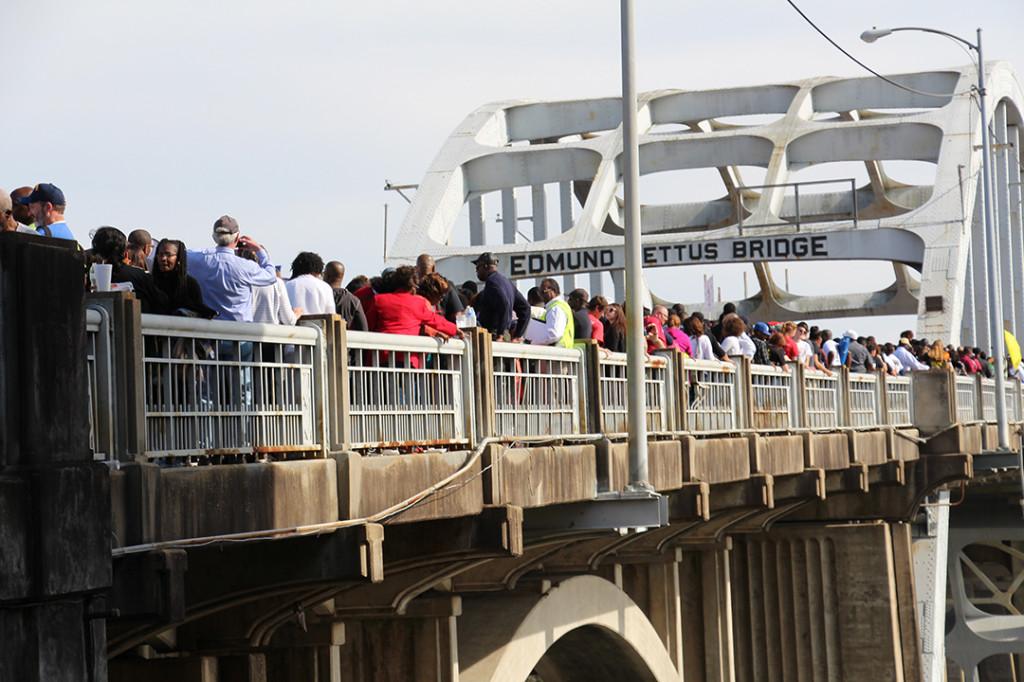 After visiting Selma, Ala. with a group of students this past week, Associate Dean of Students Jodi Thesing-Ritter said she’s even more excited about bringing another group of students on the Civil Rights Pilgrimage over spring break.

Thesing-Ritter said being there for the 50th anniversary of “Bloody Sunday,” when state troopers violently attacked civil rights marchers on the Edmund Pettus Bridge, was a powerful experience and is something that will carry over to the students going down over spring break.

“Students will be in awe of the amount of time that has passed and how much work has been done, but also saddened by how much there still is to do,” she said.

While the Civil Rights Pilgrimage is an experience in itself, another alternative spring break possibility is the Selma-Eau Claire Exchange, a project that grew out of the pilgrimage.

Josh Nesja, director of the Selma-Eau Claire Exchange, said this project was the work of two students in particular who really enjoyed the Selma experience itself and heard they hosted an alternative spring break.

Thesing-Ritter then suggested Nesja be in charge of taking down a group of students to spend a week in Selma. Nesja said he’s seen a lot of change in the students, some of whom signed up for the trip just to get away from the cold Wisconsin winter.

“Some of them were really dedicated to doing service, but some of them just wanted to get out of here,” he said. “Those students that were kind of in that mentality, when they came back they were completely different people.”

Last year, the trip began with a tour of the city in which they learned about the history of slavery and civil rights. They also learned a lot about the demographics of the area.

During the civil rights movement, the population of Selma was about half African American and half white, but currently is closer to around 80 percent African American, which Nesja said is in part because white community members moved away, forming their own private schools and community outside of Selma.

“All the public schools are completely African American,” he said. “It’s kind of like walking into a time capsule during the Jim Crow Laws.”

While down there, students volunteer in the schools, sometimes teaching classes in certain subjects instead of the teachers. Because the funding is so limited, Nesja said it’s likely the teachers don’t all have the educational background they need.

In addition to textbooks that are several years old, worn and tattered, he said bathrooms lack necessities like soap and toilet paper for their students because there just isn’t the money.

“It’s kind of scary,” he said. “Not only is it in a bad place, but it’s setting itself up to an even worse scenario as time goes on.”

The exchange students also work with Random Acts of Theater Company (RATCo), a group created by an organization called the Freedom Foundation.

“They have students in the community dance and get together and do positive things instead of doing what a lot of the young people tend to do, which is gang activity, drugs,” he said. “RATCo provides kind of an escape from that and an outlet to express themselves.”

Nesja, who works in the Office of Multicultural Affairs, said trips like this are beneficial not just to members of the Selma community, but also to the students from Eau Claire.

“We hear a lot of students that are dealing with these issues every day, racism, microaggression, things like that,” he said. “Hopefully trips like this will take a very homogeneous population with very little diversity and change some of those perceptions they have about people of different backgrounds and … really make this campus a little more culturally aware.”

Larrick Potvin, a freshman social work major, went on the Civil Rights Pilgrimage over winter break and, after returning, signed up for the Selma-Eau Claire Exchange over spring break.

“You went and learned about places and how much they changed,” he said. “But when you went into Selma on the Civil Rights Pilgrimage, you kind of see how nothing’s really changed, how there’s a lot of poverty and still segregation and I wanted to learn more about that.”

RATCo, however, is an exception. He said one of his favorite parts was working with this organization and interacting with the students involved.

“That was really cool because you got to see that there’s some sort of change going on there,” he said. “They’re trying to work toward a better future, but at the same time, they’re stuck in the past a little bit.”

Olympia Smith, senior social work major, is one of four student coordinators on the trip and has gone down to Selma with the Civil Rights Pilgrimage and the Selma-Eau Claire Exchange in previous years.

As student coordinator, she helps plan the event, including making the itinerary and preparing for anything that could go wrong.

“We’re just building on the experience we had last year and seeing what improvements we could make,” she said.

Smith said her favorite part about the trip is working with RATCo and the Freedom Foundation as well as the interactions they have with everyone. She said it’s a very emotional experience.

As for the students going down this year, she said she hopes they can better understand Selma, outside of what they hear through the media.

“I hope it’ll really open people’s minds and see the struggles that are still going on,” she said. “Then bring back what they learned to Eau Claire and provide it to this community and whatever future careers they are working toward.”

Ali Konz, sophomore liberal studies major, is also a student coordinator but said it was her and classmate Lexi Harris’s project in a women’s studies class that created the Selma-Eau Claire Exchange.

After going on the Civil Rights Pilgrimage, they created a social change project involving going back down to Selma to help the children and then bringing them back here. Three months later, the project became reality.

Konz said she hopes students realize how much of an impact the trip can have, not just on the Selma community, but back in Eau Claire and throughout the world.

“Comparing it back to what we have or what other places have, and then kind of using that to shape your understanding of the world around us,” she said. “So many things could be done differently, done better, and just seeing how much our world needs each other.”