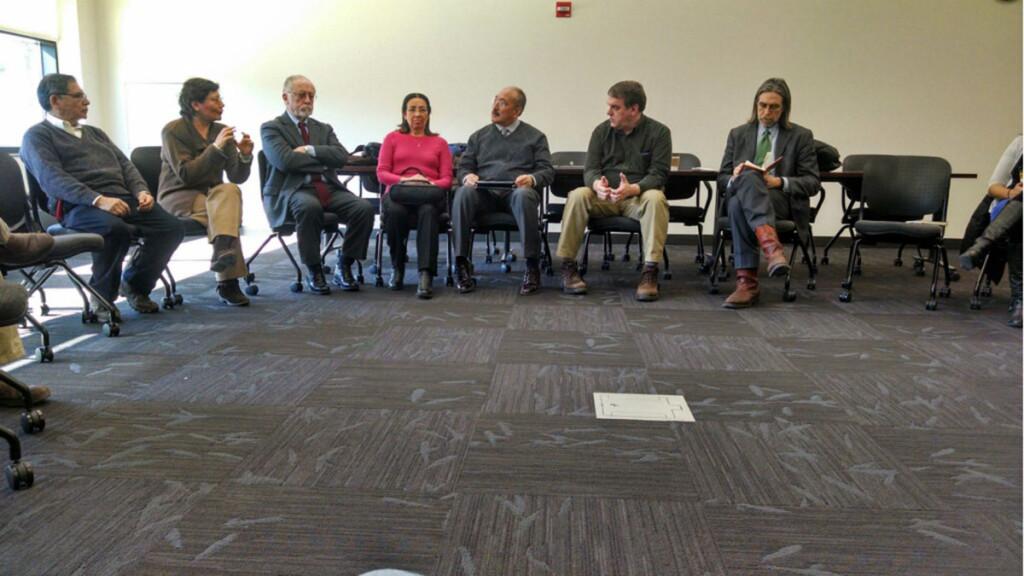 Four faculty from Pontificia Universidad Católica del Perú sat down with several UW-Eau Claire faculty members in a panel-type discussion Tuesday to discuss a potential partnership between the two universities.

The conversation, called “Perspectives from the South: What Northern Partners Need to Know,” took place in the Menomonie Room of the Davies Center and was centered around learning from one another’s perspectives.

PUCP is an educational institution in Peru trying to immerse education equity among different socioeconomic classes since the country has a difficult time giving equal learning opportunities.

“We think, and we benefit, from privilege in America,” Paul Kaldjian, chair of the geography and anthropology department, said.

The four panelists, who were interpreted by Eau Claire professor Eric Torres, included people from the geography, anthropology, education and fine arts departments from PUCP. They all said the equity was most separated between developed urban areas and developing rural areas.

Torres, who teaches classes in anthropology and specializes in Latin American education immersion efforts on campus, said there is a misconception that people who dwell in the rural areas of Peru can’t participate in basic classroom operations.

He said these youth are expressive and just need an avenue to a quality education.

“That will help gain a wider global perspective,” he said.

But almost 90 percent of U.S. citizens attend secondary school while only about 80 percent do in Peru, making a noticeable bridge between the two countries.

The ultimate hope for the university is to form a partnership with PUCP so education, anthropology, geography and music students can give these people from undeveloped areas that opportunity.

As the title of the panel entailed, the purpose of Tuesday’s get-together was for the four faculty members of PUCP to share what is different in Peru and for Eau Claire attendees to hear about the different perspective first hand.

Carmen Manning of the education and sciences department said Eau Claire students and staff on the immersion would gain the benefit of learning how to teach to other cultures.

“One piece that’s really exciting to me … is asking to look at the world of education through a variety of lenses,” she said. “I see so many opportunities to learn that perspective.”

She also said the two schools could connect through technology, which has been a push at Eau Claire as Centennial Hall is home to several active learning classrooms.

The visitors from Peru embraced the idea in unison.