Students learn about Chinese culture through festivities in classes 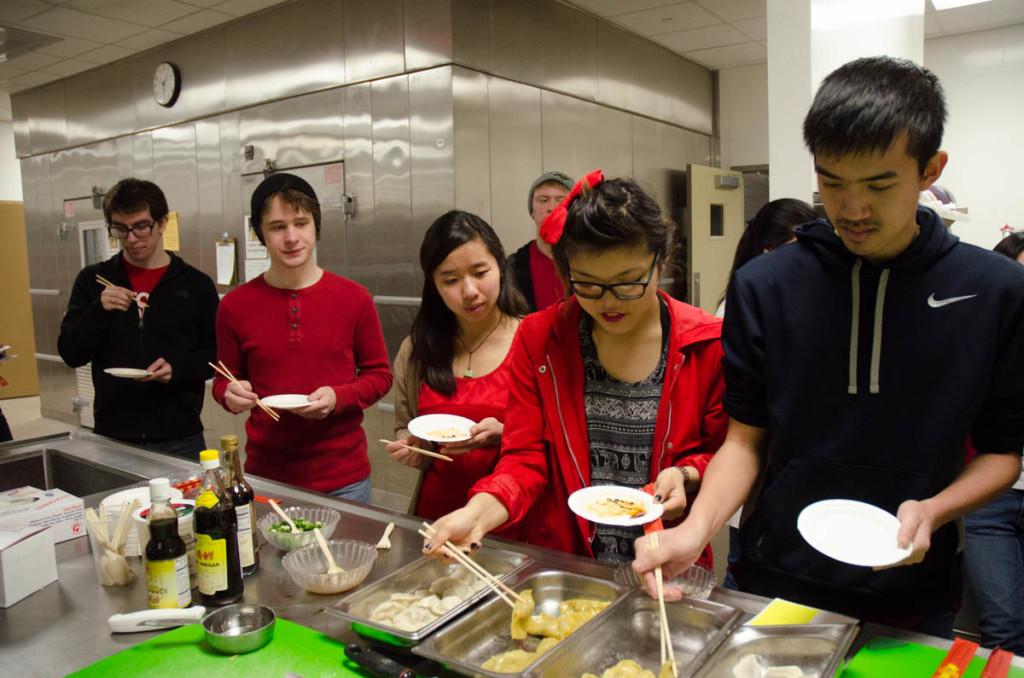 With the making of dumplings, traditional songs and dances and a lot of the color red, students in professor Kaishan Kong’s Chinese language and foreign culture classes got a first-hand experience celebrating the new year.

While it may be February, the Chinese New Year runs on the lunar calendar, making it a different time of year each year, Kong said. This year, the 15-day celebration began Feb. 19.

“It’s important because it is a global world,” Kong said. “We want students to learn not only what’s in the textbook, but what is happening in the culture.”

She had her students make New Year wishes in her classes the day before the New Year officially began. These are traditionally ways to wish themselves or family and friends’ good health and happy thoughts.

Kong said she taught them traditional phrases in Chinese and had students write them on red paper, the color which represents good luck in Chinese culture.

“There are many things we do during Chinese New Year and I wanted to give them opportunities to celebrate,” she said.

Davies Center, with the help of Christian Wise, regional district manager for Blugold dining, and funding from the language department.

While her larger class could only watch the demonstration, the two smaller ones were able to participate in making the dumplings. Kong said she thought this was an invaluable experience for students to get to know the culture.

“(Chinese New Year) is not just about producing food, but it is about togetherness,” Kong said. “We want to prepare our students to be global citizens.”

Victoria Dylla, freshman English education major, is currently in Kong’s Chinese language class because she has a strong love for the language and culture, and she hopes to someday teach English in China.

Dylla said Kong provided many opportunities, or “culture days,” for her students, giving them a chance to take a break from the fast-paced learning environment in the classroom and experience the culture first-hand.

“Sometimes you don’t really think about it, like someone is actually doing this somewhere, until you are experiencing it with her,” she said. “What I really like about her teaching style is she tries to have you have an experience during the class rather than telling you about it.”

Outside the classroom, Dylla celebrated by blasting music in her dorm room on Chinese New Year’s Eve with several of her friends and hall mates because she learned in class that blasting loud music the night before is another tradition.

Carter Smith, chair of the language department, helped get funding for Kong to make dumplings in Davies Center. He said he was impressed with Kong’s dedication to the event and happy to have her on staff.

“We’re really pleased that we were able to hire Dr. Kong last year,” he said. “We’ve never had a dedicated faculty line to the study of Mandarin Chinese, she speaks Cantonese herself, and then all the cultures of China.”

Smith said the department tries to give many opportunities, here and abroad, for students to participate in intercultural experiences and this was an easy way to do that right here on campus.

“If we can do something as simple as bringing the Chinese New Year and the culture of food, and how food is connected to history, people and language… and get students hands-on experience, that’s fantastic and it makes sense to me,” Smith said.