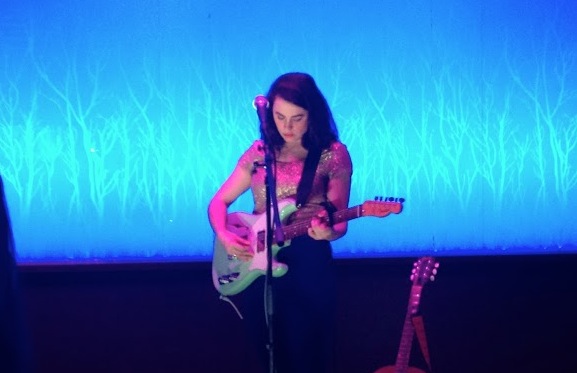 A veteran of The Cabin, Krueger has been a featured artist once before, but has found exciting changes at UW-Eau Claire since her last trip home.

“Your new student center is impressive,” she said. “You should all be proud to call such a beautiful campus your home.”

Following her graduation from North High School in Eau Claire, Krueger studied secondary English education at the University of Minnesota-Duluth. Between long term substitute teaching spurts, Krueger has been cultivating her music career in Duluth’s art and music scene for the last ten years.

“I taught middle school language arts for a year, but it was too much coming home from gigs at 3 a.m., then having to head to school the next morning,” Krueger said.

“Lustrous,” Krueger’s sophomore album, was released in December through Chaperone Records. She and her musical team spent three years crafting the record.

While in town, Krueger said it was a joy to be back, and loved spending time with her family and stopping into Racy D’lene’s Coffee Lounge.

The Cabin was filled with people from Krueger’s Eau Claire upbringing. Her father and other family members sat at a table near the back, beaming as Krueger sang her heart out. In addition to her family, Krueger’s sixth grade language arts teacher sat in the audience.

“It’s so funny seeing her here because my teaching has always been inspired by her,” she said. “We both treat teaching like being on stage — each day is a performance.”

A performance mixed with her own songs from her first and second albums “Dancing with Phantoms” and “Lustrous,” as well as covers, it was a night of nostalgia for Krueger. A musical storyteller, Krueger played a Fleetwood Mac cover, explaining that a VH1 documentary about Stevie Nicks, “a truly witchy woman,” made her want to become a singer.

She honored her Wisconsinite roots by playing several covers of artists to be featured at this summer’s Eaux Claires Festival, and played a Bob Dylan cover as an “adopted Minnesotan gal.”

“I loved getting the chance to do some covers I haven’t done in years,” she said.

Krueger, who normally performs with her band, played the two hour set on her own, accompanying herself with one of her two guitars for every song, and only taking one ten minute break.

“It was weird performing without my band. I make the sacrifice and drive to the cities a lot, since that’s where my band is,” Krueger said. “But it’s worth it. I’ll be with them at my show in Minneapolis tomorrow

Although she missed her band, Krueger and workers at The Cabin felt her entire band would be too overwhelming for such an intimate space. Before singing the title song of her new album, she explained her band’s importance in this particular song.

“My band really carries this song. But since they’re not here, I’ll just have to carry it with my voice,” Krueger said with a sweet smile.

And that she did.