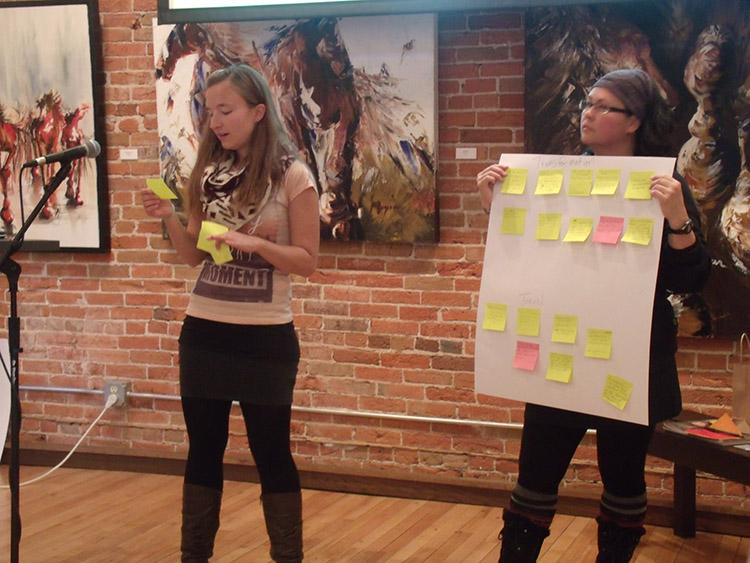 Jenny Rieger, left, presents for the audience at the Volume One Local Store Gallery. - Photo by Sam Martinez

At a workshop Saturday at the Volume One Gallery, Jenny Rieger dealt out travel tips and playing cards to participants for an exercise called the traveler’s game.

The traveler’s game is a simple trick-taking card game similar to Bridge; however the trouble was each group learned slightly different rules. When the groups mixed, everyone was playing a slightly different game together in complete silence.

Rieger said the participants’ confusion in the game is not unlike the confusion of being in a foreign country.

“You give up some of your rules to make (travel) work,” Rieger said.

Jenny Rieger, a 27-year-old who has been to 24 different countries, is originally from Germany, but speaks English, German and some Dutch.

The workshop, “Synnection: How Travel Transforms Us,” included an interactive presentation where Rieger asked audience members to share their traveling experiences.

Rieger said she prefers to travel modestly not only because it is cheaper, but because it forces the traveler to step even further out of their comfort zone.

“If you want to make your travels transformative, put yourself in a crisis,” Rieger said.

Sandra Herbenson of Train TLC Coaching, a group that encourages people to share valuable life experience with the community by creating a “Playshop,” co-hosted the workshop.

During the event, the audience of around a dozen community members shared stories about how travel has transformed them, whether it was a wine tour in France or just a trip to the farmers market for the first time.

Brandon Nelson, an audience member, said the talk helped him think about his own travels more.

“For me it was the courage aspect that interested me,” Nelson said. “I’m more of a safety person when it comes to traveling.”

Rieger also talked about how, over the years, travel has made her more of a minimalist. She said she has learned to think deeper about what value any given object has.

“I have shifted from buying stuff to buying experiences,” Rieger said.