International travel writer speaks about living in the Midwest 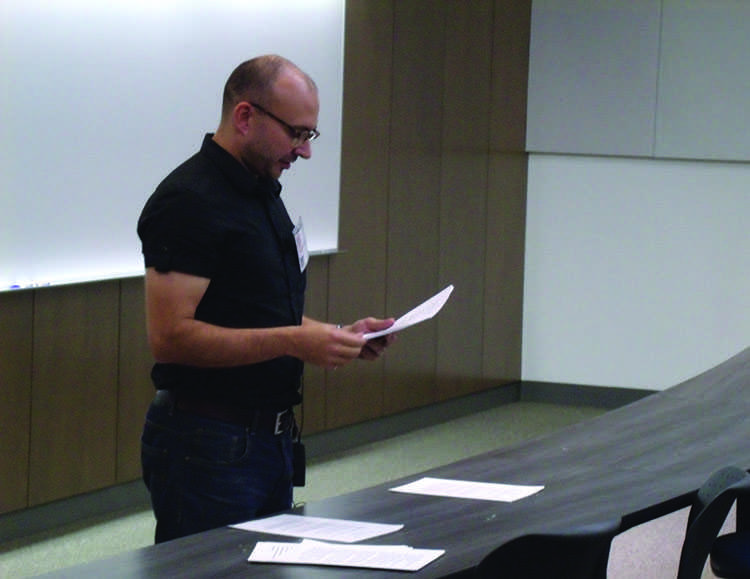 Travel writer Frank Bures reads one of his stories to the audiences after his talk in Centennial.

“There’s a feeling I get when I look to the west.”

Robert Plant sang this line in the Led Zeppelin song “Stairway to Heaven.”

As a boy growing up in the Midwest, Frank Bures would listen to these lyrics and dream of what he could accomplish if he ever escaped the Midwest.

“I would hear that line and literally look west,” Bures said.

Bures grew up in Winona, Minn. and attended college at St. Olaf College (Minn.). He writes about his experiences traveling all over the globe and has been published in several different publications. He has won numerous awards for his work. He currently resides in Minneapolis; however, he said as a younger man he fell victim to what he describes as “The Gatsby narrative”.

“The Gatsby narrative,” as Bures explained, is the belief that the Midwest is a place where dreams die. He said in his youth he bought into this belief, and as a young writer he often felt surrounded by it.

“At a gut level I didn’t really believe it,” Bures said. “Even though everyone around me seemed to.”

The talk on Tuesday in Centennial Hall titled “Does the Midwest Matter: Thoughts on the Geography of Greatness, Travel and Home” was part of the Chippewa Valley Book Festival and the Department of Geography and Anthropology and the UW-Eau Claire Council on Internationalization and Global Engagement sponsored the event.

Geography and Anthropology Department Chair Paul Kaldjian said they were excited to have a travel writer speaking at the university. Bures also spoke to an interdisciplinary geography and writing course on Wednesday.

Brenda Brant, alumna, said she was able to relate to the feelings Bures expressed about wanting to leave the Midwest.

“I wasn’t one that went anywhere,” Brant said. “But I wanted to.”

Bures started to warm up to his Midwestern roots when he returned to Winona after a trip in Africa. He got a job writing for the Winona Daily News doing mostly obituaries. The newspaper eventually gave him the chance to work on a special heritage section, a job that required him to go through the city’s historical archives.

He said many of the things he learned fascinated him, especially the knowledge that famous architects designed many of the city’s buildings.

“It was hard to believe that there was a time when people living there had these grand schemes,” Bures said.

After delivering his speech, the audience of around 30 people, mostly community members, waited for Bures to read them some of his stories.

He shared stories about his experiences talking with plant psychics, vacationing without grandma and covering cases of imagined genital theft in Africa.

Audience member Denny Shea said the whole talk started to finally hit home with him when Bures read his story about vacationing for the first time without grandma.

“It started making sense to me once he started telling stories about where he came from as a man who originally wanted to escape from everything,” Shea said.

Bures said humans are a species that learn to live based on the stories they’ve heard, and they buy into the “Gatsby narrative”  because they don’t often hear about famous and successful people around them. However, he also said everybody possesses the power to shake it.

“The beauty of human beings in the end is that we don’t have to believe all the stories we hear,” Bures said. “We can create our own.”