Forst impresses at The Cabin

Singer/songwriter has themes of love and heartbreak 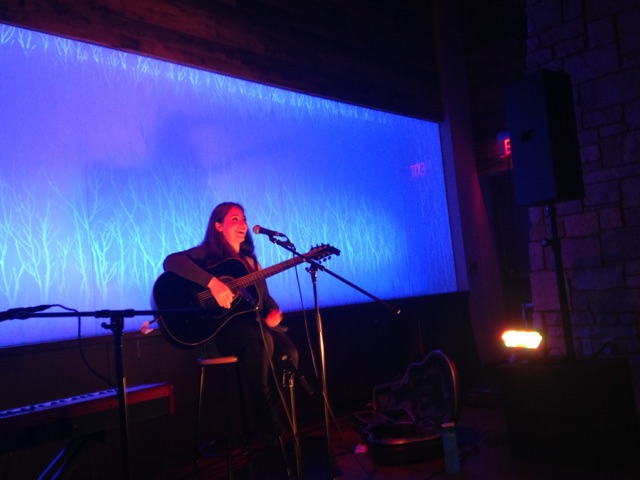 This weekend the Cabin hosted singer/songwriter Emily Forst. She came equipped with not just her voice, but also a keyboard and guitar. The acoustic design of The Cabin reinforced the ambient music. Forst said the cabin was a great place to preform.

“It is a nice sounding room, because you have a lot of wood and stone, natural materials that sound great for acoustic music,” Forst said.

The cabin was moderately full Friday, filled with about 20 listeners. The music included an in-tune melodic voice of Forst singing about broken hearts, love and some covers.

“I had one major relationship when I was in New York City, and when that broke up, I thought I had lost myself,” Forst said. “I spent so many years with someone else I did not know who I was anymore,and so I wrote songs to try and figure out what happened and how things went wrong, what went right and who I am outside of a relationship.”

Another influence behind Forst’s music is the encouragement of her father. She said the story behind the song “Everywhere Is Home” was when her father came to New York to prevent her from giving up on her dream.

“It was when I was going to quit music and he took the next flight to New York City and said that you need to keep living your dream and while he was on that airplane I wrote him that song,” Forst said.

Angela Koch, a student at UW-Eau Claire, thought the performance was very good and thought acoustic sounds are always nice for The Cabin since it is set up to accomodate it.

Koch agreed with Forst that The Cabins design provided good acoustics and said that it helps that she has a beautiful voice. Koch really appreciated the performance.

“I appreciated the cover songs; I also thought the titles of her songs where really funny,” Koch said. “It was playful but there was some serious songs that were about love and break-ups I think it is very relatable for a lot of different types of people and she connected with her audience well.”