Drowning in the truth

UW-Eau Claire professor searches for more than victims in his latest book, blurs line between fact and fiction 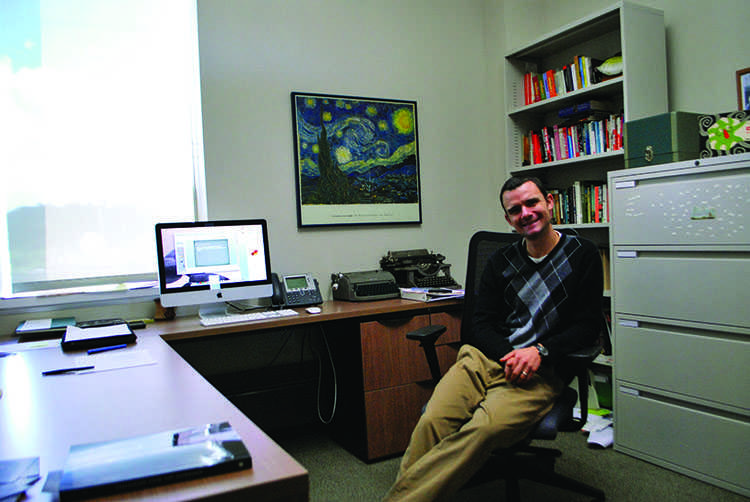 After watching police search for the body of one of the many drowning victims while on a morning run in the summer of 2011, thoughts about how rivers are something to fear turned into thoughts about the meaning of truth for a UW-Eau Claire professor..

The next summer, BJ Hollars, an assistant professor in the English department, used these thoughts to begin working on his new book “Dispatches from the Drownings: Reporting the Fiction of Nonfiction”, which was published this month.

To write this book, Hollars said he took 75 historical accounts of drowning that occurred in this region and rewrote them, while at the same time completely fabricating 25 stories about drowning and leaving it up to readers to decide which ones were real or not.

“In many ways that’s sort of a commentary on the limits of truth and the limits of reporting,” he said. “Even when we try to relay a fact the best we can, sometimes only 75 percent of that fact is actually true and a portion of it, 25 percent, might actually be a bit false.”

For these reasons, he said he considers this work to be a “hybrid text”. While it’s not completely fabricated, it’s not all completely true either.

Hollars said while researching he was struck by the conclusions reporters jumped to, such as the victim’s state of mind, and how quickly they jumped to a conclusion made him question the truthfulness of the reports.

“Everything is a series of choices,” he said. “What we include in a news report, what we leave out, will help kind of cement a story one way or the other forever.”

In addition to this inclusion (or deletion) of facts, Hollars said he paired many of the stories with photographs by Charles Van Schaick, a photographer from the Black River Falls area in the late 1800s.

“Late at night, when I was reading these news reports, I would turn to the pictures and suddenly there would be a picture that seemed to fit the victim described in the news report,” he said. “After kind of going through it long enough there were so many fits, which was kind of strange.”

A lot of his inspiration came from “Wisconsin Death Trip,” a book by Michael Lesy that uses news reports and photographs by Van Schaick to paint a picture of Black River Falls in that time period, he said. “Dispatches from the Drownings” uses different photographs and focuses strictly on drowning reports, but the idea is very similar.

Greg Kocken, university archivist, said he worked with Hollars to help identify several of the photographs used in the book.

“I’d like to think I played some small role, but truthfully this really all comes from BJ’s rather creative mind,” he said.

Kocken said he will be helping McIntyre Library host an author reading for Hollars’ new book on Oct. 2 in the second floor breezeway, but that it will be slightly different from readings they have done in the past because they are presenting the audience with the chance to guess whether the story read is true.

“While I would certainly like (Hollars) to divulge the truth, I don’t think he’s going to do that,” he said. “Nonetheless I think it’s going to be very interesting to be able to see how the audience reacts whether he is telling them fact or fiction.”

Despite this, Hollars said he wants to remind his readers that the “game” of figuring out fact versus fiction is not his intention, nor is it to call out specific drowning victims.

“I am trying to draw attention to a threat that continues to plague our community,” he said. “In addition, I hope to remind readers of a very different threat: taking everything we read at face value.”