Springfest kicks off next week 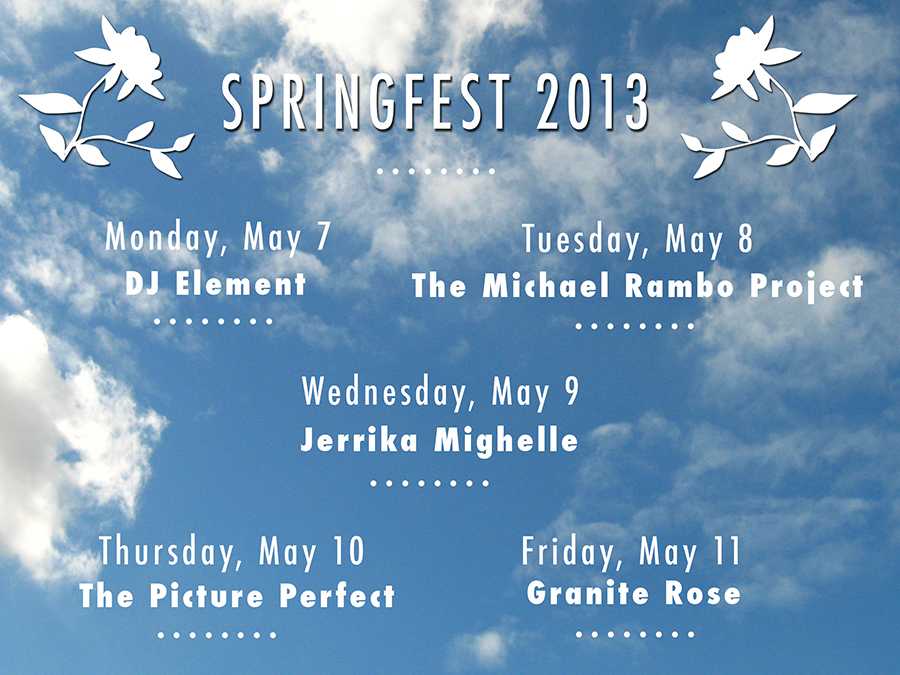 Now that the beginnings of spring are finally here, it’s safe to say finals week isn’t too far around the corner either.

For those students who are stressing and rushing to prepare, UW-Eau Claire has planned something to, at least momentarily, ease their pain. Springfest will be held on the second floor terrace of the Davies Center from May 6 through May 10.

Springfest is a compilation of various performers showcasing original songs and covers between noon and one each day of the week. There will also be a number of different university-planned activities that students can become involved with as well.

While University Affairs Comittee festivals co-chair Lisa Berfeldt said the event hasn’t been finalized in terms of what sort of activities will be present, prizes such as gift cards to local restaurants and businesses such as El Patio and Gordy’s can be expected.

“Springfest is really just for those who are looking for a break in-between studying and class,” Berfeldt said. “Our goal is to create an environment where students can relax and have fun before finals.”

In terms of genre, students can expect a variety of local talent ranging from rock to jazz to lower key music as well. Berfeldt said Springfest is  usually a good way for bands to familiarize the community with all of their different kinds of music.

“I think it’s fun for these bands to get out in front of the entire campus,” Berfeldt said. “A big part of why they perform is to get their name out … a lot of this is a way for bands to publicize themselves.”

The co-chair said performers aren’t recruited by the UAC exactly, but rather hear about the opportunity through word of mouth or fliers and then approach the organization. Granite Rose frontman Nick Anderson was one of the people who heard about the concert this way.

Coming into the band’s second year performing at Springfest, Anderson said he’s excited to see what this year has in store given the dramatic change in venue. Prior to this year, the event had always been right next to the clock tower near the center of the campus mall. But due to construction last year and over the summer, the venue has been changed accordingly.

“After being booked in so many bars in the Eau Claire and Wausau area, playing outside is what I’m most excited for at this event,” Anderson said. “Not to mention being a sophomore, it’s always nice to play for kids your own age.”

As for the band itself, Anderson said there’s been quite the change as well. He said that with another year under their belt and the introduction of a new bandmate, Granite Rose is ready to perform. They will be playing variety of rock covers to the tune of groups like the Foo Fighters as well as incorporating a collection of their own original material into the set list.

“As far as our band goes, we picked up a new drummer and we’re another year more experienced,” Anderson said.

As for those looking to just enjoy the music, freshman Anna Smith said she is very excited for Springfest. She said since the bands are playing outside along with the weather feeling a bit warmer, the event timing seems perfect.

“Generally everyone enjoys music and being outdoors so it’s a nice touch before finals begin.”