“How I Learned to Drive” deals with tough issues, mature themes 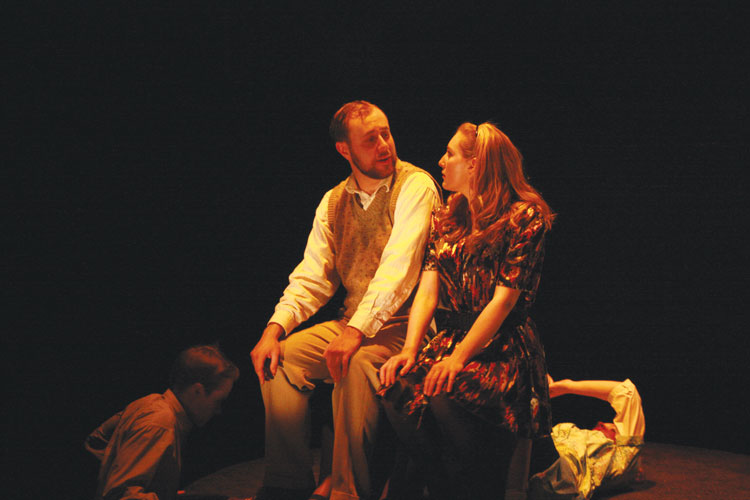 “How I Learned to Drive” is not a happy, feel-good play, said Stage Manager Brianna Mueller, but it is an important play.

“This show was chosen because it’s so hard to describe what it makes you feel,”  said Mueller. “It’s about real people who are in situations that we don’t usually let light fall upon.”

“How I Learned to Drive,” written by Paula Vogel and directed by Pete Rydberg, visiting lecturer in theatre arts, deals with issues of pedophilia, misogyny, familial abuse and sexuality and is for mature audiences only.

“Theatre is supposed to be a mirror of real-life experiences and real life is not always pretty, it’s not always a fairytale,” said senior Abbey Lowenstein, who plays Lil Bit, the main character. “Theatre is supposed to challenge you, and ask the really tough questions, and show you things you might be uncomfortable with. I think it’s an important experience for people to have so that they can grow.”

Lowenstein said her biggest challenge in doing this play was identifying with her character.

“You have to find some sort of connection with your character, even if your character has gone through things that I myself could never have imagined going through and surviving,” Lowenstein said. “There has to be a place where you and your character meet, especially in these shows that have a tougher plotline. “

Aside from playing intense characters, the cast must face the challenge of performing on a revolving stage. The revolving stage was built in the middle of Riverside Theater, where the play will be shown, and extra seats were put up so that the stage is visible from every angle.

Mueller, a senior, said performing on a stage in the middle of a room, called theatre in the round, is very different from what most actors are used to.

But it adds to the show, she said.

“Since ‘How I Learned to Drive’ is a show about things that make society uncomfortable, seeing what is happening from all angles really makes audience members reflect on what they’re feeling,” Mueller said. “You can’t look away, literally. That’s what’s so good about being in the round for this show, there’s no escaping this show, in a lot of ways.”

Senior Michael Renner, who plays Uncle Peck, said another challenge to the play is its structure.

“It’s a memory play,” Renner said, “It doesn’t necessarily happen linearly … it winds up taking you forward or back a couple of years. This play accurately represents just how the thought process goes.”

Mueller said she hopes students attend this show, as it will challenge them.

“You’re not going to be able to sit in this show and just be entertained; it’s not that kind of theatre,” Mueller said. “It’s not a show that you’re just going to sit through and not feel something. I hope audiences are moved by it.”

Renner said that even though the play contains dark material, its underlying message is one of empathy and forgiveness.

“(The play) doesn’t make excuses for anyone’s behavior, but it doesn’t judge them,” Renner said, “And I feel that’s an incredibly important part of this play.”