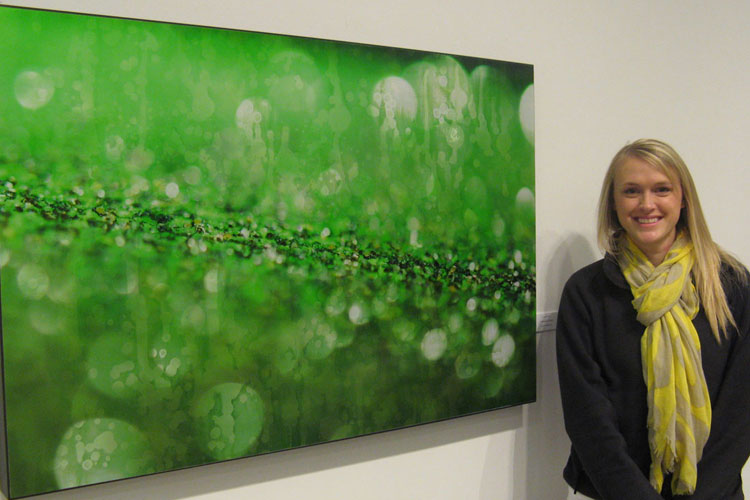 For senior art student Alyssa Trainor, artwork is a part of her everyday life. She said she takes her work very seriously and is proud and honored to be included in the Bachelor of Fine Arts Candidates’ Senior show at the Foster Art Gallery.

“Photography is the only thing you have complete control over … I feel like I have lost control of my life and I am just kind of trying to work through that process,” Trainor said.

Trainor is one of six seniors who will show their work at the exhibit, which opened April 28 and will run through May 13.

Trainor’s medium is macro photography, which she describes as zooming in extremely close to a small aspect of an object.

Trainor said she takes her original image, sprays bleach on it and then goes back with a white paint marker and draws circles around the bleach stains to “heal the original image and create something new.”

She said she then overlays the original, non-edited photo on top of the beached one to create a type of “makeup” to cover up what has been done to the edited version.

“I am attacking myself everyday and then trying to heal it … it’s like this process of healing and renewing and in the end being able to be confident,” Trainor said.

Trainor said she wants the images to create their own reality and for people to see different things in the pictures.

Another senior with art on display is Glenn Terpstra, who chose to create a cluster of artwork all from the camera on his phone.

Terpstra said he is influenced by music, and his photographs take on the form of album covers. Working with the Myers Briggs scale, which is used to define personalities, he said he associates music with each of the personality types of a person.

He said his work isn’t fancy, and he wants to show that anyone can do it.

“It is filtering information, filtering people, filtering everything to produce something that’s so organized, and I think that’s what we as humans try to do,” Terpstra said. “We try to make things fit and look right.”