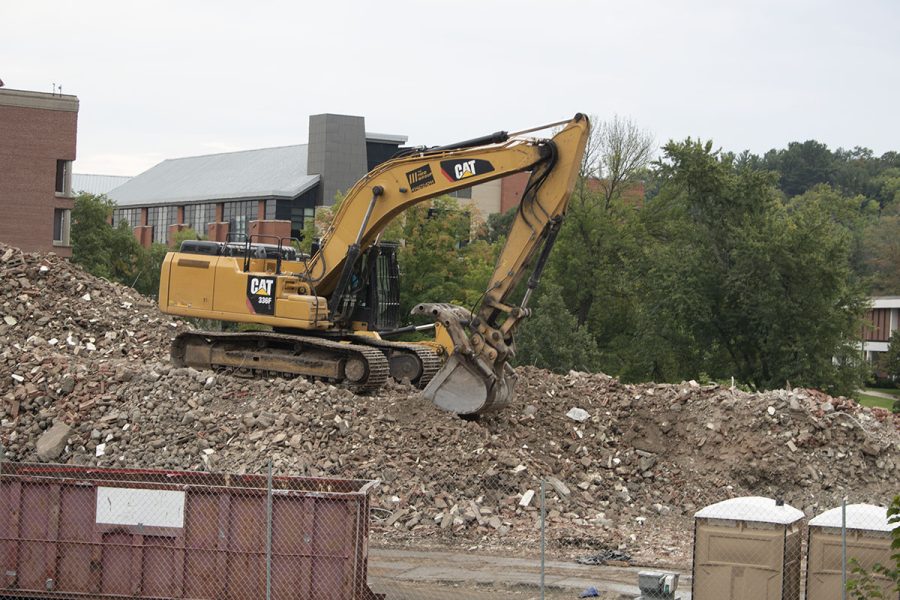 Demolition of Putnam and Katherine Thomas Residence Halls is underway as the first step of a four-year long construction project begins on lower campus.

The space of the two dorms is the future site of the new Science and Health Sciences building which is set to replace Phillips Hall.

The site is currently closed off by a fence while construction crews work on the two dorms.

“It is illegal to enter the fence. It is trespassing,” Crickette said. “The project can be viewed from a safe distance or streamed online on a webcam.”

Crickette said the new Science and Health Sciences building will allow the university to offer a wider range of degrees.

But with the demolition of the only lower campus dorms, some have raised concerns about accessible housing for students with disabilities and where they will be left when the debris is cleared.

Ashlie Fanetti, a 2021 UW-Eau Claire alumni, has been outspoken against demolishing the dorms since the project was announced, including speaking with The Spectator last spring.

Now that the project is underway, Fanetti said the loss of accessible housing is being lost in the excitement of the new science building.

As a person with cerebral palsy, Fanetti said she lived in a wheelchair-accessible dorm in Katherine Thomas Hall.

“When I was living there I was comfortable,” Fanetti said. “There are always some accessibility issues but they were very accommodating and I was very happy with my situation.”

Fanetti said it is frustrating to watch her old dorm torn down without a plan to replace it.

“What is their plan to provide accessible housing?” she said.”Right now, as far as I know, there isn’t one.”

Crickette said the university does not plan on building additional dorm buildings because university housing currently meets the needed capacity.

“We have enough housing space to accommodate students who choose to live in campus housing,” Crickette said.

Crickette also said the university has accessible dorm rooms in all of the upper campus residence halls and they provide transportation up and down the hill for students with disabilities.

“We do provide accessible housing to students in our upper campus dorms and we have always provided transportation,” Crickette said. “We’re just not going to have any residence halls on lower campus.”

Crickette said information about accessible housing can be found at the Services for Students with Disabilities website or office in Centennial Hall.