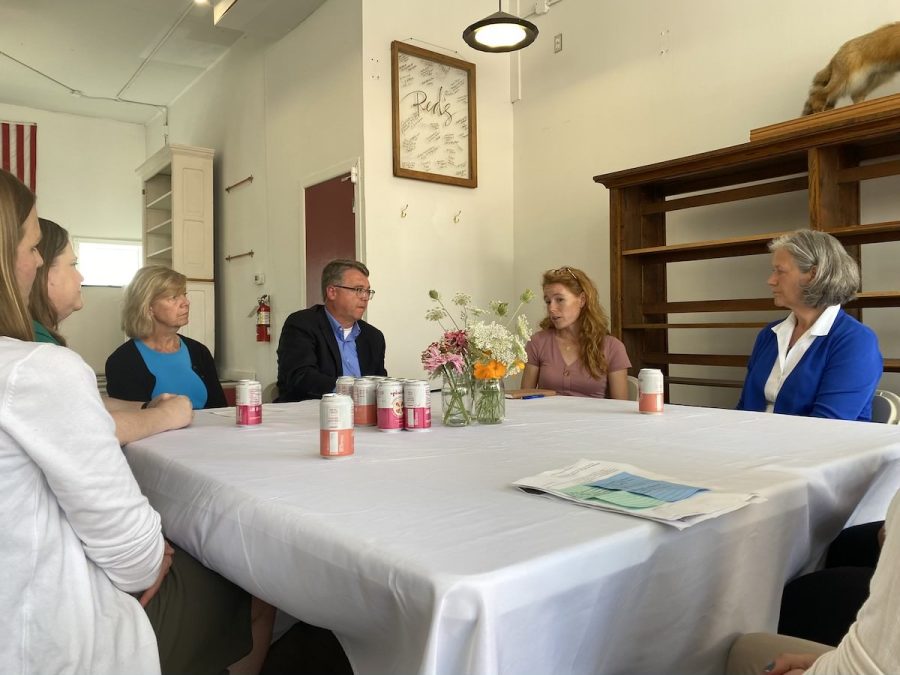 According to National Public Radio, this decision has put older abortion laws back into effect across the country. In the state of Wisconsin, this means a law made in 1849 now makes abortion a Class H felony, according to the Wisconsin State Legislature website.

The roundtable began at 4 p.m. and was hosted in Red’s Mercantile, a store located on 224 N Dewey St, Eau Claire, Wisconsin.

Its owner, Rebecca Cooke, said she offered the location for the roundtable.

Cooke ran against Pfaff and two other democrats to represent Wisconsin’s Third Congressional District in the U.S. House of Representatives before losing in the Democratic Primary earlier this month, according to Ballotpedia.

Pfaff began the roundtable with an opening statement followed by Baldwin. Both said how important they believe the issue of reproductive rights is in the upcoming election for the U.S. House of Representatives.

“It’s one of the most personal and fundamental issues on the ballot,” Pfaff said.

After opening remarks, Eau Claire resident, Melissa Janssen shared her personal story of how the overturning of Roe v. Wade has affected her.

On the day of the Supreme Court decision, Janssen said she noticed complications with her pregnancy. These complications, which developed into signs of infection and her water breaking at just 18 weeks, lead to a difficult decision.

Janssen said because of the ruling, the care she needed was no longer available in the state of Wisconsin and would need to be administered out of state.

While she says she was eventually able to get care, she noted the frantic and emotional process she and her doctor went through to find care and how not everyone in the country would be able to do so.

Members of the roundtable took a moment to thank Janssen for her bravery in sharing her story.

Cheryl Thiede, who works with the Options Fund, also attended the roundtable. According to its website, the Options Fund is a volunteer organization that works out of the Chippewa valley to aide women in areas of the state where there are no abortion providers.

Thiede noted a concern for lack of awareness and an increase in the cost of reproductive services. She also mentioned how before legality was not the issue but now that has also become an obstacle.

“(Abortion) is now illegal and out of reach,” Thiede said.

Cooke was a participant in the roundtable as well and shared her thoughts on reproductive rights.

“When it comes to reproductive health, abortion is healthcare,” she said.

At the end of the roundtable, Pfaff briefly shared his thoughts on his U.S. House of Representatives election opponent, Derrick Van Orden, and his beliefs on reproductive rights.

“He has compared Planned Parenthood to genocide and he’s just wrong,” Pfaff said. “wrong and out of touch.”

After the roundtable, Pfaff shared why he felt it was so important to host the event.

“As a result (of the supreme court decision) half our nation’s population doesn’t have the rights they had two months ago and I think that’s unfortunate,” he said. “I think it’s important that we listen to people and their individual stories.”