Blugolds have rare opportunity to present research to Congress members 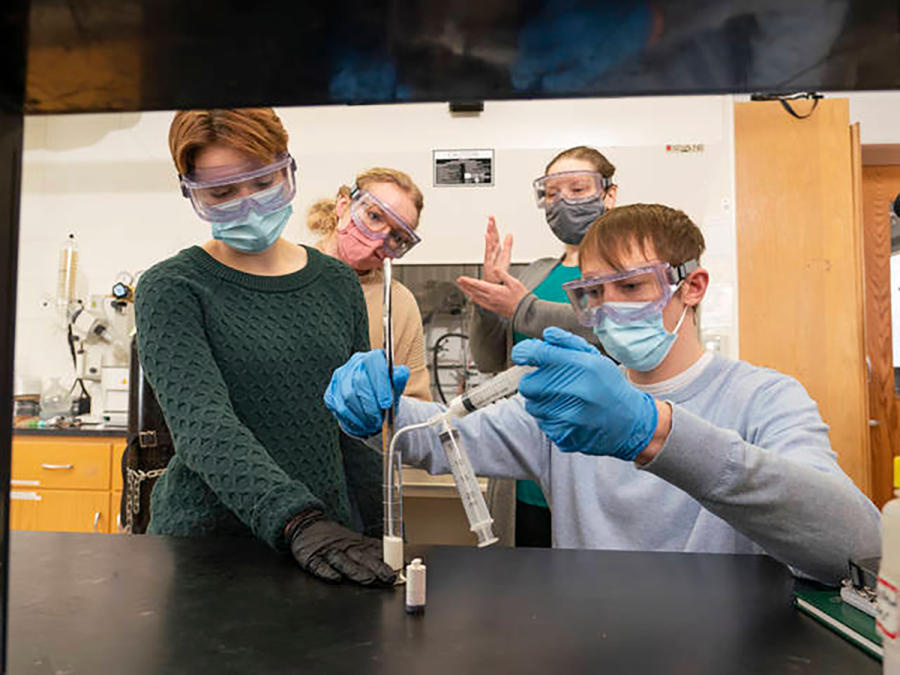 A group of UW-Eau Claire students will be presenting their research at Posters on the Hill, according to research mentor and materials science and biomedical engineering Professor Elizabeth Glogowski.

Posters on the Hill is an opportunity for students and research mentors to have their work seen by members of Congress and advocate for undergraduate research, as stated by the Council on Undergraduate Research (CUR).

“The students are inviting their Senators and US Representatives, and staffers, to come learn about their research project and the importance of undergraduate research in general,” Glogowski said.

Posters on the Hill will be held virtually on April 26 and 27, according to the CUR. Glogowski said the event is usually held in-person on Capitol Hill.

Glogowski said hundreds of abstracts were submitted, but only 60 were accepted to present.

“Presenting at Posters on the Hill is a rare opportunity and we are honored to have been selected,” Glogowski said.

The research team consists of students Kira Haus, Marshall Apps, Grace Cunningham and Drew Smith and research mentors Jeremy McBride and herself, according to Glogowski.

“The students tested the materials and designed the testing setup, optimized the foam production and analyzed the data they collected,” Glogowski said.

The foams being tested are designed to stay in place for 60 minutes and then dissipate, as stated by Glogowski.

Glogowski said her expertise is in polymer science and engineering, and her other research projects have focused on synthesizing new polymers.

For this research project, the team focused on the application of already existing, Food and Drug Administration-approved polymers for the biocompatible foam, according to Glogowski.

McBride works as an interventional radiologist, according to Mayo Clinic Health System. Glogowski said the students and research project have benefited from McBride’s radiology expertise.

Glogowski said this project would be impossible without undergraduate research, and the students also gained valuable skills in the process.

“They’ve gotten hands-on experience in the lab and been able to interact with Dr. McBride to see the direct application of their project to improve patient outcomes,” Glogowski said.

Apps said he got involved in undergraduate research because he hopes to go to medical school and his experience working in a college laboratory helped him see the impact research has on the medical field.

“It has been really great academically to gain laboratory skills as well as understanding of the research process as a whole and what all really goes into it,” Apps said.

Cunningham, a first-year chemistry and biochemistry student, said she developed an interest in research during high school, and the Blugold Biomedical Innovator Program gave her an opportunity to explore that interest.

According to Glogowski, all of the students in the research team are part of the Blugold Biomedical Innovator Program.

The program is a collaboration between UW-Eau Claire and the Mayo Clinic Health System aimed at giving undergraduate research opportunities to students pursuing healthcare or the biomedical field, according to Blugold Central.

Smith, a first-year biomedical engineering student, said she wants to be a physician, and as a Blugold Biomedical Innovator scholar, she has been able to get involved in research early in her career.

According to Apps, the team had not presented at Posters on the Hill before, but they previously presented at other CUR and Celebration of Excellence in Research and Creative Activity events.

Glogowski said the team is excited to present their research at Posters on the Hill.

More information about Posters on the Hill can be found on the CUR website.

Kasper can be reached at [email protected]