Associate director in the Office of Multicultural Affairs retires. 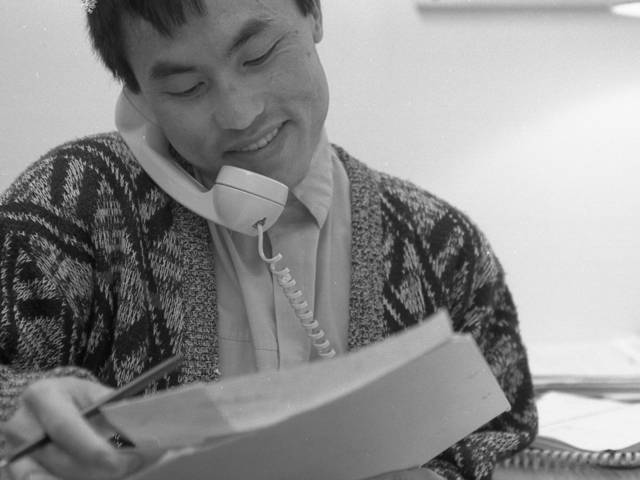 In 1984, Charles Vue was one of only four Hmong students enrolled at UW-Eau Claire. This experience led to a longtime commitment to advocacy, particularly of Hmong students. Vue said he used his own experience as a guide in implementing initiatives to ensure Southeast Asian students thrive on campus and feel a part of the community.

Vue said as a refugee coming to the United States, Vue did not speak English. He said he had no prior education, none of his family spoke English or had former education. Their only form of income was from the monthly stipend their church gave to pay for essentials.

Vue said how this struggle pushed him to want a higher education. He decided to send an application to UW-Eau Claire. He said it seemed like the best and only option at the time since it was close to his home and didn’t know where else to apply.

“When others did not see me, or have the confidence in me, it was me who would tell myself I can,” Vue said.

To meet the standards of admission he had to attend a precollege for two months. Vue said alongside him were other disadvantaged minorities and white low-income or first-generation students. After he completed and passed precollege, he was accepted into UW-Eau Claire.

Vue said he graduated despite the disadvantage he had as a first-generation refugee student. He was the first Hmong student to graduate from UW-Eau Claire, in turn breaking the glass ceiling for Southeast Asians, he said.

Vue said he wanted to help others like himself achieve success in their education by providing a helping hand and being the mentor he never had.

Eventually, Vue said he made his way back to UW-Eau Claire after nearly a decade of social work, where he said he accepted a job as a Southeast Asian student services coordinator in 1998 for the university.

There, he served as a resource for students dealing with personal, financial and interpersonal issues. He said he wanted an environment where students feel safe and can be open about struggles or issues.

“His legacy, even if he doesn’t work here, will continue through his former students now employed at the university.”

Diaz said Vue is forever embedded in UW-Eau Claire’s history; that he left a significant impact on those around him and unknowingly taught her what it meant to be in multicultural affairs.

Diaz said Vue has impacted the students and staff around. Students like, Dang Yang, former director of the Office for Multicultural Affairs at UW-Eau Claire, who was mentored and coached by Vue.

Navigating the complexities of higher education is not common sense. According to an article written by Denise Olson, Vue said he served as a bridge between identity and education, advocating for students of color while directing them to a path of success.

“That shared understanding was important, connecting with someone who looked like me, who had a cultural background very similar to my own, helped my transition into higher education,” Dang said.

Vue said he learned early on in his academic career that he could only rely on himself. Anyone who isn’t Hmong could not understand the inner workings of Hmong identity. Originally, Vue said thought his roommate would help in immersing him in western culture and help him with his English.

However, Vue said he hardly saw his roommate and had no connections outside of him.

Sitting alone at lunch and attending events by himself shifted Vue’s ideology, he said. For a while, he mentioned he only relied on himself and no one else.

Vue said he never wants students to feel as lonely and unseen as he once did. Having advocates and representation is crucial in student success.

“Charles is part of UW-Eau Claire’s history, he’s embedded within the full narrative of the campus. Those milestones are his story but also the story of the campus too,” Yang said.

Vue said he practices a non-judgmental approach when working with students. For them to open up about hardships, they must feel safe and respected. Lending support without biases allowed for a more sincere and honest relationship, Vue said.

Vue said, the main goal throughout his career was to help students advance to higher education and graduate. This can be reflected in his creation of a youth leadership precollege camp.

Vue said it equips both middle and high school students with the necessary tools in understanding the complexities of higher education and the options available.

Planting the seed for future generations has always been a passion Vue said. Although Vue is now retired, he said he will continue to support his community and Hmong students and families. True to his character, Vue mentioned he will still be just an email away.