Matthew Lehner, a first-year blugold, took steps in his political career by running for Eau Claire County Board. 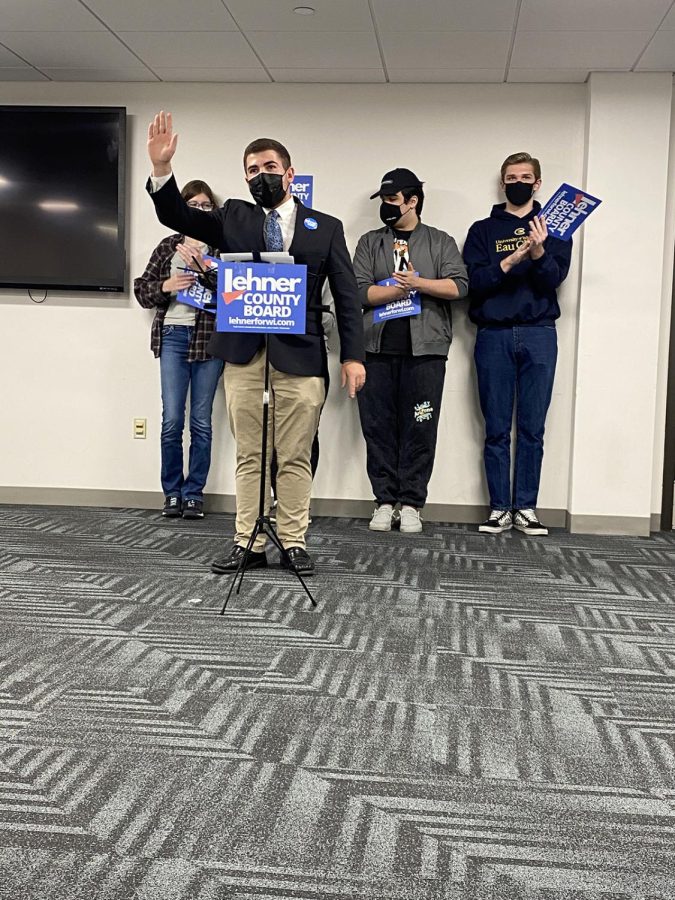 Lehner said the center of his campaign is formed around an alternative sustainability plan for Eau Claire County.

For 16 years, District 18 has been represented by Jim Dunning of Eau Claire County. This year, a UW-Eau Claire blugold wishes to change that.

Born and raised in Milwaukee, Wisc., Matthew Lehner, a first-year political science student, faces the first of two elections to be the representative for District 18 of Eau Claire County on Tuesday, Feb. 15.

“I’ve been politically active all my life,” Lehner said. “I’ve been active in the democratic party in my hometown and on the national level. I’ve made phone calls, knocked on doors, interned for a congressional campaign … Political science is my major of choice, so this is what I want to do.”

“I am very passionate about many issues,” Lehner said. “But my primary goal is to bring more active leadership to that position.”

Emily Casey, a first-year nursing student, said Lehner chose her to be his campaign manager for support, organization and to raise awareness in District 18 of his intentions for the election.

Casey said she’s always given Lehner good advice and it’s beneficial to have deep roots in the Eau Claire area.

“When I first came to (UW-Eau Claire), never did I predict that I would be a campaign manager,” Casey said. “Or at the very least helping with a local election.”

Casey said her goal for Lehner is to support him and provide guidance as he continues with his political career.

Lehner said his decision to come to UW-Eau Claire was an easy one.

“Eau Claire is my second home for sure,” Lehner said. “When I got here, one of the things I was really impressed by is that we have a very active and welcoming freshman class.”

He said one of the first things he participated in at UW-Eau Claire was a hall council interest meeting, where he planned to run for a smaller executive board position.

After serving as student council president in high school, Lehner said he decided his almost eight years of experience in leadership was a good way to start off small in college.

“In the meeting, they said ‘Well, who wants to run for president of Towers Hall?’,” Lehner said. “There was about two seconds of awkward silence, and then I said ‘Why not?’ So I ran unopposed at that.”

Within a short period of time, Lehner said he became a powerful council president for Karlgaard Towers Residential Hall at UW-Eau Claire.

Lehner said District 18 is made up of 66% college students, an important reason Lehner said he decided to run. He said local officials — although receiving small media attention —  have the opportunity to make an impact in the lives of their constituents.

“I believe we need somebody who looks like us, who breathes our air and who drinks our water in our buildings to represent us on the county board,” Lehner said.

The next election will serve as the spring nonpartisan election for the District 18 representative on Tuesday, April 5, according to the Eau Claire County website.