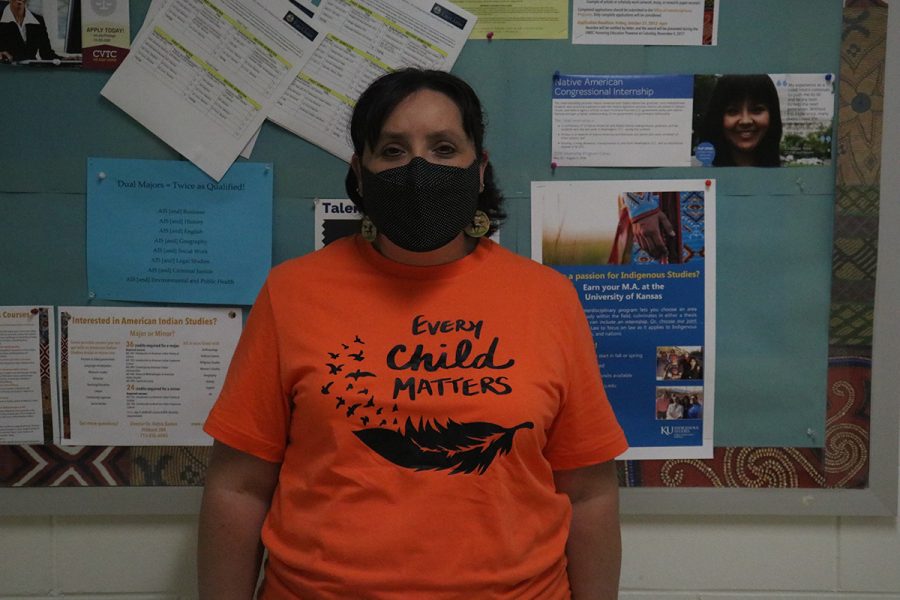 Associate Professor of American Indian Studies, Dr. Heather Ann Moody shows her support for the remembrance of indigenous children who were victimized within the Canadian residential school system.

On Sept. 30, students, faculty and members of the Eau Claire community wore orange shirts to commemorate the residential school experience of Indigenous children in Canada.

Orange Shirt Day gets its name from the grandmother of a young girl, Phyllis Webstad, who bought her an orange shirt to wear to her first day of school. This shirt was promptly taken from her as she entered the school and her belongings were destroyed.

Canadian residential schools (called boarding schools in the United States) were church-run schools that removed hundreds of thousands of Indigenous children from their homes, families and communities.

According to the National Native American Boarding School Healing Coalition, these schools punished children for speaking their native languages, banned them from traditional practices and forced them to adopt christianity.

Caroline Kernan, the Multicultural Admissions counselor, said the acknowledgement of the existence of boarding schools and the abuse Indigenous children experienced is an important step towards reconciliation and healing.

“I’ve had two generations of my family go through the boarding schools and saw firsthand the psychological toll it took on those family members,” Kernan said.

Kernan said Orange Shirt Day has helped society start to process generations old trauma and begin the long-needed walk towards healing and reconciliation. She also stated that the best way to combat ignorance is by being vocal, becoming informed, reading Indigenous media and donating to Indigenous causes.

“This year has been the first year Orange Shirt Day has been acknowledged on campus,” Kernan said. “This effort had been started by Indigenous faculty and staff and supported by students of color, particularly in the student senate.”

Wendy Makoons Geniusz, associate professor in the languages department, said part of wearing the orange shirt is so people can understand what happened, that the survivors are still here and that there is intergenerational trauma.

“Personally, my husband is a survivor of the American Indian boarding school system and a UW-Eau Claire alumni,” Geniusz said. “I live with the intergenerational trauma, the survivor impact and the PTSD from it everyday.”

Maggie Jensen, an associate Student Services coordinator, said Orange Shirt Day is important to recognize the pain and heartbreak caused by removing Native and First Nations children from their families and communities.

Jensen said these children were denied their cultural upbringing and basic human rights when they were sent to these schools. A major consequence of this is cultural ways were not passed onto the next generation, she said.

“When these children grew up and were able to leave these schools, many did not go back to live with their communities because they often felt that they did not belong there anymore,” Jensen said.

The goal of these schools was to assimilate these children and in many ways this process worked, Jensen said. Jensen added that not only did she encourage the Eau Claire community to wear orange shirts on Sept. 30, but to also continue seeking educational opportunities to learn more about Indigenous communities.

Snyder can be reached at @snyderlj0299uwec.edu