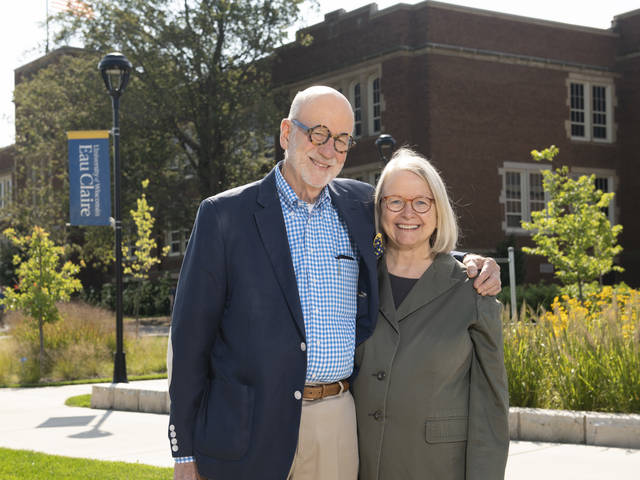 Brady and Jeanne Foust are longtime supporters of UW-Eau Claire and hope to encourage Blugold success with their donation.

Brady Foust worked at UW-Eau Claire for 38 years as a professor and head of the geography department. Jeanne Foust retired this year from Esri, a geographic information software company.

“When you’re in school, you’re paying people to learn,” Foust said in a video published by the university. “As a university professor, they were paying me to learn.  I learned more here than I ever learned in graduate school.”

After retiring from UW-Eau Claire, Brady Foust started the company HazardHub along with two former Blugolds.

“Brady is a great, passionate supporter of student success,” UW-Eau Claire Foundation president Kimera Way said. “He really followed his students. Challenged them. Helped tons and tons of them get jobs even after graduation.”

The scholarship will be given to students majoring in geospatial analysis and technology, who have maintained a 3.0 GPA and a second major, according to the UW-Eau Claire Foundation.

Foust believes in the emphasis of the double major, Way said, as a method to make students more ready and valuable for the workplace after graduation.

“Our motto has been ‘The Power of AND’,” Way said. “This scholarship really is the true power of AND. He (Foust) believes this will not only make students better prepared for the future in terms of jobs, but that this will also make them better human beings.”

Ezra Zeitler, professor and current department chair of geography and anthropology, said he is hopeful for increased department exposure due to the donation.

“We are always looking for more students in geography,” Zeitler said. “We hope and know the Foust’s passion reflects the passion of our department and field.”

Zeitler described the importance of the Foust’s focused donations.

“The magnitude of Brady and Jeanne Foust’s gifts to the university and to the Pablo Center reflect their passion for liberal education and the arts,” Zeitler said. “They are fierce advocates for the discipline of geography and its ability to shed light on — and provide solutions to — our world’s most salient problems.”

According to Way, the scholarship will fund four “Foust scholars” in the next two academic years.The fund will be a “sustainable revenue source” for future Eau Claire students.

Way said the Fousts’ impact on the Eau Claire community is enormous.

“The Foust’s are humbled by the opportunity to do something so lasting and meaningful, and we are just deeply grateful,” Way said. “The saying really is true here,“Once a Blugold, always a Blugold.”

For more information on the Foust’s and their donations, see the university press release.