Campus given five-star ranking for LGBTQ

For the fourth consecutive year, UW-Eau Claire has earned a perfect score for LGBTQ Friendliness 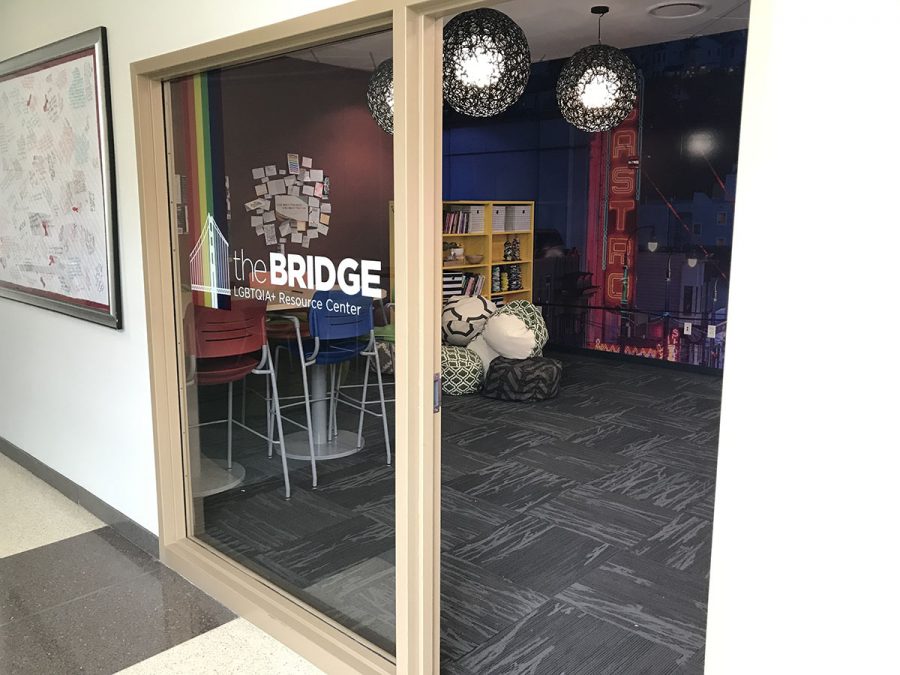 The Bridge, on the second floor of Davies Center, offers a safe community space for LGBTQ students.

The University of Wisconsin-Eau Claire has earned a perfect five-star rating for LGBTQ Friendliness from the Campus Pride Index.  This is the fourth year in a row that UW-Eau Claire has received the rating.

UW-Eau Claire is considered one of 27 “Premier Campuses” and is featured on the “Best of the Best” list — chosen from a pool of 46 five-star campuses listed on the Campus Pride website.

The Campus Pride Index evaluates schools on their LGBTQ friendliness as a resource for prospective and current students.The categories include policy, inclusion practices, housing and student life, among others.

Chris Jorgenson, director of the Gender and Sexuality Resource Center at UW-Eau Claire, said when the university first did the Index, it scored only two and a half stars. It took some time and effort to build up to that perfect five-star rating

After the five-star rating was achieved, the focus turned to sustaining that score, Jorgenson said, Campus Pride updates it’s rubric so that the five-star schools don’t just stagnate but keep improving.

Sustainability and progress are linked, Jorgenson said. If you keep pushing for progress, but it isn’t sustainable, then any progress can fluctuate. –Jorgenson suggests that the university must continually address how to improve campus for LGBTQIA+ individuals.

Regardless of rating, the campus isn’t perfect, Jorgenson said. He warns prospective students that they may still experience anti-LGBTQ sentiments, but the key is to have a community to fall back on when they do.

“You will always find people who hate you for who you are,” Jorgenson said. “But we have to find our own resiliency and thrive, despite that hate.”

One student spoke to the on-the-ground experience on campus.  Jackie Domin, a third year theater arts and music student, said she’s seen quite a bit of improvement in her own time here — from the opening and expansion of the Rainbow Floors, to more community education.

“We have a lot more education about the LGBTQIA+ community, for the general community,” Domin said. “But there is always more room for growth, acceptance, and support.”

Domin added that in her experience, there can be a lot of variation from day-to-day.

“There are some days where I feel the campus is just awesome and totally accepting,” Domin said. “Then there’s other days, where there’s microaggressions, or misgendering of students, things that make me feel like we haven’t made as much progress as we say we have.”

Domin praised Chris Jorgenson and Kallie Friede, associate student services coordinator at GRSC, for their work, as well as other resources and groups such as counseling.

Riley McGrath, director of Counseling Services, listed some of the resources that his department provides.

“We offer an LGBTQIA+ specific student support group,” McGrath said. “It can be a place for those students to connect with each other and realize they aren’t necessarily alone in some of these struggles.”

McGrath emphasized that LGBTQ students in particular often experience higher rates of issues with mental health, and highlighted outside resources as well, which can be found on the Counseling Service’s Gender and Sexuality page.

“The university has done great work to get these rankings, but I know that Chris (Jorgenson) and Kallie (Friede) and the GRSC are a huge part of that,” McGrath said. “They’re not doing it for the award or the accolades. They’re doing it because they care.

No matter how well UW-Eau Claire does, Jorgenson said, there will still be problems as a nation and world as a whole — very few campuses have an office like the GRSC, which Jorgenson called “infuriating” and “tragic for higher education.”

While Jorgenson, McGrath and Domin are happy with the work that the campus has done to achieve a five-star rating for the fourth consecutive year, the work isn’t finished, they said.

“This is difficult, challenging work,” Jorgenson said. “There’s so much room for improvement. I think we can pat ourselves on the back with one hand, but with the other hand, we are making a to-do list.”

Resources for mental health can be found at: https://www.uwec.edu/counseling-services/.

Gender and sexuality specific resources can be found at: https://www.uwec.edu/counseling-services/gender-sexuality/.

Find out more about the GRSC at: https://www.uwec.edu/equity-diversity-inclusion/edi-services-programs/gender-sexuality-resource-center/ .