The Sonnentag Complex: your questions, answered

Editorial Board speaks with UWEC personnel about project 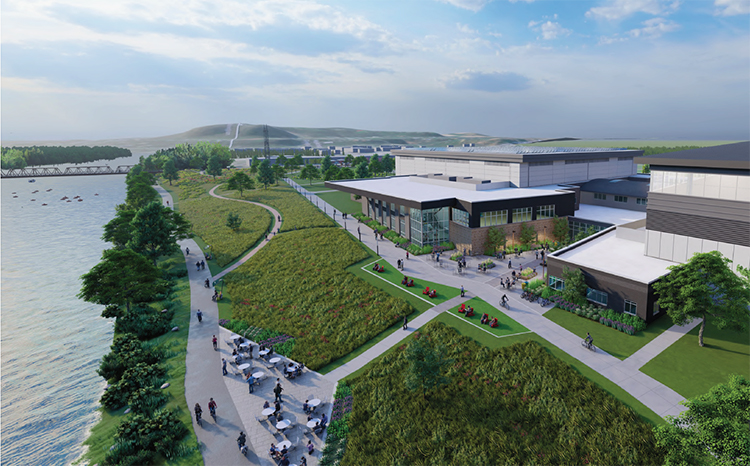 While official blueprints for the Sonnentag Complex and Event Center have yet to be created, this image comes from a copy of the project’s full-scope renderings.

Story by Editorial Board

Shortly after a referendum question regarding the Sonnentag Complex and Event Center was included in the Student Senate spring election, The Spectator staff began hearing complaints and concerns from the UW-Eau Claire campus community.

The question asked students to vote on the construction of the Sonnentag Complex and whether future students should pay an additional tuition fee of no more than $90 to support its operations upon opening.

After learning more about the project, The Spectator editorial board first released a staff editorial on April 22 about its concerns regarding The Sonnentag Complex.

Below, are the questions The Spectator editorial board asked the previously mentioned UW-Eau Claire personnel, as well as the answers we received.

Question: Where can students find the specific on- and off-campus members involved in the Sonnentag Complex design and construction? Are there links online or documents?

Answer: At present, there is not an explicit list of specific on- and off-campus members involved with the project on the Sonnentag Complex’s website.

The website does, however, list the complex’s project partners. This includes Eau Claire Community Complex Inc., the non-stock, non-profit corporation which will build and own the complex, as well as lease the space to key tenants.

In the meeting, Way said the past few student body presidents and other members of Student Senate have played a role in working on the project.

Up-to-date details on the project itself are yet to be posted.

An update on the Sonnentag complex has not been made on the website since April 17, when it was announced the project was being temporarily suspended due to COVID-19.

However, Knuth said this summer he and Wrasse will be working on updating and filling out the website.

Way also sent The Spectator a copy of the project’s full-scope renderings, which she said are close to the complex’s final design in terms of what the elements of the project will be.

Q: How has sustainability been discussed in the Sonnentag Complex design, prior to the Student Senate bill 64-B-16 being passed?

A: Wrasse said part of why the project is being completed through local partnerships — and not through the usual state process University of Wisconsin schools go through — is because there could be a greater emphasis placed on sustainability.

“I think one of the things the Chancellor sees in this project is the opportunity to send a message about our values,” Wrasse said, “and build that very much into the physical footprint of this shared and growing campus as we get more into the community.”

Way said $1.5 million of the city’s funding is going specifically toward sustainability.

She said project leaders are working with Xcel Energy, a company which is currently trying to get state approval for a program called the resiliency project.

The ultimate goal in working with Xcel Energy, Way said, is to create a totally resilient complex.

“The goal is that in the case of a manmade or natural disaster, the building would be off the grid,” Way said. “It would actually be totally solar, with backup batteries and things, so that if we had to shelter people for three to four days, they could be sheltered in the building.”

Way said project leaders are also meeting with prospective donors later this week to discuss how the team wants to go with being totally carbon neutral.

Overall, Way said the project’s modern construction principles aim toward receiving certification from the Leadership in Energy and Environmental Design.

On April 20, the senate voted to adopt Bill 64-B-17, which supports hiring a third party to ensure the construction of the Sonnentag Complex utilizes sustainable practices. LEED is one such third-party organization.

Way said buildings often don’t go for LEED certification because of the additional expenses associated with hiring consultants and some of the extra things that would need to be done.

“Our goal would be to build and design towards certification, but depending on if it’s going to cost the project substantially more money, we may not be able to get the actual certification.” Way said. “But the philosophy and the primary goal is to have substantial sustainability features throughout the entire building.”

Q: When will the final construction phase blueprint be released? If there isn’t a date, what month or what year? Why is there not a date set?

A: “We’ve expended donor money to do some initial designs, but we didn’t want to go full bore on a full design if we didn’t know if we had a project,” Way said. “We’re ramping up very quickly on getting full design.”

Way said next week project leaders will have a user group kickoff meeting where student leadership; Chris Jorgenson, the director of the Gender and Sexuality Resource Center; the admissions office; student leadership facilities; the Chancellor and vice chancellors will be invited.

“Once we get some design — more specific design — we’re going to continue to be happy to share that,” Way said.

Q: Similar to the construction and design of the new science building, are there any representatives of student government on the Sonnentag board of members? If not, why is this?

A: “We have two members of Student Senate who are on the ownership board and the actual board, as well as we’re involving them in the design process,” Way said, “so students have had the opportunity to be sitting at the table all throughout the process of the design.”

Q: Can you explain how this complex is going to be made accessible to students, since it is a distance away from campus? We have heard concerns from students about how they are worried that it won’t be easy to get there.

A: “When we first started talking to the student leadership under (former Student Body President Branden Yates), one of the issues that the student leadership at the time was very excited about is the fact that we house about 3,800 students on campus,” Way said, “and a significant majority of them live off campus in the historic Randall Park area, which is in close proximity to this project.”

One element that was appealing to student leadership in the initial stages of the Sonnentag Complex project, Way said, was that off-campus students who may have trouble getting to upper-campus facilities will have a facility accessible to them in the near future.

In terms of on-campus students, Way said project leaders are working with the City of Eau Claire to see if there could be a circulator bus route that would travel regularly between Sonnentag, Water St., campus, the Pablo Center at the Confluence, and downtown.

Outside of public transportation, the complex will also be accessible by foot, Way said.

“Of course, the Chippewa River Trail is right behind there and it goes directly to campus,” Way said. “You can even access the facility from upper campus if you walk along the sidewalk, and it goes down down the hill and across the bridge.”

Q: Future students will be paying for the complex through their tuitions while they are in school. They do not have a choice in the matter now, but will those students be able to share any concerns they might have in the future? How do you foresee this happening and how will you address these potential concerns?

A: “If you think about the Davies Center, which you all are enjoying right now, the decision made to pay for the Davis Center was made — 10, 12 years ago now — by students who voted on this,” Way said.

Way explained that none of the students who voted to renovate and expand the Davies Center ever got to enjoy it because the building and construction process took so long.

“So students voted for a fee increase that you’re now paying, that you didn’t have a single vote, in terms of whether you wanted to do it or not,” Way said.

Way said one of the most compelling reasons why she believes this project is good for students and the university is that the Spring 2024 graduating class will get to graduate in the Sonnentag Complex.

Way and Wrasse both said if the complex were to be built through the state, construction would not be finished until the mid-2030s.

“If we were going to do it the traditional construction way of this state, none of you would ever benefit from that building,” Way said. “(This way) the freshmen and sophomores on this campus, will be in that building, and will walk across the stage and receive their degrees.”

The Spectator staff can be reached at [email protected].