Following Pedal to Divestment, a resolution passed in Student Senate 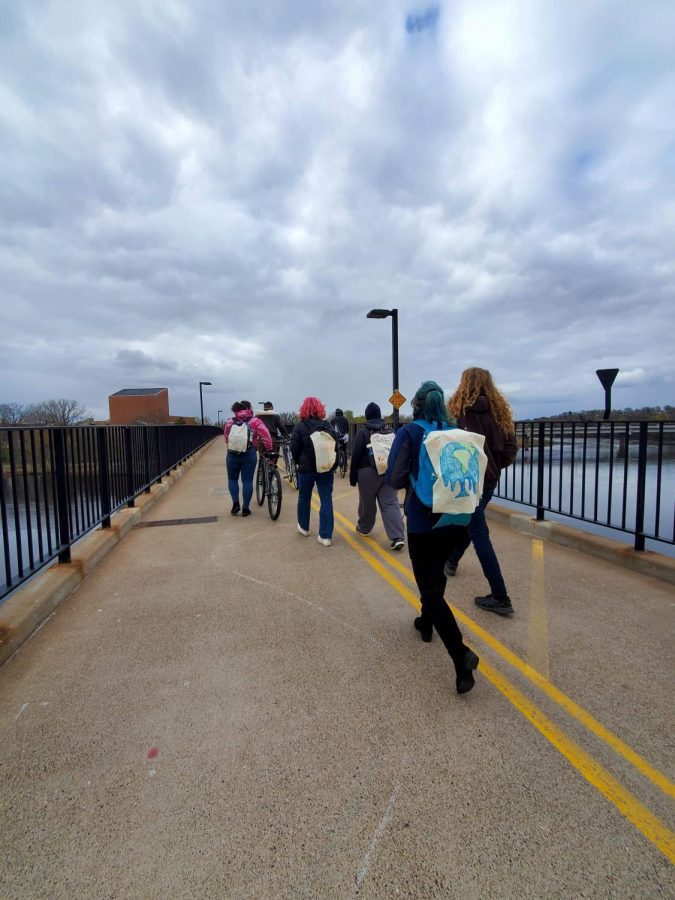 The resolution was presented following the Pedal to Divestment event on April 19.

Loeffler is an intern in the Student Office of Sustainability for the UW Divestment Coalition, she said.

As the acting link between UWDC and UW-Eau Claire, Loeffler is responsible for proposing legislation, planning events, programming, providing updates, writing the divestment resolution and more, she said.

Lauren Becker, a fourth-year environmental geography student and the director of SOS, said the divestment resolution was a long time coming.

“Originally, UWDC reached out to our office last year, and let us know they were circulating resolutions and they were looking to build a system-wide coalition in support of our UW System and our UW Foundation’s divestment from the fuel industry,” Becker said.

The resolution was written based on UW policy and procedure, Becker said. A resolution is passed after consultation, discussion and conversation, usually between the parties in the document.

Becker said she is incredibly proud of Loeffler and the resolution.

“This is a tremendous, beautiful piece of legislation,” Becker said. “I am so proud to be associated with it.”

It outlines the moral and health implications of investing in fossil fuels, but also the financial implications, Becker said.

“Investing in fossil fuels isn’t the smartest decision financially anymore,” Becker said. “It doesn’t provide the financial incentive that it has in the past. Forward-thinking foundations are already pursuing this, and we are assisting with that transformation.”

Loeffler said the resolution was intended to be educational.

“Some folks didn’t understand what divestment was and didn’t even know our university was invested in fossil fuels,” Loeffler said. “It goes into sustainability and all three of its pillars: social, environmental and economic justice.”

Interested people can read the full resolution on the Student Senate Legislation page.

Leading up to the passing of the resolution, Loeffler was not anticipating a positive outcome and thought there would be a lot more pushback from Student Senate, she said.

“Some people I talked to were hesitant at first to have a resolution like this go through the Senate,” Loeffler said. “They didn’t think it would pass because it’s considerably bolder than a lot of legislation that goes through the senate.”

Leah Woodward, a second-year English critical studies student, expected Senate would have a lot more reservations about it, too.

“I had been told by some people working with the Senate that they seemed unsure or hesitant about it,” Woodward said.

Becker said this is because, in the past, divestment has been considered a political conversation, but they can see that it’s not political anymore, considering the passing of the resolution.

The resolution was presented following the Pedal to Divestment event on April 19. The event, organized by Loeffler, Woodward and Hanna Dockter, a third-year communication sciences and disorders student, was a protest for the divestment from fossil fuels. To read more about the event, check out the preview and review on The Spectator’s website.

The concerns were nullified, though, when the resolution was passed unanimously — everyone agreed.

“I was filled with this incredible sense of hope,” Becker said. “It’s enlightening to see these students stand up against the investment in fossil fuels and fight for the mitigation of climate change.”

This is a step toward UW-Eau Claire honoring its commitments to sustainability and carbon neutrality, Woodward said.

“The resolution reinforces students’ passion and demand for sustainability and urges the administration and the foundation leadership to prioritize it,” Loeffler said.

It’s important to acknowledge that after the passage of the resolution, it has to go through a distribution list, Becker said. Students are communicating what they feel and it’s up to the foundation to do what’s needed next.

“Hopefully, the administration board will realize that divestment is what the students want, and maybe take a closer look at their fossil fuel investments,” Woodward said.

“Student Senate is the voice of the student body,” Becker said. “Admin can choose to hear the concerns and take action, or take them into consideration once the resolution has sparked dialogue and interest.”

Loeffler said this was a great start to the 65th Student Senate session and is looking forward to additional bold pieces of legislation, such as this resolution, throughout this session.

Lunderville can be reached at [email protected]