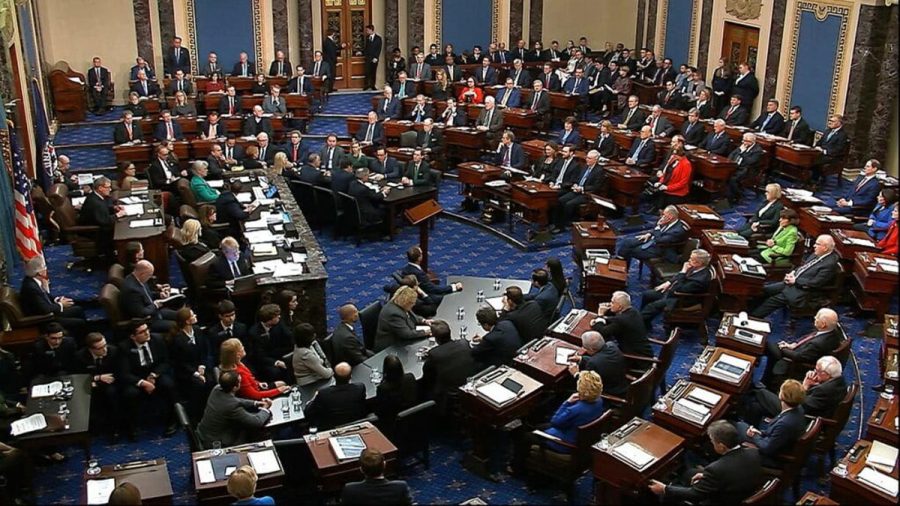 The U.S. Senate votes to acquit Donald Trump to bring his second impeachment to an end on Feb. 13.

The word impeachment has been seen in the headlines quite a bit in recent months, especially earlier this month as former president Donald Trump was impeached for the second time.

The Menard Center for Constitutional Studies sponsored a panel via Zoom, titled “Impeachment: Congress, the President and the Constitution” featuring three UW-Eau Claire professors Wednesday, Feb. 17, after the trial wrapped up in the Senate.

The panelists discussed the process of impeachment through the lens of the second impeachment case of Trump, which ended with an acquittal.

Specifically, the panelists attempted to answer three main questions during the panel.

What does the constitution say about impeachment?
What are impeachable offenses?
How does public opinion impact impeachment?

Fine started off the panel by discussing the specific constitutional language regarding impeachment.

“Words have meaning,” Fine said. “The words in the Constitution empower people, but they also limit power.”

Fine discussed each impeachment clause of the Constitution and how it applies to this particular impeachment case.

Fine said the main argument against impeachment in the case lies in Article Two, Section Four. It states the president, vice president and civil officers of the United States shall be impeached and removed for committing high crimes and misdemeanors.

Kasper followed Fine by discussing what impeachable offenses are and whether or not the charge against Trump was impeachable.

“The question here is whether or not incitement of violence is considered a high crime or misdemeanor,” Kasper said.

Kasper discussed the main defense Trump’s lawyers used during the case, which is an offense is not impeachable if it is not criminal in nature.

Kasper said this is basically what senators were weighing during the trial. Kasper pointed to words of a couple of Founding Fathers to say yes, an offense is impeachable, even if it is not criminal.

Kasper said James Madison and Alexander Hamilton shared the view that an offense deemed to be a violation of public trust is impeachable whether it is criminal or not.

“There is, according to some of the key founders and past precedence, some room for a non-criminal offense to be an impeachable offense,” Kasper said.

Peterson took over the panel after Kasper to discuss some of the political questions surrounding the second impeachment of Trump.

Peterson noted some differences in the polling and said there are so many reasons for this shift in support including the timeline of the impeachment or difference in charges this time around.

“In the end, we can see that support for the first impeachment remained pretty much constant at 50/50 throughout the whole process,” Peterson said.

The polling for the second impeachment looked a little different.

It showed support for the second impeachment of Trump was much higher than the first, but Peterson said the support wasn’t coming from Republicans.

“When we look at the data from the second impeachment we can see that most of the additional support is actually coming from independent voters, not Republicans,” Peterson said.

Peterson said there’s also a lot of other data out there showing many people just want these impeachment trials to go away.

Peterson wrapped up his discussion before the panelists opened it up to audience questions.

They spent over half an hour answering audience questions regarding media coverage of impeachment, political consequences of impeachment and how the most recent impeachment trial was different from those previously among other topics.

Kasper closed the panel by inviting attendees to the next panel on March 2. More information about the panel will be posted on the UW-Eau Claire Menard Center for Constitutional Studies Facebook page.