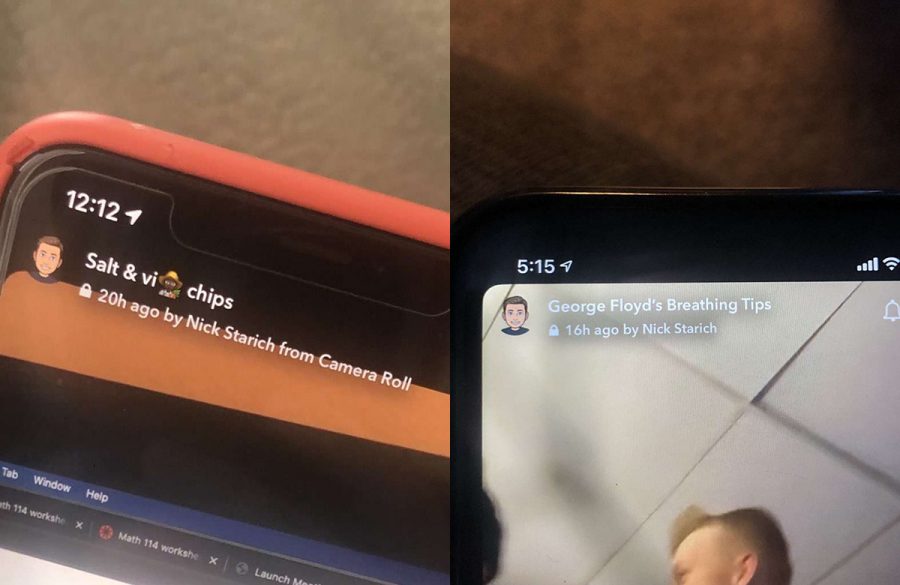 Photos of a student’s private Snapchat stories, titled with racist language, surfaced on and exploded across social media on the evening of Feb. 6.

Students and faculty at UW-Eau Claire are calling for justice after photos of a student’s private Snapchat stories, titled with racist language, were leaked on social media.

A private Snapchat story is a collection of photos and videos which disappear after 24 hours and can only be seen by select people. The name of the story can be changed.

At one point the story was titled “Salt & Vi* chips,” with an emoji of a Black farmer being used in reference to the N-word.

At another it was titled “George Floyd’s Breathing Tips,” referencing George Floyd, a Black man who died shortly after a police officer kneeled on his neck and pinned him to the ground for 8 minutes and 46 seconds during an arrest May 25, 2020 in Minneapolis.

Nick Starich, a second-year business finance and economics student, said he sent videos in the private Snapchat story the night of Friday, Feb. 5. Photos of the story were spread across social media beginning Saturday, Feb. 6.

While the incident draws certain parallels to that of the racist messages sent by members of the Blugold football team in November 2019, this case is expected to be handled somewhat differently.

Selika Ducksworth-Lawton, a history and women’s, gender and sexuality studies professor, said the case may involve a more complicated legal situation because it lacks a clear threat.

She also said administering a punishment which both gives consequences to the student involved and makes the victims feel like they have been taken seriously may prove difficult.

“The problem with the system code…is that it’s kind of all or nothing,” Ducksworth-Lawton said. “So finding something appropriate that doesn’t force the victims to have to swallow their outrage. That’s the hard part.”

Because of this, Ducksworth-Lawton said students from Black Male Empowerment are advocating for an update to be made to both the Blugold Student Conduct Code and the UW-Eau Claire Faculty and Academic Staff Rules and Procedures.

A document Ducksworth-Lawton shared entitled “BME’s Goal to Change Student Handbook and Faculty and Academic Staff Rules and Procedures Handbook” includes a list of alterations the organization hopes to make.

The (wanted) alterations read as followed:

Any form of racial harassment such as physical, verbal, or electronic harassment is an expellable offense;
Such hate crimes are in line with other federal anti-discrimination laws which prohibit discrimination on the basis of race, color, religion, sex, or national origin;
Electronic harassment can be defined as video recording, audio recording, voice calls, social media platforms (including group chats on any social media platform or any device) on any form of technology that targets specific organizations, ethnicities, religions, sexes, or national origins in a negative manner;
Creating a safe academic environment safe from discrimination for all students, staff and faculty;
The demands of BME from the incident last year;
The definition of harassment follows this Form from Wisconsin Code 947.013 on Harassment

Ducksworth-Lawton said she believes UW-Eau Claire could be hesitant in adopting these changes due to a 1991 court case in which a federal district judge shut down a systemwide hate-speech code.

According to a 1991 The Chronicle of Higher Education article, under the 1989 UW Rule, students were barred from using “slurs or epithets that were based on a person’s race, sex, religion, sexual orientation, disability, or ethnic origin” and would be penalized “if the slurs created a ‘hostile learning environment’ for someone.”

The American Civil Liberties Union filed a suit on behalf of the UWM Post and of several students who believed the code violated their First Amendment rights.

A statement released by Teresa O’Halloran, interim vice chancellor for equity, diversity and inclusion, said several reports were filed with UW-Eau Claire’s Bias Incident Reporting team over the weekend regarding the Snapchat stories.

O’Halloran said BIRT met first thing the morning of Feb. 8 to discuss the incident and is “now reaching out to the individuals who made the (BIRT) reports and to the student who made the posts, as well as offering support to students, faculty and staff impacted by the posts.”

Starich said he was hanging out with friends on Friday night when he posted a video of “two people having a really funny conversation” on the private stories he made, which he said only his friends were added to.

On Saturday night, Sophia Flood Elyafi, a fall Spanish graduate, then shared the screenshots on Twitter and posted about the incident in the UWEC Solidarity with People of Color on Campus Facebook group after receiving the screenshots from an undisclosed person.

In her post, Flood Elyafi asked individuals to contact “administration and the athletics department” about the racist incident.

Flood Elyafi said a former student sent the photos to her after receiving them from someone whose friend was on the private story.

From there, Flood Elyafi’s posts were shared across social media, receiving 108 reactions and 18 comments on Facebook and 135 retweets and 387 likes on Twitter, as of Feb. 9.

Kayde Langer, a fourth-year sociology student, was one of the individuals to post about the incident, mentioning Starich in a tweet that said, “real bold huh?” and including one of the screenshots of his private stories.

According to Langer’s Twitter, Starich then messaged Langer and said, “I apologize for my actions on that post, I’d really appreciate if you could take it down, I’ve apologized to everybody that was offended by the post.”

Blugold Athletics was tagged in social media posts in response to the leaked screenshots because individuals who shared them originally believed Starich was on the Blugold wrestling team. Starich confirmed, though, that he left the team last year.

Since then, Starich said he was fired from his job at Influence X and the company also denounced him on Twitter.

“It has been brought to our attention that one of our employees has been making racist comments and using unacceptable slurs,” Influence X said in a tweet. “We are taking all actions to distance ourselves from this behavior and make this right!”

Starich said he will meet with university administration regarding the incident and that he reached out to Ducksworth-Lawton on Saturday night to see how he can “make things right.”

“I just realized the volume of my actions,” Starich said. “I have no real excuse for what I did.”

Starich said he is continuing to work with Ducksworth-Lawton.

Shortly after this article was posted, Ducksworth-Lawton refuted this claim in a Facebook comment, saying “For the record, I have talked to the young man once. He is not working with me.”

Chancellor James C. Schmidt did not respond to The Spectator’s email request for comment.

In a statement provided to The Spectator, O’Halloran said UW-Eau Claire, as an institution, is working “to create a more inclusive learning community.”

“Hateful speech is antithetical to our mission as a university and as a community,” O’Halloran said, “and poses a threat to our ability to provide a safe living, learning and working environment for our students and employees.”

Ducksworth-Lawton said she believed the proper handling of this situation would have to involve administration providing resources to those hurt by Starich’s actions.

“I think that the victims of this — I think the students who had to see that, whether they were white or students of color, they need some support,” she said. “And I know that VC O’Halloran wants to give that support.”

In classes Monday, Ducksworth-Lawton said she spoke with her students about their thoughts on the racist incident.

“My white students in my classes today were angry and offended that this young man thought they would agree with that language and that kind of insult,” she said. “The black students were, ‘How long do we have to put up with this?’ And this guy has a black roommate, so you never know who’s going to stab you in the back, right?”

Flood Elyafi said she wasn’t surprised when she first heard about the incident.

“At this point it’s clear that there’s a pattern to this,” she said. “It happens every couple months, something big. So if they don’t address it now, it’s just going to keep blowing up in their face every time.”

Flood Elyafi said herself and a number of UW-Eau Claire students are organizing a sit-in Thursday afternoon at Schofield to demand transparency from administration and a change in campus policy regarding its handling of racist incidents.

Ducksworth-Lawton said she plans to attend the protest if she can, because she believes these changes are vital to the future of UW-Eau Claire.

“If this university doesn’t find a way to make students of color feel welcome, we won’t have enough students to have a university.”