Most to convert to remote delivery methods following the break 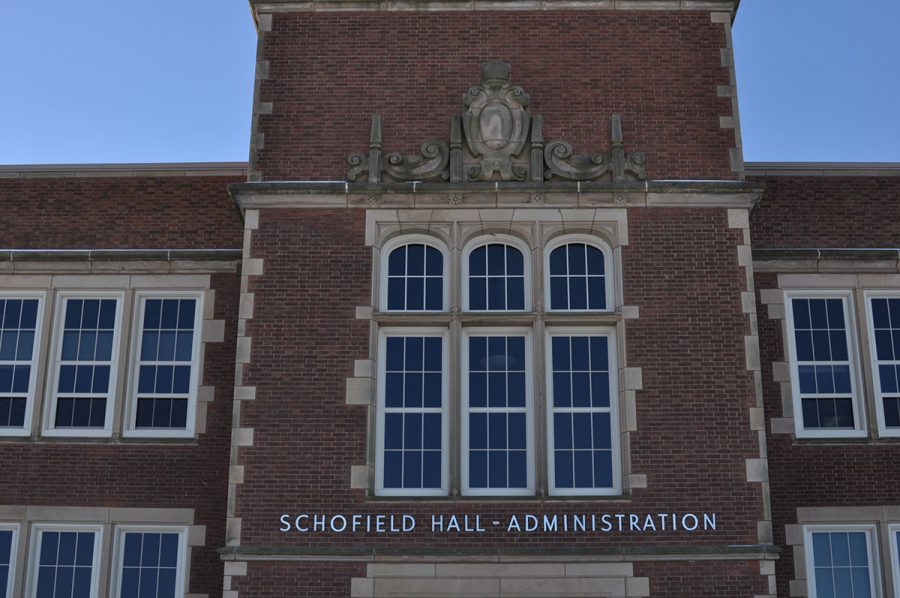 We should and do expect the UW-Eau Claire administration to address the issues of racism at an institutional level.

For nine of the 13 UW system universities, this means transitioning to a fully remote style of learning following fall break.

Read on to learn about the different campus specifics surrounding Thanksgiving break and the weeks following.

Chancellor James C. Schmidt said the university will transition to a fully remote educational delivery following Thanksgiving break in an update to campus faculty, staff, students and parents/delegates on Nov. 12.

This announcement comes in stark contrast to a video released by the university just two days prior, in which Schmidt announced a “new, increasing testing program that’ll enable us to return to campus after Nov. break.”

During a virtual Chancellor Briefing at 5 p.m. Nov. 12, he said this decision came in light of two events which occurred within the last 24 hours: regional hospitals reporting 100% capacity and Evers announcing Executive Order 94.

“I said earlier this week I was optimistic that we could return to campus after the break,” Schmidt said. “Nevertheless, in light of the increasing pressure on healthcare workers in our region and in the spirit of serving the public good as requested by the governor, we will follow his directive in doing all we can to help Northwest Wisconsin get the pandemic under control.”

Schmidt said the decision to transition to online delivery methods was made in conjunction with UW-River Falls and UW-Stout, who also released statements Nov. 12.

He said this decision was also made with the support of UW System President Tommy Thompson, Schmidt’s executive team, shared governance and student leaders.

Schmidt said the campus — including labs, the library, WiFi, dining service and residence halls — will remain open for students, faculty and staff who need them.

Students who will be traveling over Thanksgiving break, but wish to remain on campus during the rest of the semester, will be required to be tested once before traveling and twice over a three-day period after traveling, he said.

The same is true for faculty and staff who wish to conduct work on campus following the break.

“Even if you’re not coming to campus frequently, I’d encourage you to be tested frequently and consider it twice a week,” Schmidt said. “By living in the community, you are susceptible to pick up the virus, or if you have it, to spread the virus.”

More information about required testing and COVID-19 testing will be coming out in the next week, Schmidt said, and more information regarding the spring calendar will be released before Dec.

More information can be found on the university’s COVID-19 updates page.

Michael Alexander, UW-Green Bay chancellor, said the university intends to maintain its current mode of delivery for the remainder of the semester in an email to students Nov. 12.

Alexander said the school has the support of its healthcare partner, Prevea Health, and will follow both its, and the UW System’s, guidance if either one recommends changing course.

“I respect the decisions that other campuses have made across the UW System to not return after Thanksgiving and as always,” he said, “we will be prepared to make the same decision immediately, should we be advised to do so.”

Before leaving campus for the break, Alexander said students who live in residence halls are required to take a COVID-19 test. In addition, he said students will also be tested twice before being allowed to attend classes, in accordance with a plan made by Tommy Thompson, UW System President.

Alexander also said he recommends all students, faculty and staff who live off campus be tested once a week through free on-campus testing services.

Currently, specific plans regarding Thanksgiving and the remainder of the semester have yet to be announced by UW-La Crosse.

Under the plan released earlier this fall, the university is holding a mixture of in-person, hybrid and online classes.

According to the university’s calendar, Thanksgiving break will begin the night of Nov. 25 and classes will resume as usual the morning of Nov. 30.

In addition, Reesor asked students who wish to complete their studies in Madison to refrain from traveling home during the Thanksgiving recess.

“This is the safest option for students in this situation, based on the current levels of virus spread elsewhere in the state and country,” she said.

In addition, Reesor asked students whose circumstances require them to travel for the break to follow a list of guidelines regarding self-isolation and testing.

UW-Madison’s campus — including residence halls, libraries, RecWell facilities, study and dining spaces — will remain open for the remainder of the semester, Reesor said. However, some services will be limited after Thanksgiving break.

In an update released on UW-Milwaukee’s COVID-19 website on Nov. 10, the school announced courses would be continuing in the mode they’ve been taught throughout the semester — whether that be in-person, virtual or hybrid.

If they wish, the update said students can remain living in university housing over Thanksgiving break. Dining services will remain open, except for on Thanksgiving Day.

The update then listed several steps students can take to protect their friends, family and fellow students, including recommendations surrounding self-isolation and testing.

Andrew Leavitt, UW-Oshkosh chancellor, said the university would be continuing with its plan to continue face-to-face classes following Thanksgiving break in an email to the campus community on Nov. 12.

This action follows the plan announced in a Titans Return update released Aug. 6.

Leavitt said he encouraged students to consider their plans carefully and remain on campus for the break if they cannot travel home safely.

“This is important information for all of us,” he said. “We need to carefully manage our plans. The best way to keep ourselves safe is to keep our gatherings limited to those in our households and avoid travel.”

Leavitt said on-campus students who intend to leave campus for Thanksgiving must be tested once before they leave and twice upon returning before attending an in-person class.

To do this, UW-Oshkosh will increase its testing capacities in the week leading up to Thanksgiving, allowing 1,500 people to be tested before the break.

In a recent Ranger Restart communication, UW-Parkside faculty were asked to move all instruction to a remote mode beginning after Thanksgiving and continuing through the end of Winterim.

According to the communication, campus housing, dining services, the library, the Health and Counseling Center and the Sports Activity Center will remain open for the remainder of the semester.

Stephanie Johnson, editor-in-chief of the UW-Platteville Exponent, said the school has yet to send out information regarding Thanksgiving break specifically.

According to the school’s academic calendar, all classes will move online for the remainder of the semester after the November recess.

Johnson said currently the school is holding some courses online and some in person.

As stated earlier, UW-River Falls made the decision to move classes online following Thanksgiving break in conjunction with UW-Eau Claire and UW-Stout on Nov. 12.

Connie Foster, UW-River Falls chancellor, said in a campus announcement on Nov. 12 the campus will stay upon for students wishing to remain on campus during and after the fall break.

Foster said she recommends all students get tested prior to returning home for the fall break.

She also said students who wish to stay in the residence halls after leaving for fall break are required to be tested twice immediately following their return to campus.

In an email sent to students on Nov. 12, UW-Stevens Point said it plans to transition to online delivery methods after Thanksgiving break, as previously announced in an online statement on June 10.

According to the university’s COVID-19 website, students can choose to remain in residence halls through the end of the semester.

All dining services will be closed for Thanksgiving break, but will reopen Nov. 30 with limited hours and offerings.

As stated earlier, UW-Stout made the decision to move classes online following Thanksgiving break in conjunction with UW-Eau Claire and UW-River Falls on Nov. 12.

Katherine P. Frank, UW-Stout chancellor, said in a campus announcement on Nov. 12 that residence halls, dining facilities, the library and other buildings will remain open to students and employees throughout the rest of the semester.

According to UW-Superior’s Post-Thanksgiving Classes webpage, all courses will switch to online modes following Thanksgiving break.

The site said following the break classes which were being held in person should have at least one class per week delivered live on Canvas.

Residence halls will remain open, with dining services and antigen testing available. The library will be closed Nov. 26 to Jan. 11, but with materials and services available through curbside pickup or delivery.

According to UW-Whitewater’s Warhawks Return website, all courses will move to a fully remote mode beginning Nov. 21 and continuing for the remainder of the semester.

No other announcements regarding UW-Whitewater’s plans for Thanksgiving break and the remainder of the semester could be found online.