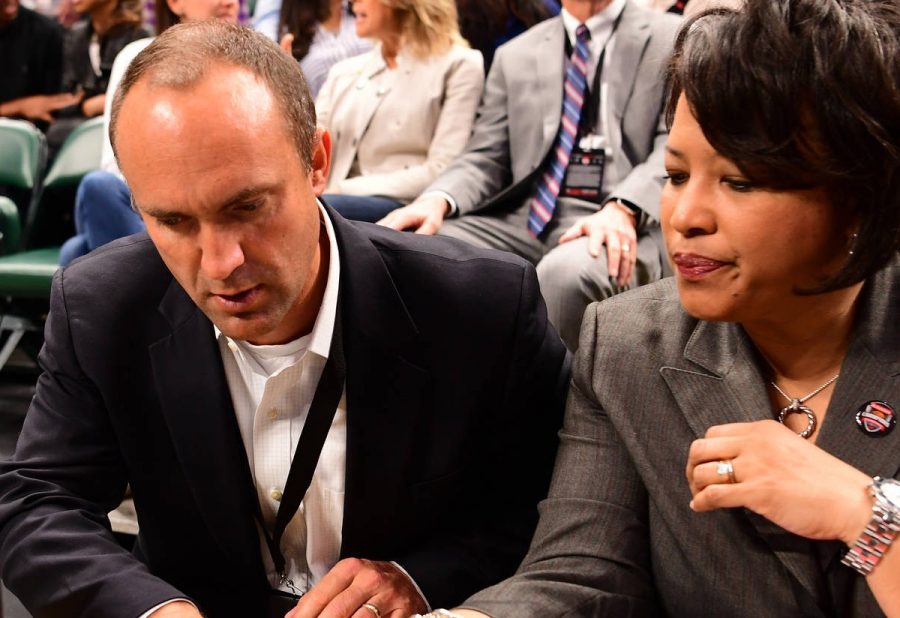 Overby started off his path to vice president at ESPN Events at UW-Eau Claire with getting into the sports information department.

Clint Overby said that as a small town kid from Waupaca, WI, coming to UW-Eau Claire was a life-changing experience.

“I think going to school is about finding out who you are,” Overby said.

Overby, a former student at UWEC, has worked as an executive at Entertainment and Sports Programming Network for 19 years.

Daniel Schumacher, the director of athletics at UWEC, said Overby is one example of many alumni from UWEC who have had success in the business side of sports.

“The College of Business at UW-Eau Claire has produced some unbelievable business minds,” Schumacher said.

Overby said he had always known he wanted to do something related to sports, but started off wanting to go into coaching.

Through his work as a student in the sports information department at UW-Eau Claire, he found himself taking an interest in the business side of sports.

Overby said once he started working in Tim Petermann’s office, who was the sports information director at the time, his path began “illuminating in front of (him)” and he knew he wanted to work on the business side of college sports in some capacity.

“They are the people that are doing all the behind-the-scenes work,” Millis said.

Overby said he lacked focus early on in his time at UW-Eau Claire, partly because he had not chosen a major yet and did not know what he was interested in pursuing.

“I think there’s always this traditional sense, you’ve got to pick a major when you’re 18 years old,” Overby said. “I think that’s hard to do for a lot of kids.”

Overby said as he became involved on campus with classes, sports and student government, it opened his eyes to different career opportunities and allowed him to hear many different perspectives and views.

Overby said he still applies things he learned in his classes at UW-Eau Claire to his career today.

With a business communications class in particular, Overby said he uses what he learned in that course all the time in his day-to-day job.

Overby said learning, in that course, about communicating in business through writing, articulating arguments and using writing as a selling tool are skills he uses constantly in his career.

After graduating from UW-Eau Claire with a bachelor of science degree in kinesiology and business administration, Overby went on to the University of Kentucky for graduate school to study sports management.

Overby’s first job after college was as a marketing manager for Host Communications in Dallas.

Three years later he was hired by ESPN to manage their relationship with the Big 12 Conference.

He has gradually worked his way up at the company, and in 2016 Overby was named vice president of the ESPN Events division of ESPN.

In his current role, Overby manages the day-to-day operations of the division’s 35 owned and operated events. He deals with sponsorships, ticketing, sales and many other facets.

Overby said he enjoys the variety of responsibilities he has in his job, as well as the opportunity to create and develop new opportunities.

Overby said when he started in the ESPN Events division, the company started with managing only two or three events, so seeing it grow to 35 events has been a rewarding experience.

“I’ve enjoyed every minute of watching this business grow and playing a role in that,” Overby said.