Katharine Thomas Hall to become a quarantine space in 2021 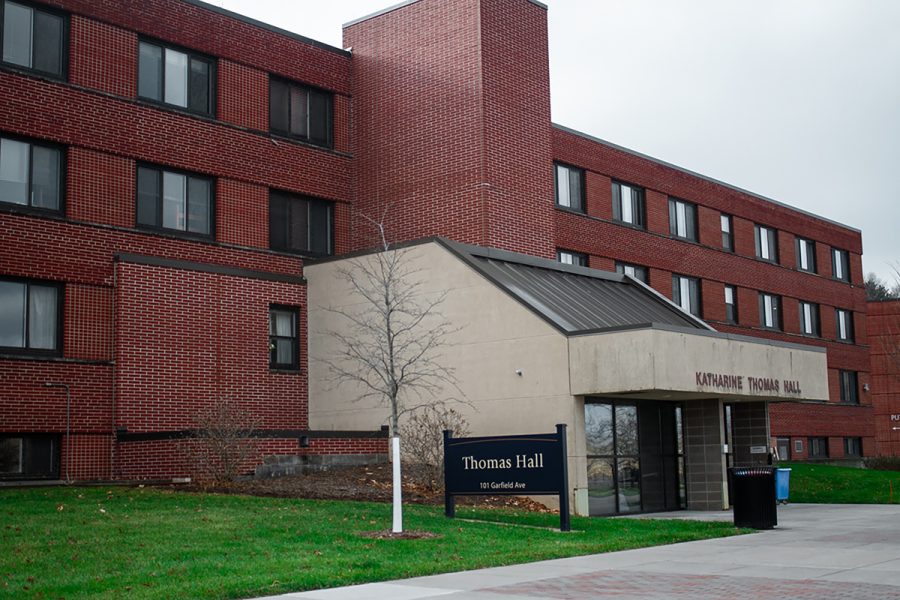 Katharine Thomas Hall, which is adjacent to Putnam Hall — the current on-campus quarantine and isolation space — will be an additional quarantine hall during the Spring 2021 semester.

Katharine Thomas Hall will become a quarantine space at the start of the Spring 2021 semester, as UW-Eau Claire prepares to test students for COVID-19 more frequently after winter break.

Quincy Chapman, the director of housing and residence life, said offering student testing has largely contributed to the university’s ability to stay open. At the request of the UW System, students will be tested more often next semester, but this will require more places for students to stay when they are in quarantine.

“When you increase (testing) frequency, that means that, at least in the short run, you may wind up with higher numbers of positive cases and quarantine cases,” Chapman said.

There were one or two situations this semester when quarantine and isolation space was “a little tight,” Chapman said, so they aim to double the amount of quarantining space as much as possible.

Katharine Thomas will be used for mostly quarantined students, or those who have been in contact with a person who tested positive for COVID-19, and Putnam Hall will be used for mostly isolated students, or those waiting for their results from a molecular COVID-19 test.
One of two accessible residence halls on lower campus
When Zach Caterer, a first-year mathematics and biochemistry student, received an email from UW-Eau Claire Housing on Nov. 13, he didn’t think anything of it at first.

Then he came across someone in the hallway outside his dorm.

“Did you read the housing email?” they asked Caterer, and when he said no, the person told Caterer, “You probably should.”

Caterer soon read the email and found himself saying, “That’s problematic,” when he discovered he would need to move out of his dorm in Katharine Thomas before the next semester.

According to the email, students living in Katharine Thomas will get a $200 housing credit on their spring semester bill as a relocation refund, and the university will also provide moving assistance to students during finals week, if they request it.

Caterer said he works at the Kwik Trip on Water St., so although he was irritated about having to move at first, he became excited about his new place at Aspenson Mogensen because he will be right down the street from his job.

Other residence halls on upper campus are accessible as well, Chapman said, but then some students with disabilities have to seek out transportation to travel down the hill, which is an added inconvenience for these students.

Because of this, Chapman said students with known and identified mobility needs were given the choice of staying in Katharine Thomas or moving to an apartment location.

These students are on a completely separate floor in Katharine Thomas and have their own private bathrooms, so Chapman said those who choose to stay in the hall won’t face a significant COVID-19 infection risk.
‘A lot of vacancy already’
Chapman said Katharine Thomas was chosen as the additional quarantine space for next semester because there was “a lot of vacancy already” in the hall.

Katharine Thomas has the capacity to house just shy of 150 students, Chapman said, but for the upcoming spring semester, only 105 students planned to return to that hall.

Since Katharine Thomas is adjacent to Putnam — the residence hall already designated as a quarantine and isolation space this semester — Chapman said staffing and meal delivery services for those halls will be more efficient.

For resident assistants who are currently staffed in Katharine Thomas, Chapman said some may have the option to move with their residents to a different hall.

Oak Ridge is one example of a hall where a wing was already under-occupied, so Chapman said a significant number of Katharine Thomas residents will be able to move to that wing.

“We look carefully at, could every single roommate pair relocate without us breaking a roommate pair in half?” Chapman said, “And we can.”
Uprooted mid-year
Sydney Cowden, a first-year elementary education student, said she plans to move to Towers North, but will miss the “community” she had in Katharine Thomas.

“I was definitely surprised,” Cowden said, “but one thing that COVID has taught us is that we have to be flexible.”

Emma Friend, a first-year integrated strategic communication student, said she and her roommate went “into a bit of a panic mode” when they read the news about having to move.

She said she was upset at first, but eventually became more concerned that the university feels they need to reserve another quarantine hall for next semester.

“I wondered, should we be coming back at all?” Friend said.