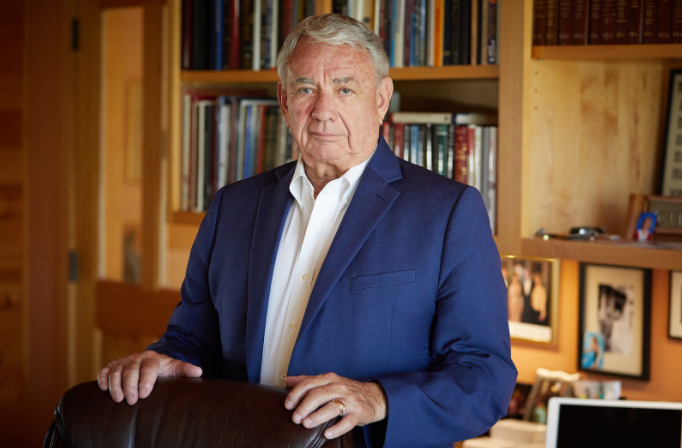 Tommy Thompson, the president of the University of Wisconsin system, mentioned UW-Eau Claire in his op-ed about COVID-19.

UW-Eau Claire’s response to COVID-19 caught the eye of UW-System president Tommy Thompson, who wrote about it in an op-ed published on Sept. 30.

“The university’s seniors delivered this message to the freshmen: We want to remain on campus and we know you do too, so take the virus seriously,” Thompson said. “The Eau Claire example is one of several ways the University of Wisconsin System has instilled a culture of responsibility,”

“President Thompson is right, we’ve got a true culture of responsibility and I couldn’t be more proud of how hard our students are working,” Schmidt said. “Socially distancing, keeping hands washed and adhering to the safety precautions we have in place is all credited to the smart and courageous actions being taken by our UWEC student body.”

Every UW school has similar yet different plans in place, according to Thompson. He said in his op-ed that UW-Oshkosh is testing students every week, as well as testing the wastewater in the residence halls to see the circulation of COVID-19. UW-Eau Claire’s response is called the Blugold Flight Plan.

“Our efforts of testing, adhering to the mask wearing, washing hands, staying 6-feet apart and daily monitoring of our health via the ‘Blugold Protocol’ app is working,” Schmidt said. “By monitoring health daily, our campus community is able to keep the threats of COVID-19 extremely low.”

Thomspon’s op-ed started in reference to the two approaches that have been working on the UW-Eau Claire campus: peer pressure to get people to follow safety guidelines and quarantines.

Warren Anderson, the vice chancellor for Equity, Diversity and Inclusion and Student Affairs, spoke about why quarantines were done at UW-Eau Claire.

“(The quarantines) were done out of an abundance of caution and in concert with our local health department,” Anderson said. “To this point, the majority of cases at UW-Eau Claire have not been in the residence hall population. The things that have been working, including what President Thompson notes, have to continue for us to continue to see a decline in our positive cases.”

Anderson also spoke about how the administration is ready for any scenario that may occur, which includes in-person classes, hybrid classes and online classes.

“What I can tell you is that the entire executive team is prepared for almost every scenario,” Anderson said. “That includes what to do if we see a noticeable spike in positive cases which cannot be managed in the manner in which we have, so far, seen success.”

Mark Pitsch, the media contact and director of media relations for the UW-System, also spoke on behalf of Tommy Thompson about the quarantines.

“Across the UW-System we have seen positive case numbers drop even when quarantines have lifted,” Pitsch said. “We have created on our campuses a culture of responsibility and we are proud of the way students have responded positively.”

Touching on the idea of future plans at UW-Eau Claire, Pitsch also spoke about the future students can expect to see on campus for at least this semester.

“We plan to continue a combination of in-person, hybrid and online instruction,” Pitsch said. “Students want to be on campus and we developed an aggressive testing strategy.”

North Skager, a third-year political science and music student, is also a moderator of the UW-Eau Claire meme page which has seen posts in line with what Thompson referenced in the first paragraph of his op-ed piece.

“Honestly, I think it is a lose-lose situation,” Skager said. “Obviously, the administration has taken a lot of criticism from students — perhaps rightfully so — but this administration is being forced to make many difficult decisions recently.”

While Skager is speaking to the opinion of the student body, he also has his own opinion on the situation, since he is in musical ensembles that need to meet in-person.

“It’s also worth considering that most students are exposed to the virus at parties or bars, or even within their living quarters,” Skager said. “So I’m not convinced that going online matters long-term.”

Like Skager, Joe Murphy, a fourth-year information systems student and student body vice-president, talked about the hard job of the administration, which is keeping the student body safe.

“We could very easily just do another online semester, but … the school would be facing very major cuts that would absolutely change students’ academic paths,” Murphy said. “If we don’t at least try in-person classes, there are going to be serious ramifications.”

The safety of the students, as Anderson and Schmidt had said, is top priority. At the same time, as Pitsch had pointed out, students want to be on campus for their education. This creates a disconnect between the students and the administration, according to Murphy.

“Fundamentally, students want to be safe on campus,” Murphy said. “If students don’t feel connected to the process or don’t individually feel good about the Blugold Flight Plan, it’s going to be really tough to get up and go to in-person classes.”

Strong can be contacted at [email protected].