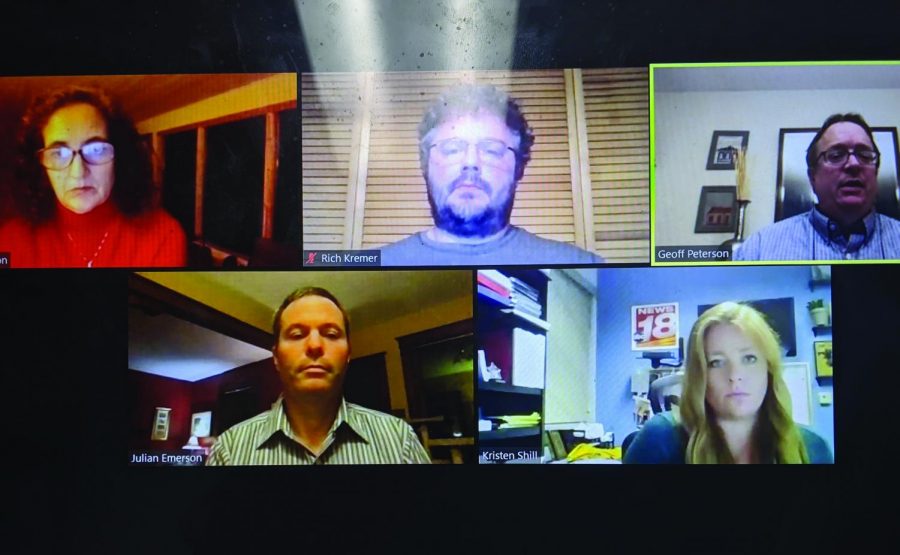 Panelists discuss the role social media plays in the spread of misinformation during the “Covering Political Campaigns: Do Facts Still Matter?” webinar.

Note: The Spectator was a co-sponsor of this event.

A webinar titled “Covering Political Campaigns: Do Facts Still Matter?” was held from 7 p.m. to 8:30 p.m. on Tuesday, Oct. 6 via Zoom in celebration of News Engagement Day.

According to the News Engagement Day website, the day is “an annual event created to encourage engagement with news and promote understanding about the principles and processes of journalism in a democratic society.”

To celebrate News Engagement Day locally, the Chippewa Valley Post and Wisconsin Public Radio, hosted a webinar where a panel of four local media members and a political science expert discussed a variety of topics ranging from how the COVID-19 pandemic has affected election coverage to how journalists ensure diversity in the news.

The event was co-sponsored by WQOW-TV, the UW-Eau Claire communication and journalism department and The Spectator.

According to the event description, this event was a part of a national effort to get people engaged with news in some way.

The webinar was moderated by the chair of the UW-Eau Claire communication and journalism department, Jan Larson.

The panelists provided their thoughts on social media’s role in the spread of disinformation and how journalists combat being labeled “fake news” by some viewers, among other topics.

Emerson said there is danger in viewers and readers assuming that the media is “fake news.”

“It could lead to fewer people choosing legitimate journalism as their news sources and getting their information instead from sources compiled by people with distinct leanings and no journalistic training,” Emerson said.

The journalists on the panel talked extensively about source-building and forming a relationship with readers to gain their trust and establish journalistic credibility.

Shill said there is so much misinformation out there right now that it is hard for people to know what is fact and what is skewed. Shill said that is why it is important that topics that the webinar covered be discussed.

“Anything we can do to help people differentiate between fact and those that are pushing an agenda is for the betterment of the entire nation honestly,” Shill said.

Peterson, as the only non-journalist on the panel, said that having these types of conversations are not only helpful in informing the general public, but journalists as well.

Peterson said sometimes people who have been doing journalism for a long time might think things are a certain way and not recognize how the landscape has changed and continues to change.

Peterson said having conversations like the one the panel presented can bring awareness to the critical changes journalism needs to make to deal with social media and the shift to online news.

“I think these conversations help bring some of that out, and hopefully bring people some focus,” Peterson said.

The big question of the night was whether or not facts still mattered in covering political campaigns.

While there were varying opinions among the panelists on the extent to which facts still matter, they all agreed that they do to some degree.

As the webinar concluded, moderator of the event Jan Larson addressed the big question of the night.

“I think we all agree the answer is yes, but that they are at risk in this political climate with so much being politicized,” Larson said.

The webinar was recorded and can be watched here.