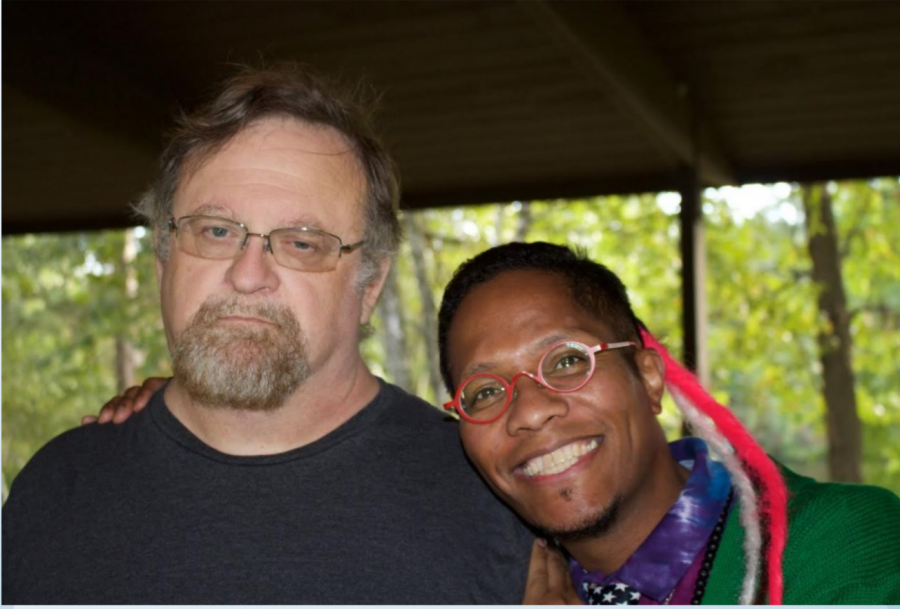 Michael Penkava (left) sits with aBa Mbirika (right) at “Math in the Woods” in Carson Park.

UW-Eau Claire students and faculty are mourning the death of a ‘beloved’ math professor, Michael Penkava.

“I know with students, he was beloved. He was beloved,” James Walker, a retired UW-Eau Claire math professor, said about the late professor.

According to his obituary, Penkava is survived by his fiancée Eva — who resides in Hungary — his brothers Daniel, Glenn and Robert, along with Robert’s grandchildren.

Penkava faced cancer for the last two years and died on the night of Sept. 6.

Penkava earned his Ph.D. in mathematics at the University of California-Davis in 1995. He later arrived at UW-Eau Claire in 1996 to achieve “extensive research in Cohomology of Graded Associative and Lie Algebras, Algebraic Structures Arising in Mathematical physics” and more, the obituary said.

Smith said he admired his research in these areas so much that he was jealous of Penkava’s research abilities.

“He was prolific,” Smith said. “Publishing in math is not easy and yet, he published so many. He could just churn them out and I was astonished at that.”

Smith, who knew Penkava for 24 years, said his achievements were not just in math. One of the first projects he worked on was redesigning a classroom. Together, they created an ‘active learning’ classroom, which comprises a handful of round tables with computers on them so students could work together easily.

The room in reference on UW-Eau Claire’s campus is located in Hibbard 309B. They sent it as a proposal to the National Science Foundation and it has since been implemented in schools everywhere; they were pioneers, Smith said.

Another of Penkava’s achievements was his push for undergraduate research. He helped several students publish work of their own, Smith said.

“Back in the 1990s, undergraduate research was not really a thing at UW-Eau Claire — or anywhere for that matter,” Smith said.

Penkava was on the forefront of involving undergraduates in research in the math program, Smith said and getting math students to collaborate with him was a huge passion of his.

Some of Penkava’s other passions included walking. He would do daily fitbit challenges and often walked 10 miles a day, Smith said. He was also a gardener and tended to vegetables at his home.

Penkava’s particular interest in Hungary was doing research with a woman named Alice Fialowski, with whom he wrote many papers and publications on topics like Lie algebras and mathematical physics, Smith said. It was also where he met his fiancée, Eva, who visited the states recently during his battle with cancer.

Perhaps his most memorable qualities, Smith, Walker and Culles said, was his story-telling and humor.

Culles took Penkava’s Math 109 class and said going to his class was like watching a comedy. He would tell stories from his past to make the class laugh. Culles said he would also do funny things like refer to himself in the third person, or keep a pet wasp in his office.

Penkava’s office was always flooded with students, Culles said. He said Penkava always encouraged students to come to his office hours if they had a question, but because the students loved him so much, there would be so many of them in the hallway that there would be nowhere to sit.

“I never went to his office hours because I had a question, I just went there to hear his stories,” Culles said.

Sometimes there would be so many students that it disrupted other faculty because of all the noise, Smith said.

Penkava wasn’t just a man who joked around all day though, Culles said. While he was the funniest professor he has ever had, Culles said he was also “very effective” in his teaching style and “easily accessible” when you needed help.

Culles said Penkava would have late night study sessions at 9 or 10 p.m. and these were “extremely helpful” for preparing for a test that would be the next day. He went to all of them.

When he thought of what he admired most about Penkava, Walker said it was his devotion to his students and his field.