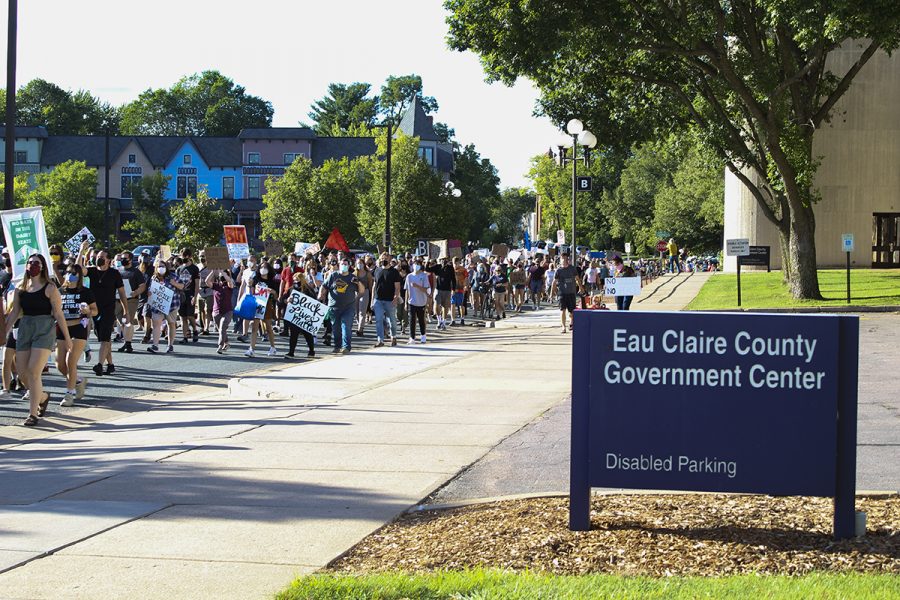 Demonstrators march in the Justice for Jacob Blake Solidarity Protest Aug. 29, which began in Randall Park and ended outside the Eau Claire County Government Center. Selika Ducksworth-Lawton, history professor at UW-Eau Claire, president of Uniting Bridges of Eau Claire and a speaker and organizer of the event, said she estimated around 2,000 people participated.

Hundreds of people were gathered in Randall Park on Saturday when Luke Seidel, a third-year political science student at UW-Eau Claire, encouraged everyone to ask themselves, “Why are you here?”

Seidel was among several individuals who gave a speech before the group marched to the Eau Claire County Government Center to protest racial injustice, following the shooting of Jacob Blake on August 23 in Kenosha, Wis.

Selika Ducksworth-Lawton, a history professor at UW-Eau Claire, president of Uniting Bridges of Eau Claire and a speaker and organizer of the event, said she was at the protest because she wants every community in Wisconsin to have what Eau Claire has.

“I want people who have great power to exercise the responsibility of that and not profile us,” Ducksworth-Lawton said. “I want us to live in a world where people don’t make a decision on you because of how you look.”

Uniting Bridges, a nonprofit organization that “combines the forces of many local organizations advocating on behalf of under-represented groups in the Chippewa Valley,” has been working with the Eau Claire Police Department for ten years, Ducksworth-Lawton said.

“What we want to do is to work with Eau Claire police to get the reforms that we’re all talking about,” Ducksworth-Lawton said, “and what we want is to work within the system and show people that if we work together, peaceful protests and peaceful work can get things changed.”

Josh Miller, the Eau Claire Police Department’s public information officer, said the event’s organizers worked with the police prior to the event to discuss plans and ensure the safety of all individuals involved.

Miller said there were no damages, arrests or citations issued during the protest.

“We believe this speaks to the care and commitment our citizens have to their community,” he said.

To answer the question he posed — “Why are you here?” — Seidel said his participation stems from his involvement with the Eau Claire Justice League, which is a grassroots community organization that formed after the death of George Floyd.

Seidel said they are calling for tear gas to be banned in Eau Claire because of its short-term and long-term health effects.

Chlorobenzylidenemalononitrile, which is commonly known as CS, is a compound considered to be a “riot control agent” that may cause excessive burning at the eyes, shortness of breath and nausea, according to the Centers for Disease Control and Prevention.

Seidel said CS is confirmed to be in Eau Claire.

“They have CS gas in this building,” Seidel said as he gestured toward the County Government Center. “Tear gas is the catalyst of most situations between police and protesters. It’s the final breaking point before fire and riots and that’s why we’re against it.”

Jaylin Carlson, the founder of Eau Claire Justice League and a recent graduate of UW-Madison, said she was born and raised in Eau Claire and has found that change needs to happen.

Members of Road 2 Freedom, a motorcyclists’ rights organization which supports the First and Second Amendments, watched the protest from a short distance at both Randall Park and the County Government Center.

At the County Government Center, Ducksworth-Lawton told the crowd that after speaking with the bikers, she learned they were there because they thought someone was going to burn down the jail, but had also come supplied with water to give to protestors.

“I’m a Christian, and Jesus said to make an enemy your friend,” Ducksworth-Lawton said, “and Martin Luther King (Jr.) said the best thing we can do is reconcile so we practiced that today. It doesn’t have to be them vs. us, it can be everybody and that’s why I’m here today.”

Mike Dickinsen, a member of Road 2 Freedom, said the group came to protect the jail and the people marching.

“I don’t want to call it a protest, to me it was a peace march or something,” Dickinsen said. “But what we were here for is this – On the protests, there have been burning, looting, cars being burned, people’s businesses burning … and we’re like, ‘Why are you doing this to your own?’ We love Eau Claire and so we thought, we’re going to come here and help a peaceful protest.”

He said the group does not agree with the name of “Black Lives Matter” and would prefer the focus was on “All Lives Matter,” because it feels more like unity.

“Now for me, what happened over there today?” Dickinsen said. “That was good. I gave hugs today and they gave hugs to me and I didn’t know them. But there is unity. We are going to try to come together on some other things.”

Rachel Pride, an AmeriCorps member who led demonstrators in chants during Saturday’s protest, said she was at the event because she wanted her voice heard.

“We’re not going nowhere,” Pride said. “Black people were brought here and this is our country too.”